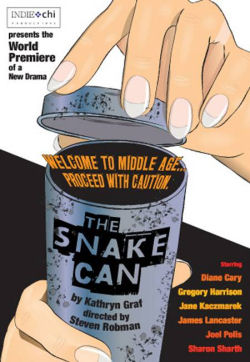 It’s hard to be middle-aged. It’s even harder if you’re middle-aged and female and looking for love. Well, at least that’s the premise of Kathryn Graf‘s new play, “The Snake Can“, which we saw last night at The Odyssey Theatre Ensemble in West Los Angeles.

“The Snake Can” tells the story of three women, all in their early 50s: Nina, an artist, who recently separated from her husband Paul; Meg, who is twice divorced; and Harriet, a writer, widowed 7 years ago after a number of years of a loving marriage. All are navigating the rocky relationship waters, attempting to find both themselves and relationships in the modern world. The play concerns this questions. Each of the women’s story is somewhat separate, except where the women get together to talk to each other about their relationship problems. Harriet, a homemaker and stay-at-home mom from the suburbs, has finally decided to go after new relationships, and is doing it through a website called matchmaking.luv (ummm, yes… it seems authors don’t always understand the domain naming system). She has met a man named Stephen, and has to overcome both his past and his reluctance to commit. This past, mind you, includes a number of bisexual years that included a man named Brad. Nina is less navigating dating than navigating separating from her long-time actor husband, Paul. She’s had her bootie calls, but is flinging herself into her art (literally) more than dating. Meg, who is perhaps the smartest of them all, has had a series of relationships but nothing seems to work. All three seem to love to drown their sorrows with copious amounts of wine (hmmm, they would fit really great into Cougartown). By the time the play ends, all have learned something about themselves, and have found some sense of closure in their relationships.

The direction by Steven Robman is smart, and the situations presented by the women draw you into the story well. As for being realistic — well that I’m unsure of, but then again, I haven’t dealt with the dating scene since the 1980s! If anything, they gave me the sense of being a little too earnest, and the resulting story had a bit of a sitcom feel to it. That could also be the side effect of having to squeeze all the character growth and driving situations into 120 minutes. The types of women portrayed did feel right, and I’ve certainly seen men like that before. One got the sense that these were people who wanted the relationship for the comfort of the relationship, not particularly for anything physical. The play also resonated well with the older middle-aged audience found in the theatre today. All in all, it was an enjoyable evening.

Much of this came from the performances of the acting team. In the lead positions were Diane Cary* as Nina, Jane Kaczmarek* as Harriet, and Sharon Sharth* was Meg. All came off as realistic, and I particularly enjoyed the performances of Sharth and Kaczmarek. Sharth, as Meg, as beautiful and accessible, and exuded a wonderful air of confidence. Kaczmarek, as Harriet, gave off the suburban wife vibe well, although drinking a bit much (I hope that was stage alcohol, or those actresses might need a driver at the end of an evening). Cary was a little bit colder as Nina, but I also enjoyed her character.

In the two main male roles were Paul Lieber as Paul and James Lancaster* as Stephen. Lieber’s Paul struck me as a bit of a looser Malcolm McDowell, but that could be a look thing. You could tell from Lieber’s performance that this was a man having trouble navigating the relationship waters as well. He wanted to be with his wife, who no longer wanted him, and really didn’t want to date. He just wanted the comfort of what he had. Lancaster’s Stephen was different — a character who wanted a relationship with a women and who had been bisexual in the past, who could never seem to make relationships of either type work in the long run. He was scared of having relationships work, and portrayed this quite well.  Rounding out the male cast was Joel Polis* as the boyfriend Jake and Stephen’s former lover, Brad.
[*: Member of Actors Equity]

Turning to the technical: The set, which was designed by Jeffery P. Eisenmann, worked reasonably well. The apartment side of the set worked well, although the textures on the wall interfered with the excellent projections of Hana S. Kim. The props by Lorely Trinidad worked well. The set was well lit by Adam Blumenthal, and the sound design and sound effects of Cricket S. Myers were (umm) effective. The costumes of Miguel Montalvo were appropriate to my eye and conveyed the period well. Liana Dillaway was the Production Stage Manager, assisted by Priscilla Miranda. “The Snake Can” was produced by Racquel Lehrman.

“The Snake Can” continues at The Odyssey Theatre until March 2. Tickets are available through the Odyssey; discount tickets may be available through LA Stage Tix. It is worth seeing. Upcoming productions at The Odyssey include “Rank” by Robert Massey (3/23 – 5/12) and “Annapurna” (by Sharr White). Other productions listed that intrigue me include “Ionescopade: A Musical Vaudeville“, built around th eplays, playlets, and poetry of Eugene Ionesco (6/8 – 7/28/2013); an all-female casting of “Hamlet” featuring Charlayne Woodard as Gertrude (8/17 – 10/13/13), and a “Waiting for Godot”-esque play called “Old Clown Wanted” about three out-of-work circus clowns marking time in a deserted office.

Dining Notes: As we were on the Westside and had just hit Record Surplus (where we scored with loads of music, including a French-cast-album of Hair), we decided to explore nearby restaurants. We ended up at an excellent Oaxacan Mexican restaurant on Santa Monica called Monte Alban. Yummy and different. We’ll be back.

Upcoming Theatre and Concerts:   March starts with “I’ll Be Back Before Midnight” at the Colony. The following weekend sees us in North Hollywood for “Company” at the Crown City Theatre. The third week of March takes us to the Pantages and Hollywood for  “Catch Me If You Can”on March 16. The fourth week of March brings “Boeing Boeing” at REP East on March 23, and ends with “End of the Rainbow” at the Ahmanson on March 30. April has less theatre — so far, only one show is scheduled. The first weekend of April is open. The next weekend brings with the Southern California Renaissance Faire.  Following that is “Grease” at Cabrillo Music Theatre, and April concludes with a winetasting at Temple Ahavat Shalom. May is busy in a different sense, with two concerts — Elton John in Las Vegas on May 4, and (tentative) Michael Feinstein at VPAC on May 11. May also brings “Falling for Make Believe” at The Colony Theatre and “To Kill a Mockingbird” at REP East. Lastly, continuing the look ahead, June will bring (tenative) “The Scottsboro Boys” at the Ahmanson Theatre, “Priscilla – Queen of the Desert” at the Pantages, (tentative) Sweet Charity“ at DOMA, and the Western Corps Connection at the end of the month. I’m also keeping my eyes open as the various theatres start making their 2013 season announcements. Lastly, what few dates we do have open may be filled by productions I see on Goldstar, LA Stage Tix, Plays411, or discussed in the various LA Stage Blogs I read (I particularly recommend Musicals in LA and LA Stage Times).