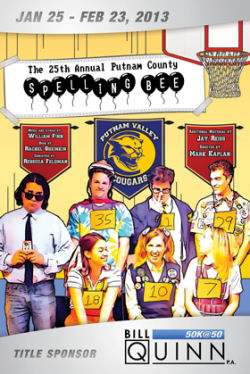 There are some shows you never get tired of seeing (and others for which one performance is more than enough). One of the shows high on my repeat list is “The 25th Annual Putnam County Spelling Bee” (although you think by now is would be past number 25–I think although they can spell, they can’t do math!), which we saw last night at the Repertory East Playhouse in Newhall, CA. This is our third time seeing the show: the first was in 2007 with the original Broadway cast at the Wadsworth Theatre; the second was in 2009 at LA Valley College with a student cast. I’m pleased to say the REP cast was equal to if not better than both those casts. REP also made some interesting casting choices which made you look at the show a little differently.

The 25th Annual Putnam County Spelling Bee (music and lyrics by William Finn, book by Rachel Sheinkin, conceived by Rebecca Feldman), tells the story of six mitsfits at a local Spelling Bee, and their quest to win the Bee. However, these six aren’t the only participants in the Bee: there are also four audience members drawn at random (based on interviews held before the show), who sink or swim on their own. In the first half of the Bee, you clearly know who will win (the cast members) and who will lose — the fun part is learning the back-stories for the competitors, and seeing the crazy introductions the writers have — both for the cast members and the audience participants. The words given to the audience participants differ every show, and the audience members are encouraged to play along by asking for definitions and sentence use. The resulting answers are often some of the funniest moments in the show. The second half of the show is the serious competition, with the final five contestants being winnowed down. During this part you learn more about the kids and see how they grow — and what is really inside of them.

The six real contestants in the Bee are:

Rounding this out are Rona Lisa Peretti, the mistress of ceremonies and the #1 realtor in Putnam County; Douglas Panch , the vice-principle serving as judge, and Mitch Mahoney, who is doing his community service by comforting kids when they lose. The story itself is the competition of the Spelling Bee and the interaction of the contestants, working its way up to the final winner.

What makes Putnam County succeed or fail is its cast (well, and the direction, but I still have trouble separating direction from performance). REP’s cast was excellent; they didn’t have that long-in-the-tooth problem that the Broadway cast had, and were still able to bring youthful exuberance to the production. As I noted before, the director (Mark Kaplan/FB) made some interesting casting choices that injected a little difference into the show — in a good way. So let’s meet the team:

As Marcy Park, Kelly Bader/FB was a departure from the typical casting. Normally, Marcy is cast with an Asian actress, bringing out the stereotypical over-achieving Asian. Bader gave off a more parochial schoolgirl vibe, making her more the blonde overachiever you hate. This make you look at the role and the character quite differently. Bader’s performance was strong, especially her movement and dance.

As Leaf Coneybear, Lucas Moore/FB brought a wonderful spirit and energy to an offbeat character. He struck me as that slight-autistic or Aspberger’s kid you  knew in school — in his own world and quite happy there, but with a magical power to excel in selected areas. He also did a great job of portraying one of Logainne’s two dads. He was a delight to watch.

As William Barfée, Kevin Rhedin/FB did a wonderful job.  Every Barfée I’ve seen has been very different. The original, Dan Fogler, had this manic energy to the character. At LAVC, Paul Dietz brought a different vibe with a look and foot I initially didn’t like. Rhedin’s Barfée was a disheveled outcast focused on winning, but you could see that inside the character was a scared boy. Rhedin did a great job of portraying the transformation that came over Barfée when he was able to spell a word without the foot: you could see a visible confidence grow. This is great acting.

As Olive Ostrovsky, Mary Grace Wilson/FB was perhaps my favorite performer in the piece. A strong singer, a beautiful face, and great movement and comic timing made Wilson just a delight to watch. You could see, in her performance, that there was a very strong girl under the initially unsure character. Wilson is evidently in a relationship with Rhedin, and brought a wonderful chemistry and unspoken connection between Wilson’s Ostrovsky and Rhedin’s Barfée.

As Logainne Schwartzandgrubenierre, Annie Ramsey Lewis/FB brought a bunch of fun to the role. I was initially unsure about Lewis, as the speech impediment of the character was a bit strong, making it hard to understand what she was saying. But her performance was great, saying in character, with the impediment, not only through the spoken parts but through the sung parts as well. Again, fun to watch, but in a different way. She was also part of the other couple in the cast, although I didn’t notice any unspoken interplay with her spouse.

As the last student, Chip Tolentino, K. C. Lindley/FB conveyed the Boy Scout notion of wanting to be the best well, which made it all the more effective when he lost. I was a bit worried, however, at the start of Act II when he was lobbying candy at the audience; it gave a different meaning to “you could put an eye out with that thing!”.

Rounding out the cast were Sarah Krieg (FB) as Rona Perretti, Richard Van Slyke (FB) as Douglas Panch, and Jason J. Lewis (FB) as Mitch Mahoney. Krieg was amazing (and not for being the first cast member so far to actually have her own webpage). Normally Rona is a role you don’t notice that much, but Krieg had such a wonderful singing voice and presence that you were just drawn to her performance. Well done! Van Slyke’s performance has Panch was the typical VP you never liked, which worked well. I’ve always wondered about that character’s backstory. Lastly, as Mitch Mahoney, Jason Lewis (the other Lewis in the cast) was a departure from the traditional Mahoney casting. Traditionally, Mahoney is cast as black to build upon the stereotype of the menacing black ex-con. Lewis’s Mahoney was more hoodlum; a powerful angry man you wouldn’t want to meet in a dark alley. This brought a different vibe to the character, but worked well.

In addition to Mark Kaplan/FB‘s direction, Leslie Berra (FB) served as vocal coach and assistant director. Berra deserves compliments–the singing of this cast was excellent. Nancy Alterman provided the choreography, which was effective in the small space. The music for the show was pre-recorded; alas, the REP does not have sufficient space for live music in productions.

Turning to the technical. There was no specific credit for the scenic design, although Madi Orgill/FB, Mikee Schwinn/FB, and Ovington Michael Owston/FB constructed the set. The set was a more cartoon-ish gym (as opposed to the realistic gym of the Wadsworth or the suggestive gym of LAVC), but it worked quite well. Tim Christianson/FB did the effective lighting design, and Steven “Nanook” Burkholder/FB handled the sound with his usual expertise. Christina Aguilar/FB was the theatre manager and stage manger, with Marie-Claire Erdynast/FB serving as the assistant stage manager (it was fun to watch her dancing to the music as she set and cleaned up for each act).

The 25th Annual Putnam County Spelling Bee continues through February 23 at REP East Playhouse. Tickets are available through the REP Online Box Office, and are usually available on Goldstar. Note that REP shows often sell out quickly, and that there will be a special “parent-teacher conference” performance (adult-only) on Thursday, February 7.  REP has announced their 2013 season, and it is a good one: Putnam County (Jan 25-Feb 23), Boeing, Boeing (Mar 15-Apr 13), To Kill a Mockingbird (May 10-Jun 15), 9 to 5–The Musical (Jul 12-Aug 17), God of Carnage (Sep 20-Oct 19), and Woody Allen’s “Play It Again Sam” (Nov 15-Dec 14). Subscriptions start at $110, and are well worth it — especially for the family you get as part of the deal, as the REP staff, cast, and crew are truly a wonderful family to be a part of. Click here to learn more about REP Season Tickets.

Dining Note: Dinner was at Spumoni‘s, where I had an Italian Sausage pasta dish. After all, what better way to celebrate Groundhog Day than be eating ground hog. (We go out on that joke) (No, we do reprise of song, that help) (But not much).

Upcoming Theatre and Concerts:   Our next theatre is at the REP again, when we have a scheduled parent-student conference for the adult-only version of The 25th Annual Putnam County Spelling Bee on February 7. Next weekend, on February 9, is “Backbeat” at the Ahmanson. February 16 brings “You’re a Good Man, Charlie Brown” at Cabrillo Music Theatre, and the last weekend of February is “The Snake Can” at the Odyssey Theatre (based on an ad that caught Karen’s eye in the latest Footlights). Karen (but not me) will be seeing “When You’re In Love The Whole World is Jewish” at the Greenway Court Theatre on Feburary 21. March starts with “I’ll Be Back Before Midnight” at the Colony. After a break for Fogcon (although I may do something here), theatre picks up with “Catch Me If You Can” at Broadway LA/Pantages on March 16 and “Boeing Boeing” at REP East on March 23. March may also bring “End of the Rainbow” at the Ahmanson, most likely on March 30. April will bring the Southern California Renaissance Faire , “Grease” at Cabrillo Music Theatre, and a winetasting at Temple Ahavat Shalom. May is also busy, with two concerts — Elton John in Las Vegas on May 4, and (tentative) Michael Feinstein at VPAC on May 11. May may also bring “Falling for Make Believe” at The Colony Theatre, “To Kill a Mockingbird” at REP East. Lastly, continuing the look ahead, June will bring (tenative) “The Scottsboro Boys” at the Ahmanson Theatre, “Priscilla – Queen of the Desert” at the Pantages, (tentative) Sweet Charity“ at DOMA, and the Western Corps Connection at the end of the month. I’m also keeping my eyes open as the various theatres start making their 2013 season announcements. Lastly, what few dates we do have open may be filled by productions I see on Goldstar, LA Stage Tix, Plays411, or discussed in the various LA Stage Blogs I read (I particularly recommend Musicals in LA and LA Stage Times).