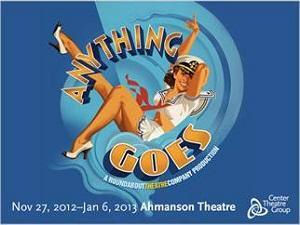 Timing is everything. No where is this seen better than in the musical “Anything Goes“. We saw the touring production last night at the Ahmanson Theatre. It was a spectacular production, both reflecting its times of origins, as well as making just a few comments on how nothing ever changes.

“Anything Goes” was originally conceived as one of those silly 1930s musicals (this was the era before there were truly integrated stories and music). The producer selected the writing team (P.G. Wodehouse and Guy Bolton), the composer (Cole Porter), and the lead actress (Ethel Merman). The story, which was to take place on a ship, involved a bomb threat, a shipwreck, and hijinks on a desert island. However, just as the show was about to go on, a fire on the SS Morrow Castle sunk the ship, killing 137 passengers and crew. The producers found themselves in the same position as a movie producer with a script about the twin towers on 9/12/2001. They couldn’t put on the show as written! They turned to writers Howard Lindsay and Russel Crouse to rework the story. A reworked story was crafted about an evangelist, gangsters hiding abort a ship, and a number of romantic entaglements. The show ran for 420 performances, was the 4th longest running musical of the 1930s, and introduced a number of standards such as “I Get a Kick Out of You”, “You’re the Top”, and “Anything Goes”.  But there were fewer songs than is common today, and more comic dialogue crafted for specific actors.

In 1962, there was an off-Broadway revival that starred Hal Linden and Eileen Rodgers. This was my introduction to the show, and to this day I love Hal Linden’s singing on the cast album. This reworked and reorganized the story, and brought in a number of Cole Porter songs from other shows, such as “Friendship”, “It’s De-lovely”, “Take Me Back To New York”, “Let’s Misbehave” and others. It also reorganized the story and songs. Wikipedia summarizes the differences. This is one of two licensed versions currently available.

In 1987, there was another Broadway revival, this time starring Patti LuPone and Howard McGillin. This version featured a reworked book by Timothy Crouse and John Weidman. It dropped a number of songs added in 1962… and added a few others from other Porter shows. It also made the story closer to the 1934 original, including restoring some 1934 songs that were cut in 1962. I saw this version in 2000 at Cabrillo Music Theatre; in fact, it was the first show we saw as Cabrillo subscribers. This version starred Katherine Lench and Robert Townsend, and got pretty good reviews. In 2011, this version was revived by the Roundabout Theatre company, with some slight changes in songs and reworked dances by Kathleen Marshall, the new director-choreographer. This is the version that is currently on tour.

In many ways, the book of “Anything Goes” is a silly one. A stockbroker (Elisha Whitney) goes on a cruise. His assistant (Billy Crocker) stows away instead of selling his stocks, in order to win back a girl (Hope Harcourt), a former debutant. A singing evangelist on the ship, Reno Sweeney, is in love with Billy, but Billy cares only for Hope. Hope, however, is engaged to Lord Evelyn Oakleigh, because she needs the money. Also on the ship is Moonface Martin (Public Enemy #13) and Erma, the moll of Snake-Eyes Johnson (Public Enemy #1). Johnson doesn’t show, and so Martin gives Billy his passport. This eventually results in Billy being thought of as Public Enemy #1 — meaning the ship now has a celebrity to fawn over. As the story goes on, there are loads of mistaken identities, costumes, and love affairs not only between Billy and Hope, but between Reno and Lord Evelyn, Elisha and Hope’s mother, Evangeline Harcourt, and Erma and every sailor on the ship. As you can see, a silly plot, with songs that (per 1934) are more entertaining than story-advancing.

However… there is some resonance to today, in how we so intensely crave celebrities to worship that we’ll even fawn over minor celebrities or notorious criminals. Don’t we see this in all the publicity given Lindsay Lohan or the Newtown shooter? The show also presents people trying to present images of wealth in the face of personal financial loss — again, something we see today. Perhaps this is why the revival is successful.

Of course, another reason for the success of the revival could be the performances. In New York, there was Sutton Foster, but on tour, we get the remarkable Rachel York.  York is a home-town girl — she studied in Los Angeles, and her parents and sister live here. She’s also a great singer, dancer, and actor — all of which are demonstrated in her performance as Reno Sweeney. Her tap dance number at the end of Act I is pure gold, and whenever she is belting a song — oh, wow. I had heard her on a number of albums, but truly grew to love her voice from her “Gentleman Prefer Blondes” performance. She was well worth seeing. A side note: I also enjoyed her acting and reactions during “You’re the Top” and “Friendship” — it demonstrated she had reached the point where she could play and have fun with the role, and this is a delight to see.

Paired with her, as Billy Crocker, was Erich Bergen. Erich had a very nice voice and gave a good performance, but my brain is still colored by the 1962 album and the wonderful voice of Hal Linden. Still, I enjoyed Bergen’s performance. He was playful and did a lovely job during the more melodic dance sequences.

In the third lead position was Fred Applegate as Moon Face Martin. Martin’s role was primarily comic, but he did very good in his solo numbers… and great in his comedy performances.

The supporting characters were also strong. Particularly notable were Alex Finke as Hope Harcourt, Edward Staudenmayer as Lord Evelyn Oakleigh, and Joyce Chittick as Erma. Finke’s singing and dancing as Hope were superb (especially in the “It’s De-lovely number), Staudenmayer had a voice that was just delightful (as demonstrated in the “Gypsy” number… and I would love to see him sing the Billy Crocker parts), and Chittick was outstanding in her “Buddie, Beware” number. Rounding out the supporting characters were Dennis Kelly as Elisha Whitney and Sandra Shipley as Mrs. Evangeline Harcourt.

In smaller character roles were Vincent Rodriguez III as Luke, and Marcus Shane as John. These are perhaps the two problematic characters in the story: stereotypical Chinese accolytes to Christianity brought on board by a priest who is arrested in the first scene. Luckily, Rodriguez and Shane didn’t play the roles too stereotypically, and had fun with them. Also in small character roles were Reno’s Angels — Jacqueline Burtney (Purity), Audrey Cardwell (Chastity), Dionna Thomas Littleton (Charity), and Vanessa Sonon (Virtue). Of these four, I was most entraced by Littleton, who just grabbed your eye whenever she was performing. However, all four were clearly having fun with these roles, although at times their dance moves were a little forced. Rounding out the smaller characters were Chuck Wagner as the Captain, and Jeff Brooks as the Ship’s Purser, Gopher. OK, I made up the name of the purser. The ensemble consisted of Jeremy Benton, Jan Leigh Herndon, Kristie Kerwin, Gary Lindemann, Michael Milton, Ashley Peacock, Bobby Pestka, Ryan Steer, Kristopher Thompson-Bolden, Aaron Umsted, Mackenzie Warren, and Sean Watkins. Swings were Audrey Cardwell (who subbed for Courtney Rottenberger at our performance), Alexandra Matteo, Sean McKnight, and Tony Neidenbach.
[All actors are members of Actors Equity.]

Turning to the dance and music aspects. As noted before, Kathleen Marshall was both director and choreographer. She was assisted by Jennifer Savelli, with dance arrangements by David Chase. I found the dancing in the show to be very strong, especially the tap dancing, although at points some of the movements seemed a little forced. Music supervision was by James Lowe, with Jay Alger serving as musical director and conductor. I particularly enjoyed Alger’s captain’s cap, and his joy conducting the 16 member orchestra, especially during the Entr’ acte. Additional orchestrations were by Bill Elliott (they don’t say what they are additional to, but presumably to the original 1987 orchestrations of Michael Gibson).  Seymour Red Press was music coordinator. Vocal arrangements were by Rob Fisher.

Lastly, we have the technical side of the story. The original scenic design was by Derek McLane, with properties coordinated by Kathy Fabian/Propstar. This was primarily a large ship set that worked very well, with a few smaller sets that slid on and off. The props were particularly noteworthy, in particular the dogs. The lighting design by Howell Binkley was very clever, especially the use of the blue spotlight during “Be Like The Bluebird” and the water effects. The costumes (designed by the late Martin Pakledinaz), the wigs and hair (Paul Huntley), and make-up (Angelina Avallone) did a delightful job of establishing the place and time. These were particularly noteworthy during the “Anything Goes” and “Blow Gabriel Blow” dance sequences. Sound design was by Brian Ronan and Keith Gaggiano and was clear and crisp. John M. Atherlay was the production stage manager, Sarah A. Tschirpke was the stage manager, and Genevieve Kersh was the assistant stage manager.

“Anything Goes” closes its run in Los Angeles with today’s 1:00 pm and 6:30 pm performances. Tickets should be available through the Ahmanson Box Office. The production next moves to the Golden Gate Theatre in San Francisco, where it runs from 1/8/2013 to 2/3/2013. Tickets for that run are available from the Golden Gate box office, and may be available on Goldstar.

Dining Notes: We dropped in at Heywood Grilled Cheese in Silver Lake for dinner, based on a great Yelp review. Yummy, yummy, yummy, and we’ll be back again. They do have gluten-free bread. However, I wouldn’t order their Tomato Bisque soup again, as it has bell peppers, and I’m sensitive to bell peppers.

Upcoming Theatre and Concerts:  Ah, a new theatre year has started. Next week (after the MoTAS Shabbat) we’ll be at the NoHo Arts Center for One November Yankee, starring Harry Hamlin and Loretta Swit.  It has gotten great reviews, and will soon be made into a film. The weekend of January 19 is open, although if we could afford to we would go to the Bill Quinn Roast at REP (alas, tickets are $100/person). January 26 take us to Orange County for Triassic Parq–The Musical at the Chance Theatre (Goldstar). February will start with the first play of the REP season, “Putnam County Spelling Bee“.  February 9 might be “Backbeat” at the Ahmanson, but I’m unsure about the show, and Karen is getting theatre-ed out (is that possible?). February 16 brings “You’re a Good Man, Charlie Brown” at Cabrillo Music Theatre, and the last weekend of February is currently open. March starts with “I’ll Be Back Before Midnight” at the Colony. After a break for Fogcon (although I may do something here), theatre picks up with “Catch Me If You Can” at Broadway LA/Pantages on March 16 and “Boeing Boeing” at REP East on March 23. March may also bring “End of the Rainbow” at the Ahmanson, most likely on March 30. April will bring the Southern California Renaissance Faire (huzzah for the $15 Holidazzle sale), “Grease” at Cabrillo Music Theatre, and “To Kill a Mockingbird” at REP East. I’m also keeping my eyes open as the various theatres start making their 2013 season announcements. Lastly, what few dates we do have open may be filled by productions I see on Goldstar, LA Stage Tix, Plays411, or discussed in the various LA Stage Blogs I read (I particularly recommend Musicals in LA and LA Stage Times).