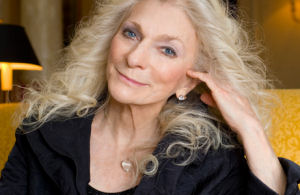 Last night, we went to the Valley Performing Arts Center to see a folk legend perform. No, I’m not talking about Tom Paxton.  I’m talking about Judy Collins, who at age 73 is still performing across the country, still singing folk songs and standards, and still telling stories of the folk scene of the 1960s.

A lot of people don’t think of Judy Collins as a folk artist. I can understand that well — my first introduction to her music was not through folk music. A girl I dated (all I can recall is she lived in Los Feliz) gave me the album Judith. This albums was mostly covers of songs, including “Send In The Clouds”. Since then I’ve been introduce to Judy’s earlier folk work, and have learned about her participation in the folk scene of the 1960s.

The show setup was simple, a piano (occasionally with her accompanist and music director, Russell Walden; occasionally played by Judy) and a guitar. In between songs, Judy gave a retrospective of her life (although happened less in the second half, leaving us pretty much stuck in the late 1960s as far as her stories). A lot of her stories were about her father and her influence on her life. The music was varied: folk combined with many standards, and including songs from some of the greatest writers of the 20th century: Bob Dylan, Leonard Cohen, and Jacques Brel.

The songs were as follows (I’m not including all song snippets):

The second half felt a lot shorter than the first, and I heard comments as we were leaving that Judy didn’t sing some of their favorites (in particular, “Both Sides Now”). That didn’t bother me; the artist makes their artistic choices. For someone with a catalog as deep as Judy Collins, it is understood she won’t sing the favorites every time.

Her performance was strong. I could hear the age creeping into her voice — it didn’t have quite the purity of the early days, and she couldn’t hold the notes quite as long. But that’s to be expected — voices age along with bodies. She also didn’t have as much stage presence as Raul Esparza or Bernadette Peters (but that’s to be expected). Comparing her to some other folk artists I have seen at McCabes (Paxton, Stookey) she was good. She was better in the first act with the story of her life; there was less of this in the shorter second act. I particularly enjoyed those stories, especially the mention of her friendship with Mary Travers. I just wish she had continued with the story, bringing us through the 1970s to the present day.

I was a little surprised that she had limited “merch”: one live performance DVD (“Judy Collins: Live at the Metropolitan Museum of Art“), and copies of her recent book (“Suite: Judy Blue Eyes“). I was particularly suprised she didn’t have her latest CD (“Bohemian“) out.

Upcoming VPAC Performances: Currently, we have no more performances ticketed at VPAC this season. Looking at what is left of the season, we may get tickets to Michael Feinstein in May.

Upcoming Theatre and Concerts:  Tonight bring an intriguing mash-up: “A Mulholland Christmas Carol“  at Theatre of Note on December 22 (this is a combination of A Christmas Carol with the story of the St. Francis Dam disaster). December ends with Other Desert Cities at the Taper on December 29. (I”ll also not we’ll likely see the Les Miz movie on Christmas, followed (of course) by Chinese food).

Turning to 2013… January starts with “Anything Goes” at the Ahmanson on January 6. January 12 is currently held for the MoTAS Shabbat, although I may book something in the evening. January 19 is currently open, as Erin returns to Berkeley the next day; supposedly, there may be an event at REP of interest that evening. January 26 is being held for the just announced production of Triassic Parq–The Musical at the Chance Theatre in Orange County. February will start with the first play of the REP season, “Putnam County Spelling Bee“.  February 9 is being held for “Backbeat” at the Ahmanson. February 16 brings “You’re a Good Man, Charlie Brown” at Cabrillo Music Theatre, and the last weekend of February is currently open. March starts with “I’ll Be Back Before Midnight” at the Colony. After a break for Fogcon (although I may do something here), theatre picks up with “Catch Me If You Can” at Broadway LA/Pantages on March 16 and “Boeing Boeing” at REP East on March 23. March may also bring “End of the Rainbow” at the Ahmanson, most likely on March 30. April will bring the Southern California Renaissance Faire (huzzah for the $15 Holidazzle sale), “Grease” at Cabrillo Music Theatre, and “To Kill a Mockingbird” at REP East. I’m also keeping my eyes open as the various theatres start making their 2013 season announcements. Lastly, what few dates we do have open may be filled by productions I see on Goldstar, LA Stage Tix, Plays411, or discussed in the various LA Stage Blogs I read (I particularly recommend Musicals in LA and LA Stage Times).