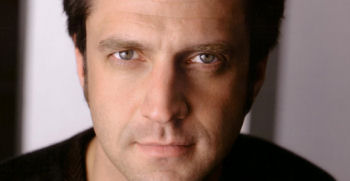 Yesterday was my daughter’s 18th birthday. It was also the day that Raul Esparza was going to do a concert at the Valley Performing Arts Center. Erin loves Raul Esparza, and really wanted to go; alas, she is now up in Berkeley and was unable to get down. She got her nose pierced instead (which looks nice, but we do have the traditional parental stance). In Erin’s absence, we went to the concert. This write up is partially for her*.
[*: In particular, she specifically asked that I not say that the show was great or gush over it before the “more” tag.]

The singular focus of Raul’s show was Sondheim. Much as I love Sondheim, he gets tiresome as a concert subject. I understand why singers choose him: His songs are musically complex, a challenge to sing, and provide the ability to showcase one’s talents. If one has worked with Sondheim — a theatre legend — one can share those stories and entertain the audience. But having just listened to a concert devoted to Sheldon Harnick, and being a fan of all musical theatre, I’d truly like to see a concert devoted to other composing teams. We occasionally see these for Rodgers and Hammerstein (although less often these days); what I’d really love, though, is shows devoted to the lesser-known and more challenging material of Kander and Ebb, or the wonderful Jazz compositions of Cy Coleman (who was really the most jazzy of the composers out there). But we are lucky, at least, with Raul’s choice of Sondheim. He didn’t fall into the trite Sondheim category, doing well known songs such as “Send in the Clowns” or anything from Gypsy. Alas, he also didn’t do some of the great songs from lesser shows, such as Saturday Night, Frogs, or Pacific Overtures. More on this later.

Raul’s show also lacked Merch. One goes to a show hoping to be able to pick up something to bring the memory home. A solo CD. CDs of recent shows (I know Leap of Faith has been recorded, but I don’t recall if the CD is released yet). At VPAC? Nothing. Perhaps this show is preparation for a future Sondheim solo CD.

As for Raul’s performance itself. It was very good, although I’m not as much of a fanatic as my daughter is. I’m certainly not as much of a fanatic as the person sitting next to me was, who loved to scream and clap over enthusiastically.  I thought the show quite pleasant, although my wife noted that Raul didn’t put a lot of vocal power in most of the songs. His chatter portions were mostly stories about his growing up and Sondheim’s influence thereupon, and upon his interactions with Sondheim on Broadway. A number of these stories were similar to what is found in the album Sondheim on Sondheim, especially the sequence on the endings of Company. There was very little else, and you didn’t learn much about the man.

More on these subjects, plus the usual upcoming show list, after the cut…

Ah, now I can say the good stuff.

Raul’s performance was mostly good, although my wife did say that he seemed to be holding back on the power. He was nursing water bottles during the show, so perhaps he was dealing with a vocal injury — or preventing one.  Raul has a voice similar to Mandy Patinkin, although he can’t quite hit the same highs. He’s done great with both rock songs (I particularly like his work in tick.. tick.. Boom! and Leap of Faith) and ballads, but this didn’t come fully across in his choice of songs. Some song performances were great, such as his performance of “Franklin Shepard Inc.” in Act I, “No More” and “Being Alive” in Act II, and the very touching “Goodbye for Now” (from Reds) which closed the show.

The song list, best as I could figure out (I don’t know the names of all Sondheim songs) was as follows:

Looking at this list, I’m surprised to see so many songs from Evening Primrose, a little-known Sondheim effort done for TV in 1966. As I noted before the cut, there wasn’t great coverage of all Sondheim shows, but at least the overdone stuff wasn’t overdone. The show was enjoyable, although I wish a bit more of Raul’s personality had shown through.

One thing that was very enjoyable was Raul’s interplay with Mary Mitchell Campbell, his pianist and the music director of a number of Sondheim shows. Their interplay brought out the stories in a very interesting fashion.

Upcoming Theatre and Concerts:  November will close with “Moonlight and Magnolias” at REP East. December sees us at the Colony for “The Morini Strand” on 12/15 . December will also likely bring “Anything Goes” at the Ahmanson. There are a few other shows I’m thinking about if they work out, such as Other Desert Cities at the Taper (through January 6), but we lose much of the month to ACSAC. We may see something in Orlando during ACSAC. December will also bring another concert: “Judy Collins” at VPAC. Starting the look into 2013. Currently nothing is scheduled for January, but that’s sure to change as REP announces its dates for the 2013 season. I’m also looking into the just announced production of Triassic Parq–The Musical at the Chance Theatre in Orange County.  It is there just after my birthday, so it sounds like a great 53rd party. February brings “You’re a Good Man, Charlie Brown” at Cabrillo Music Theatre and “I’ll Be Back Before Midnight” at the Colony. It may also bring “Backbeat” at the Ahmanson. March will likely bring “Catch Me If You Can” at Broadway LA/Pantages. I’m also keeping my eyes open as the various theatres start making their 2013 season announcements. Lastly, what few dates we do have open may be filled by productions I see on Goldstar, LA Stage Tix, Plays411, or discussed in the various LA Stage Blogs I read (I particularly recommend Musicals in LA and LA Stage Times).