This weekend is Carmageddon II, and this has prompted the papers to publish a number of interesting historical articles on Los Angeles Freeways. In two of them, I ended up staring at pictures for a few minutes to figure things out, so I thought I would share the process. For both, it took a long time to figure out the exact placement and direction of the pictures.

The first image was from an article on the San Diego Freeway in the Sepulveda Pass. This image showed the Mullholland Bridge under construction… but Sepulveda Blvd is on what will eventually be the I-405 roadbed, and there is an underpass under that roadbed. What gives? 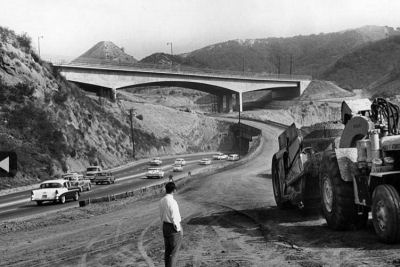 Looking at the next picture helps to answer the question: 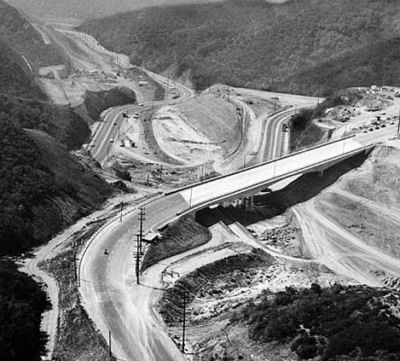 This picture is looking southbound (as evidence by the curve in Mullholland on the left hand side of the picture), meaning that the right hand side is Mulholland above the tunnel. This means the curving road at the top of the right hand side is Sepulveda, which made a hairpin turn out of the tunnel, crossed what would be the 405 (and going through the temporary underpass shown in the first picture), making another curve and running on the EAST side of what would be the 405 where it would then cross back to the WEST side. Today, Sepulveda stays straight on the WEST side all the way down to where it crosses the freeway just N of the Getty Center.

The second picture of interest was from a post KCET did on the history of the I-10 construction between I-405 and the Harbor Freeway. This picture showed the 405/10 interchange under construction in 1963 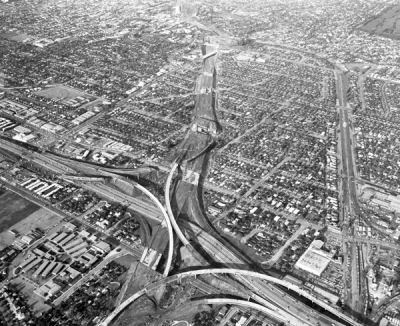 This one took a while to figure out. There were a number of clues. First, remember that the 405 predates the 10 in this area (this is shown by this image on my website). Secondly, look at the cluster of buildings in the lower left hand corner of the picture. Here is a map of those buildings today; it is Daniel Webster Middle School. This means the road going from the middle of left side of the picture to the top is National, and the diagonal coming off of it is Corinth.  That also means the road paralleling the right hand side of the picture, with a curve at top, are the Exposition railroad tracks, and the curve is over by Northvale and the square at the upper right corner is Cheviot Hills park. This means the view of the picture is to the E, with the S to the right… meaning the picture was printed reversed. Here’s the correct orientation (N at top), and the view today: 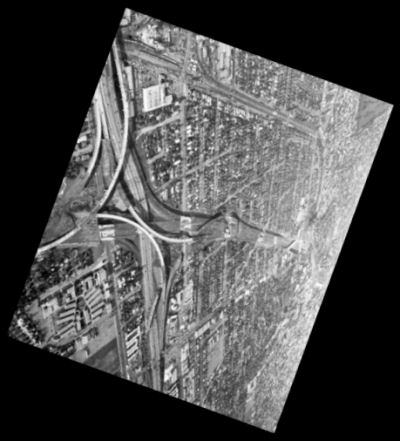 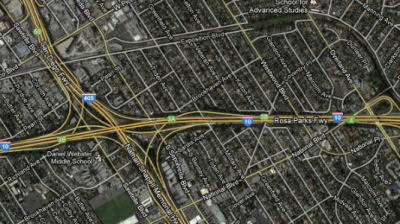 Well, in any case, I found it interesting.