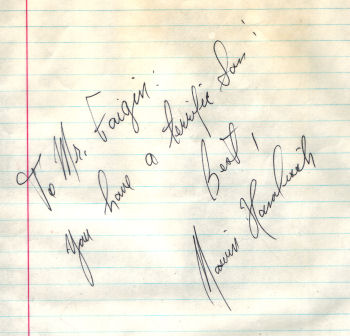 Today’s news brings word of the passing of Marvin Hamslich (Playbill, LA Times, USA Today), and that means it is time to trot out my story of my encounter with Mr. Hamslich.

It is 1975; I’m 15 years old and in the high school program at Wilshire Blvd Temple. This program, which was run by Rabbi Goldmark, brought in various name speakers to talk about Judaism in their lives and what they do. This includes folks like Monty Hall, political figures, and Marvin Hamlisch. As WBT was near downtown, and I was living in Brentwood (16 miles away), Wilshire ran a bus from near University Synagogue to the downtown campus. This bus left promptly at its scheduled time; if I missed it, I had no way to get home.

One particular Sunday in 1975, our speaker was Marvin Hamlisch. He’s running long, so I get up to go get the bus. He stops speaking, looks at me, and asks where I was going. I told him I was going to catch the bus to go home. He says that he doesn’t like to lose an audience, and he would give me a ride home. This he does, but along the way, we stop at the newsstand in Westwood so that he could pick up the New York papers and read the reviews of A Chorus Line, which had just opened. I did get his autograph on a piece of notebook paper, which I have to this day.

Thank you, Mr. Hamlisch for your music throughout the years. From A Chorus Line to They’re Playing Our Song to Smile to Goodbye Girl to Sweet Smell of Success to numerous others, you have added art and richness to our culture. Thank you for your movie music throughout the years, starting with The Sting and the music of Scott Joplin. I’ll even forgive you for The Way We Were :-). Oh, and thank you for the ride home. I look forward to seeing The Nutty Professor if it ever makes it out to Los Angeles.

P.S.: Reading the reactions, nobody has a bad word for the man (here, here, here). That says something about him.