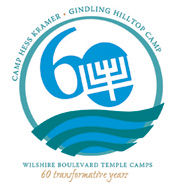 Today, I went to a very special birthday party: a 60th birthday party for the Wilshire Blvd Temple Camps. This was a day where campers from the first year of camp (back in 1952) were invited back to Malibu to celebrate 60 years of Jewish camping on the coast. I had a blast; the day wasn’t long enough to do all I wanted to do and to take the time to see everyone I could have seen.

So let’s recap a bit what this was about, why this was special, what today was, what I saw, and what the future holds.

I’ve written about camp before, so as you might guess, this is an important place to me. The Wilshire Blvd Temple Camps — Camp Hess Kramer and Gindling Hilltop Camp — were started in 1952 and moved to Malibu in 1954 (if memory serves correct). They serve Jewish youth from about 4th grade to high school, with opportunities for older high school and college folks through staff positions. Over the years, they have touched thousands and thousands of young people, instilling in them a sense of connection to the Jewish community, and for many, a need to do service for the community at large through leadership positions, teaching, or just being good people who do good.

I attended the camps starting in 1969 and continued through 1979. I was both a camper and a counselor, but never in a “leadership” session (in my day, those were only at CHK), nor did I do a year as a CIT (counselor in training). I made a number of friends over those years — perhaps not folks I see regularly, but folks that when I do see them there is an instant bond, a hug, and a friendship where we know we would be there for each other. This is what camp does when you get to know people.

I got to see a number of folks like that today — folks who were fellow campers with me, folks that were my counselors, folks that were camp leaders. When I saw these folks, the years melted away. I didn’t seem them as “old” — I saw them as my counselors and friends, and teens and young adults they were in my memory. Last week I wrote about “Follies”, and how there were younger dancers echoing the people on stage. I think that’s how camp was: we didn’t see ourselves as the adults of today at camp; when we visit camp we are eternally young. This is one reason why this place is so special. 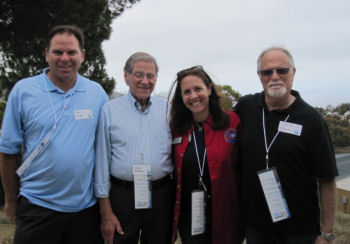 So you have memories combined with great people. For example, the picture at the right shows three generations of camp directors of Gindling Hilltop: from the far right to left: Steve Makoff, Andrea Cohen (the current director), and Chuck Feldman. I was at Hilltop during the years with both Steve and Chuck (and I see Andrea every Alumni Shabbat), and I don’t think I’ve seen either of them for years. It was great to reconnect with them — I got to see and talk to people that I haven’t seen in real life in ages (although, for some, I talk to them regularly on Facebook). This is just one thing that made today special.

I didn’t get to spend that much time at Hess Kramer, alas. Shortly after I got there, I had lunch and took the bus up to Hilltop, where I spent most of the midday. I did get to check on my step. which I last reported on in 2009. As background, I was running the arts and crafts group that painted the back of this step in 1979. I’m pleased to say that when I checked today,

my name was still (barely) visible. I”m not sure it will last another year.

But things don’t last. One of the displays they had up in Baruh Hall was some planning sketches for future camp buildout. I’m not 100% sure I like the approach, but change is uncomfortable. The changes proposed were along the lines of the changes that were discussed four years ago in 2008:

Will these changes occur? Who knows? It is a long-term master plan, and by the time funding gets in place notions may change, or they may determine something better works. What it shows, however, is a commitment to the future, and not keeping the camps static. Keeping any facility static and dated drops participation. So whether I (as an Alumni) like it or not doesn’t matter: what matters is whether future campers and conferences facility users will like it — and I think they will. That’s what is important: keeping the pieces of the past that work, paying tribute to what built the foundation, and then moving forward to make the future successful. The planning shows that this is a goal.

It was just a wonderful relaxing day, surrounded by generally good people. Now to go “friend” some of the folks I hadn’t seen in years…