Last night was the first night of Passover. It was a busy day.. I’m still exhausted. Still, I promised you pictures of the table, so I need to do that.

Why was I so tired? Well, we had 20 people over for dinner (including us). Yes, people were bringing dishes, but we were still cooking a lot: a kugel, salmon, vegetables, sweet potatos, gefilte fish. I also had to set the table, which meant bringing out the good china. We’re of the belief that the “good stuff” shouldn’t just sit in a cabinet–you should use it occassionally. Chinaware wants to be used. So the table was set with the finest: three different sets of china: our patter, my mother’s pattern, and my grandmother’s pattern (we didn’t have enough of just one–we only have a set of 8 for our pattern). Oh, you want pictures. Well, here you go: 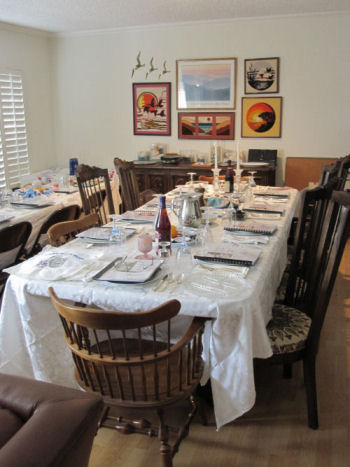 Of course, there was a complicating factor. There’s always a complicating factor. In this case, the factor was that my wife, two days ago, walked into a plate glass window at Disneyland. Yesterday morning, she was feeling dizzy and unsettled… so around 10am, she had a friend take her to the ER at Valley Presbyterian (on the advice of our family doctor). So all that cooking above… she left written instructions. Now, I’m the table-setter, the leader of the ceremony, and the dish washer (I was up to 1am washing dishes afterwards). So guess who picked up the gauntlet to do the cooking? Nope, not me, although I helped. The credit goes entirely to my daughter Erin, our dear friend Nicole, and my uncle Ron. Erin did a lot: the night before, she backed two pecan pies, two apple pies, and an apple cobbler.

Adding to the stress of the day: college selection stuff. As I’ve written before, Erin is deciding between George Washington University in DC, UC Berkeley, and Bard. We had been working with a group that had indicated they could help us get financial aid. We were melting down yesterday because that didn’t pan out. That subject will be the topic of my next post, but suffice it to say that the only aid we’ve seen has been some merit-based aid that Erin got; nothing came from the financial work the college planning group did. Stressing over that just added to things.

Last night was also the first night using our updated haggadah. I think I worked pretty well. We still have never done the after-dinner portion of the service, but other than that… people liked all the explanations I have in our haggadah, as well as how it tells the story. As before, if you want a copy of the haggadah, all you need to do is drop me an email. 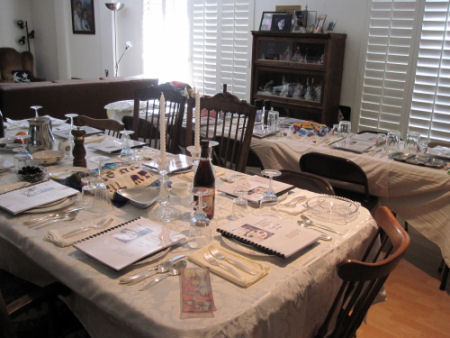 One of the nice things about last night is that this is one of the first time we’ve had the full family at the house (or a close facsimile thereof — my wife’s brother couldn’t make it, and her other sister is in Tucson). We had my sister-in-law and her family; my uncle Ron, his daughter, and her three children; my uncle Tom and his wife; three of Tom’s friends, and two of Erin’s friends. A full house!

Did Karen ever make it? Yup, she got home around 10pm, after having a temper tantrum at the ER for just letting her sit, with a potential head injury, for 5 hours. She will be letting her doctor know. What was the verdict? Just a minor concussion, and it will get better over the next few days.

So that was our 2012 Seder. I was up for 3 hours cleaning, and today I’ve got loads and loads of stuff to put away. Tomorrow may be the Ren Faire if we’re up to it. I’m not sure how Faire is on Easter Sunday, thought. We might go next weekend.