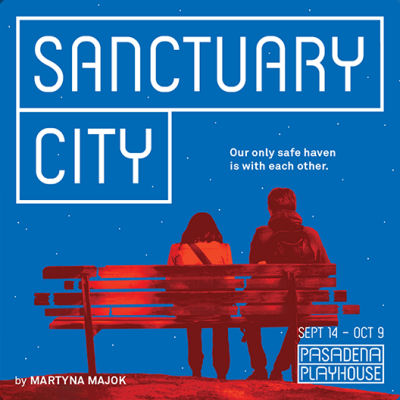 What does the word “sanctuary” mean to you?

Perhaps you come at the word from the religious sense: it is a place with holy relics where you worship. If so, you might think the play Sanctuary City, which we saw last night at the Pasadena Playhouse, is about a city filled with churches, mosques, and synagogues. You would be wrong.

Another meaning of the term refers to a safe space — a space were you are protected and safe from those who might do you harm. Recall from The Hunchback of Notre Dame that Quasimodo seeks sanctuary in the Sanctuary, as a church is viewed as hallowed ground where the clergy will protect you. We often see religious institutions treated in this manner: those who reside there are protected by a higher power.

More recently — and especially during the Trump administration — the notion of a “Sanctuary City” arose. This was a city where undocumented immigrants were safe. If the police encountered them, they wouldn’t be asked immigration status or reported to ICE. They were safe — for varying values of safe.

Sanctuary City, by Martyna Majok, directed by Zi Alikhan, explores the notion of sanctuary in many ways (although never in the way the title of the play might lead you to believe). This is a one act play that has two distinct acts (and, in some ways, it really could use that intermission). I should also note that this takes place in 2006, after 9/11, and long before DACA or the other changes that came about during the Obama administration.

During the first half — which takes place in an abstract metal structure that could be the bones of a house, we meet a boy (B) and a girl (G). These two have been friends since they were toddlers, ever since their families brought them across the border in various fashions for a better life in America. G’s mother is now with an abusive guy, and so G finds sanctuary with B — constantly coming over and crashing with him.  B’s mother plans to return to Mexico before they catch her, and B can come along or not. She’s fine leaving him in American — and he wants to stay because that’s where his life is. The first act is told in a distinctly non-linear fashion, with flashes between timelines that fill in the details of the story. We do learn, by the end of the first half, that G’s mother has been secretly studying to be naturalized, and has gotten her naturalization papers — and before G turned 18, meaning G was a citizen as well. G comes up with a plan to save B by marrying him, and they prepare for the eventual ICE questioning. G also gets accepted to a university in Boston.

The second half is three years later, and abandons that abstract house for a realistic apartment. Three years in, B and G’s plans are on the rocks, called off by … well, let’s just say there is a reason that B never truly “slept with” G during those earlier years. There is now a love triangle, wherein we meet B’s lover, Henry (a pre-law American). It is within the tensions created by this triangle that the other aspects of sanctuary — safety — come into play. G has come to realize that if she marries B, she isn’t safe if they are ever found out, but there is Henry in the equation. B has to decide between the safety with respect to ICE, vs safety with respect to love. And Henry — who can’t marry B at this time because of the law — is stuck in the middle. How this all resolves is the focus of the second half.

This is a story that drew me in. Initially, it was the question of who these people were, and what was their story. The non-linear flash device used is a novel story telling approach, and you quickly saw the strong friendship and figured out the backstory. You wanted them to become more, yet they never quite did. The second half was fascinating, raising all sort of ethical and legal questions. Some of the situations portrayed in this play are no longer a concern (but then again, may be a concern again, given the current Supreme Court). Some, such as the question about undocumented immigrants and what to do about children who were raised as American (but who aren’t Americans), still remain. It was a really interesting, entertaining, and still relevant play. It makes you think, as you leave the theatre, what makes you truly feel safe — and what are you willing to do and give up to get that safety?

The performances were strong. Ana Nicolle Chavez (G) was believable as the teen dealing with an abusive step parent, seeking sanctuary in the home of her friend. Miles Fower (B) was believable as her friend. The two had strong chemistry together, and you could see them capturing well the tension in the relationship. The third point in the triangle was Kanoa Goo (Henry). He was believable as someone who loved B, and there was a strong tension shown with G who was on the verge of taking B away from him.

Chika Shimizu (Scenic Designer) created an interesting scenic design. The first half was a very abstract metal structure, which combined with Solomon Weisbard (Lighting Designer)‘s lighting allowed the non-linear story telling to occur. The second half was a more conventional design of an interior of an apartment. John Nobori (Sound Design) established the mood and place through appropriate ambient sounds; the actors amplification was sufficient for my currently degraded ears. Jojo Siu (Costume Designer) rounded out the design team.

For right now, we’re pretty much sticking with shows that come as part of our subscriptions or are of interest through our memberships. Looking ahead for the remainder of 2022:, the rest of October will bring Ghosts at the Odyssey Theatre Ensemble, The Addams Family at 5 Star Theatricals (FB), and To Kill a Mockingbird at Broadway in Hollywood (FB). November brings 2:22 – A Ghost Story at the Ahmanson Theatre (FB). Lastly, December will bring Annie at Broadway in Hollywood (FB).