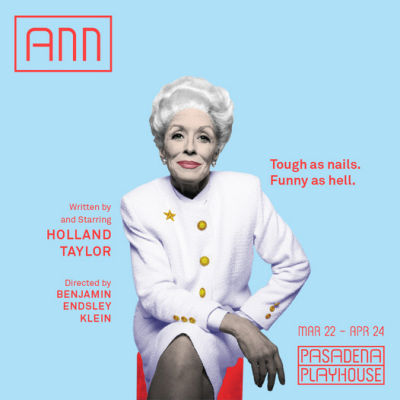 Back in February 2020, I was visiting my daughter in Madison WI. Tickets had just gone on sale for a show my wife really wanted to see, Ann, at the Pasadena Playhouse. Ann was a one-woman show that told the story of Ann Richards, Democratic Governor of Texas from 1991-1995.  Richards was a political firebrand known for speaking her mind, which was well demonstrated at the 1988 Democratic National Convention (where we first learned about her). It was Richards who came up with the line I’m sure you’ve heard: “After all, Ginger Rogers did everything that Fred Astaire did. She just did it backwards and in high heels.”

We had been planning to see the show in May 2020. But then COVID happened. The show was cancelled; we had a credit at the Playhouse that we rolled into their new membership program. The new season was announced. Guess what was on the season? Yup. Ann was back.

We ticketed it as soon as we could, and coordinated the handicapped seating for my wife.

The story of the show’s origins is best described by the LA Times. It is a play that Holland Taylor (who folks probably remember best as the mother in Two and a Half Men, but whom I remember from It’s a Living) was compelled to write. Taylor was a regular on “Two and a Half Men” when the desire to write “Ann” seized hold of her. She dropped to a visiting role, and started to write and research (starting in 2006). She did extensive research, and seemingly channeled Richards. The play started its life at a venue we knew well, the NoHo Arts Center (the executive producer is married to James Mellon, who ran NoHo ACE). It played in Texas in 2010, on Broadway in 2013, and was recorded for Great Performances. Taylor has indicated this is the last time she’ll be putting on the wig and playing the role.

(and, yes, I’m writing this review a week late. Last Sunday was really busy with preparations for a new podcast I’m starting, and I didn’t get to the review)

The presentation of the show is simple, and best divided into three parts (it runs just under two hours, plus an intermission). It opens with Richards giving a graduation speech at a Texas university I didn’t recognize, where she reminiscences about her life and her origins, include her life with her parents, her marriage, and her entry into politics. It then transitions to the Texas Governor’s office, where we get to see Richards at work playing the political game. The third part is after she’s left office, talking about her post-governor life.

The show was laugh-out-loud funny, which isn’t a surprise given Richards opinions and lack of a filter. It was also a reminder of how politics has changed — especially in places like Texas. Texas used to be a Democratic stronghold — remember they gave us LBJ — and even their Republicans were often moderates (when you look back at the Bushes, you can see that). I’ll note Richard’s didn’t have a high opinion of Bush — she’s the one that said “Poor George, he can’t help it. He was born with a silver foot in his mouth.” She also said of Republicans, “You have to be against government interference in business until your oil company, corporation or Savings and Loan is about to go broke and you beg for a government bailout.” So her attitudes are refreshing, and very far away from where Texas is today. Texas really needs someone who can speak the truth and be listened to; which is very far from the current leaders who toe the Trumpublican line.  Perhaps Beto will be that person.

Hopefully the few Conservatives in Southern California can go to this play and enjoy it. But it really works well given the progressive nature of the area. We really enjoyed it.

Supporting Taylor, but not seen, was Julie White as the voice of Nancy Kohler (Richards’ office professional)

Turning to the production side: The production was directed by Benjamin Endsley Klein, who directed the show on Broadway and kept the pace lively and the performances believable. The simple scenic design (a podium in front of a drape; the governor’s office) was by Michael Fagin (no relation), who also designed the Broadway production. The production team connections with this show continued with the sound and light: Ken Huncovsky Sound Design;  Sarah Ec Maines Lighting Design. Costume design was by Julie Weiss; and Hair and Wig design was by Paul Huntley. This was probably one of Huntley’s last productions; he passed away in July 2021. Both costumes and wigs were simple but critical: a light blue pantsuit, and Richards’ signature Beehive hairdo. Projections were by Zachary Borovay. Other production credits: Kevin Bailey Executive Producer; Bob Tolaro Stage Manager; Kevin Bailey Asst Stage Manager; TJ Norton Production Assistant. There was no credit for a COVID safety officer. Although it wasn’t in the Playbill, writing this up I discovered that Bailey was in a production at the Pasadena Playhouse we fondly remember, Heartbeats.