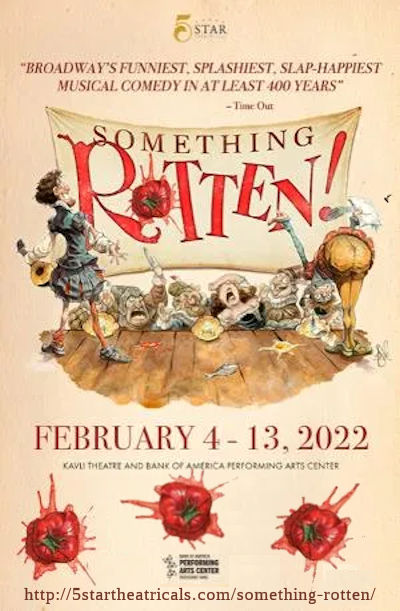 Recently, I received an announcement that tickets for the 2022 Renaissance Faire (Southern) are on sale. I’m looking forward to it (although I’m a bit nervous about how we’ll maneuver through the “dam site” in a wheelchair); both 2020 and 2021 were cancelled due to the plague. Hmm, the plaque. Sounds like a great topic for a musical, but perhaps more on that later.

Anyway, back to the Ren Faire. One doesn’t need to wait until April, nor drive to Irwindale, to go back to the time of the Renaissance. One need only hitch up your cart and get thee out to Thousand Oaks, where 5 Star Theatricals (FB) is mounting one of the first big regional production of Something Rotten, a musical from First time theatre writers Wayne Kirkpatrick Music, Lyrics; Karey Kirkpatrick (FB) Music, Lyrics, Book and John O’Farrell Book.  We last saw Something Rotten back in November 2017 when the National Tour hit the Ahmanson Theatre (FB), and the show remains just as charming and fun as when we saw it then. Here’s how I summarized the show back then (modified a bit):

The plot of Something Rotten revolves around Shakespeare. Specifically, it is the story of the Bottom Brothers, Nick and Nigel, who are competing playwrights to Shakespeare. He used to be part of their acting troupe, but was fired because he was a bad actor (and he was told to become a writer). Shakespeare’s star keeps rising, and the Bottom Brothers keep failing. In an attempt to find the next big thing, Nick Bottom consults a soothsayer who says it will be … Musicals. Nick is eventually convinced and starts writing, using his brother’s poetry as lyrics. But the subjects just don’t work out (a musical about the Black Death — I’ll never work), and so he visits the soothsayer again to learn what Shakespeare’s next big hit will be? The answer? Omlette, and perhaps something to do with Ham and Danish. Nick starts running and won’t be deterred, even when his brother falls in love with a Puritan’s daughter, and writes perhaps the best play he’s ever written. You can guess a bit as to what happens then: Shakespeare steals the good play and Omlette fails … and we deal with the aftermath. What? You didn’t want that spoiler? Well, Romeo and Julia both die as well.

Along the way, we meet some various other characters: Bea, Nick Bottom’s long suffering wife that just wants to help him succeed in any way she can; Portia, the aforementioned Puritan’s daughter who falls in love with Nigel’s words; Shylock, the Jewish financier who just wants to be a producer (answering the question of why you see so few Jewish folks at RenFaire); and the Puritans headed by Brother Jeremiah, who believe that theatre is a sin — especially those men dressed as women kissing men — and that music in theatre is just heresy and an abomination. Puritans really know how to screw up anything that’s fun. Give them an inch, and next thing you know, they’ll screw up the ideals of that new world we just discovered.

If you haven’t seen the show (and even if you have), this is a very funny show. It is packed with references and homages to other shows in the musical theatre canon (even if just a few bars or beats); this is seen in the number that sold me on the show from the Tony Awards: “Musical”. They even updated it since Broadway — I clearly saw references to Dear Evan Hansen in the show. I enjoy the music; I enjoy the references. It is really laugh out loud funny, even on subsequent viewings. It is the type of show that we need these days.

So why did I mention the Renaissance Faire at the start of this? Well, the time in which this musical is set is the same time as the Ren Faire, when Shakespeare was at the top of his popularity.

Unsurprisingly, going in I knew this was a show for which I liked both the book and the music. The question was: How would this fair at the regional production level? Would 5-Star do a good job of pulling it off? Luckily, that isn’t even a question. 5-Star (nee Cabrillo Music Theatre) has been producing excellent musicals since they started, and certainly since we started subscribing back around 2001. Under the direction of well-known local musical director (and 5-Star regular) Richard Israel the cast came together into a wonderful performance ensemble, augmented with the choreography of Michelle Elkin. In fact, reading through the program demonstrated both why Southern California is such a special place when it comes to theatre, and why 5-Star is such a special company. Most of the non-debut artists we have seen on stages all around Southern California (in fact, we saw the fellow who played Nick Bottom on this date back in 2016 when he was in Empire at La Mirada), and 5-Star has a long track record of introducing musical theatre talent (Katharine McPhee had one of her first roles doing the lead in Annie Get Your Gun for Cabrillo back in 2005). We can reliably expect 5-Star to do an excellent job; we’re looking forward to their productions of Newsies and The Addams Family later in 2022.

In the lead positions were Justin Michael Wilcox (FB) Nick Bottom and Frankie Zabilka (FB) Nigel Bottom. Both appeared to be having loads of fun with the roles, and this came across in their performances. Strong singing, strong comic timing — they were just fun to watch. Playing off of them was Aleks Pevec Shakespeare, who channeled his inner rock star to capture the ego that is Shakespeare in this show.

In the supporting positions were the guys behind the Bottoms, and the women behind the Bottoms. Let’s start with the guys: Randy Brenner (FB) Nostradamus; L. Michael Wells (FB) Shylock; and Jalon Matthews Brother Jeremiah. The standout here is Brenner: he put a lot of comedy and playfullness in the role, and he gets to put in the bulk of the musical theatre references. Wells also has fun with the role, and doesn’t make it too cringy (which, alas, any Shylock portrayal can be). Matthews basically gets to be the bad guy Puritan, but he handles the double entendres of the part quite well.

As for the women, as is natural in the time, they are relegated to wives and girlfriends: Brittany Anderson (FB) Bea Bottom and Bella Gil Portia. Anderson captures the earnestness and humor quite well, and does a great job on “Right Hand Man”. Gil is really playful and fun to watch as Portia, the love interest for Nigel. I especially enjoyed her in “We See the Light” and the Shakespeare party numbers.

Turning to the remaining production credits: Sets, Props, and Costumes provided by Musical Theatre West, and were originally designed by Paul Black Sets, Props, Costumes; Dylan Powell Props; and Robin McGee Costumes. Local designers were Will Brattain Costumes, Luis Ramirez Hair and Wig Design; and Alex Choate (FB) Props.  In general, these worked well (although I still miss the days when Cabrillo made their own sets and costumes, but I guess the economics of theatre these days, especially for a 2 week run, precludes that). There were one or two minor costume mishaps and set piece mishaps, but no big deal. The bigger technical support was provided by  Jonathan Burke (FB) Sound Design and Jared A. Sayeg Lighting Design. Both were good, although the sound was a bit more muddied in the handicapped seats at the back of the orchestra then our usual seats in the Mezzanine. Rounding out the production credits were: Jean Carlo Yunén Aróstegui Assistant Director; Talia Krispel Production Stage Manager; Jack Allaway (FB) Technical Director; Julia Pinhey Sound Engineer; Julian Olive Stage Manager; David Elzer/Demand PR Publicity; Fresh Interactive (FB) Marketing; E. K. Degenfield Production Manager;  Cindy Murray Executive Director; Tal Fox Assoc. Producer and Casting Director; and most importantly, Erik Monak COVID Compliance Officer.

For right now, we’re pretty much sticking with shows that come as part of our subscriptions or are of interest through our memberships. That may change later in 2022. Looking at the first half of 2022: February concludes with Marvin’s Room at Actors Co-op (FB). March brings The Lehman Trilogy at the Ahmanson Theatre (FB), Trayf at the Geffen Playhouse (with the TAS Live Theatre group). April brings Ann at The Pasadena Playhouse (FB), the Southern California Renaissance Faire; and Tootsie at Broadway in Hollywood (FB). May brings Hadestown at at the Ahmanson Theatre (FB). June will see Come From Away at the Ahmanson Theatre (FB) and Pretty Woman at Broadway in Hollywood (FB), plus as much of the Hollywood Fringe Festival as we have the energy for.