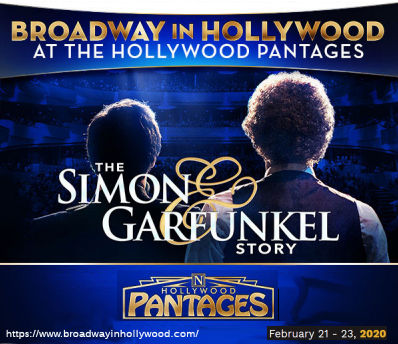 Sunday was our crazy day of theatre in Hollywood, due to my forgetting to enter my 2019-2020 season tickets on my Google Calendar when I renewed my  Hollywood Pantages (FB)/Broadway in Hollywood (FB) subscription. Lesson learned for 2020-2021 — they are already on my calendar. In any case, when the Pantages mailed out an announcement regarding the availability of the bonus show The Simon & Garfunkel Story, I quickly grabbed Saturday matinee tickets. It was only when I went to put the on my calendar that I realized I hadn’t entered my series tickets. So I did … and discovered we had season tickets for Escape to Margaritaville that evening. Boy, was I glad I had done a matinee for S&G! So yesterday was a double Broadway in Hollywood day: S&G at the Pantages, followed by Margaritaville at the Dolby. Whew!

The Simon & Garfunkel Story (FB) is, essentially, a Simon and Garfunkel concerts. There’s little pretense of it being much more. There’s no book writer, no fake story constructed from the songs (such as Margaritaville or All Shook Up). There isn’t acting of a bio story (along the lines of Beautiful or Summer). There isn’t even a director in the traditional theatrical sense. There are actors portraying Paul Simon and Art Garfunkel, a backing band, and a snippets of biographical information and story background along the way.

Musically, the show is excellent. The actors (George Clements (★FB) Paul Simon and Andrew Wade (★FB, FB) Art Garfunkel) are great performers, and capture the harmonies well. Individually (and when not singing) they don’t quite have the same voice and personality of the originals, but the personality that does shine through it good. Clements didn’t have quite the same nasal quality as Simon (he was about 90% there), and Wade didn’t have quite the pure tenor of Garfunkel but had the power when he needed it (he was about 90% there). They were close enough that one could enjoy the music, and mostly hear the same thing as the albums (there were a few slight differences). So on the music side, you won’t be disappointed.

I’ll note that the program credits two additional actors for Simon and Garfunkel (Taylor Bloom and Ben Cooley, respectively), although it is unclear when they are actually performing the roles. A “boo” to the Pantages for not having a signboard in the lobby indicating the actors that were in each role.

On the story side, however, there could have been so much more. It is here that the lack of participation by the real Paul Simon and Art Garfunkel were apparent. The audience was left wanting for more details on the backstory, for more details on the backstory of each of the songs. The projections would have been so much better with real pictures of the duo from those days, including pictures that had never been seen before. But although there were some bits of information there that might not have been well known, there just could have been so so much more.

The projections had another problem: inaccuracy and incorrectness. From the use of modern images to respresent the past (e.g., that livery for British Airways wasn’t used back then — it might even have been BOAC, or that the postcards during “America” were too modern, or that images were from the wrong era of the story), to the disconnection of the image from the song (e.g., the postcards should have corresponded to the story points in “America”, the voices of old people from Bookends had images of children, and — for whatever reason — the images in Scarborough Faire were anti-war. Folks, if you want to do an anti-war song from that era of S&G, do Silent Night/6 O’Clock News. It is far more moving.

The last performance of The Simon and Garfunkel Story at the Hollywood Pantages (FB)/Broadway in Hollywood (FB) starts in little over an hour. You might be able to get tickets at the box office. The Simon & Garfunkel Story (FB) is on tour, however, so if you’re in Spokane WA or Canada, it’s coming your way.

Saturday afternoon brought Escape to Margaritaville at the Dolby Theatre/Broadway in LA (FB), which is next to be written, and we just got back from Step Afrika at the Soraya/VPAC (FB) … which was great, but I’m probably not writing it up.

As for the last weekend of February, I’ll be in Madison WI visiting my daughter, the the lineup she has scheduled is busy: Madison’s Funniest Comic Contest on Wednesday (meaning I’ll miss Survivor), The Revolutionists from Mercury Players Theatre/Bartell Theatre on the UW Madison campus on Friday (Eileen Evers is an alternative); the Lee Blessing play Down The Road from Two Crows Theatre Company on Saturday (columbinus at Edgewood College is the bad weather backup), and MST 3000 on Sunday. Whew! Alas, I’ll be missing both Nefesh Mountain at Temple Israel of Hollywood and Tom Paxton and the Don Juans at McCabes due to this.

March starts with Passion at Boston Court (FB) the first weekend. The 2nd weekend brings the MRJ Man of the Year dinner (and The Wild Party at Morgan Wixson). The 3rd brings Morris’ Room at Actors Co-op (FB) ; and the last weekend brings Spongebob Squarepants at the Dolby Theatre/Broadway in LA (FB) and the MoTAS/TBH Seder. April is similarly busy: the 1st weekend is Mamma Mia at 5 Star Theatricals (FB); the 2nd is during Pesach and is open (but has Count Basie at the Soraya/VPAC (FB) the Thursday before); the 3rd is Once on This Island at the Ahmanson Theatre; the last is Hamilton at the Hollywood Pantages (FB) (and possibly Hands on a Hardbody at the Charles Stewart Howard Playhouse (FB)), and the first weekend of May is Mean Girls at the Dolby Theatre/Broadway in LA (FB).