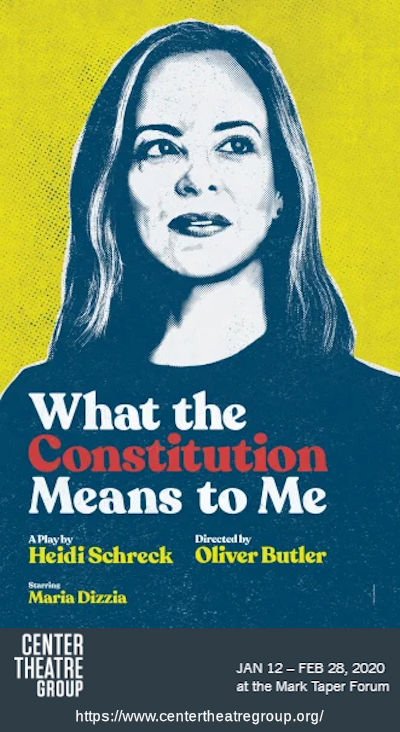 And with a return to Jr. High Debating Club, our theatrical year starts off with a bang, and a reminder of why this year is so important. The fundamentals of our nation are at stake, and this play reminds us why we must get out there and march and vote to protect our hard fought rights.

But back to Jr. High first. When I was in 8th and 9th grade, I was in Mrs. WIlliams Debate Club, and I actually enjoyed debating. Researching the premise, establishing your position, defending your thoughts. It was wonderful mental exercise and training.

The production currently at the Mark Taper Forum, What the Constitution Means to Me, is centered around the debate that is at the heart of America. It presents the real story of the play’s author, Heidi Schreck (FB), represented here by Maria Dizzia (FB). It essentially has three acts. In the first, Shreck goes back to her days as a 15 year-old doing American Legion debates for college funds, talking about what the constitution means to her. This includes digression into areas of interest to her, such as what the constitution says about womens rights and Native American rights. The second part brings us the story of the current Shreck, her family history of violence against women and abortion, and what the constitution says about that. In the third and last part, Shreck debates a 15-year old student about whether to keep or rewrite the constitution. The production was directed by Oliver Butler.

In trying to decide how to write this up, I read McNulty’s review in the LA Times. For the general opinion on the production, I agree with McNulty:

Let me preface this review of Heidi Schreck’s “What the Constitution Means to Me” with a strong plea to every man, woman and mature teenager in the Los Angeles area to see this play, which opened Friday at the Mark Taper Forum.

At a time when the Constitution is being assailed by those who have sworn an oath to defend it, this buoyant and often-stirring civics lesson is the theatrical curriculum Americans desperately need now.

As much a play as a performance piece, “What the Constitution Means to Me” reveals with courageous poignancy the way our nation’s founding legal document intersects with the choices, opportunities, relationships and destinies of those who have had to fight for their foothold in our imperfect democracy.

I agree with McNulty’s assessment of Shreck and the subject matter. Caution is required for those who have experienced sexual violence: there is reference to it in the play, and it could be triggery for some. But, alas, how our constitutions protects or fails to protect those subject to violence should be even more reason for people to vote.

You also get a present from this production: A pocket copy of the constitution courtesy of the ACLU. Read it. It’s scary at times. For example, it only refers to the President as “he”. Could this be used by originalists to argue that women can’t be President. This is why we so need the ERA to pass. It also shows that the President could shut down Congress with a declaration of an emergency. I wouldn’t put it past this President to do so if he couldn’t get his way — again, reason to vote.

This play demonstrates that the constitution is personal, and affects everyone one of us. It is why we must fight to defend it against those who would abuse it or make it a travesty.

As I said, I agree with McNulty’s assessment of the play, and of Dizzia’s performance. They did make a change in the play for the tour: about two-thirds into the play, the artifice of Dizzia’s playing Shreck is abandoned, and she is herself, sharing some of her story and what the constitution means to her. McNulty also covers well the fellow who plays the American Legion representative (and himself): Mike Iveson (TW). McNulty also covers the student debater who performs Wed, Fri, Sat matinee, and Sunday evening, Rosdely Ciprian.

However, Rosdely’s not the only student. Tues, Thurs, Sat evening, and Sunday matinee we get a local student, Jocelyn Shek (FB). That’s who we had, and we were impressed with the young woman and her debating style. For a stage-novice, she shows the poise and quick thinking that debate training gives one.

What the Constitution Means to Me continues at the Mark Taper Forum/Center Theatre Group through February 28. Tickets are available through the CTG box office; discount tickets may be available on Goldstar or on TodayTix. This is a show every American — or anyone wanting to understand the Constitution — should see

This evening brings our second show of the weekend: Frozen at the Hollywood Pantages (FB). We then get busy. The last weekend of January brings Cirque Éloize at  the Soraya/VPAC (FB).

Things heat up in February, with The Last Ship (with Sting) at the Ahmanson Theatre the first weekend. The second weekend brings West Adams at Skylight Theatre (FB) on Saturday, and the $5 Shakespeare Company from The Sixth Act (FB) at Theatre 68 on Sunday. The third weekend brings A Body of Water at Actors Co-op (FB) and It Shoulda Been You at Musical Theatre Guild (FB). To top all of that, the fourth weekend brings  The Simon and Garfunkel Story at the Hollywood Pantages (FB), Escape to Margaritaville at the Dolby Theatre/Broadway in LA (FB), and Step Afrika at the Soraya/VPAC (FB) the fourth weekend. Yes, that is the Pantages and the Dolby the same day — that’s what I get for not entering season tickets on my calendar before ticketing a bonus show. The last weekend is open, but I’ll probably find some theatre in Madison WI when I’m out there; alas, I’ll be missing both Nefesh Mountain at Temple Israel of Hollywood and Tom Paxton and the Don Juans at McCabes.