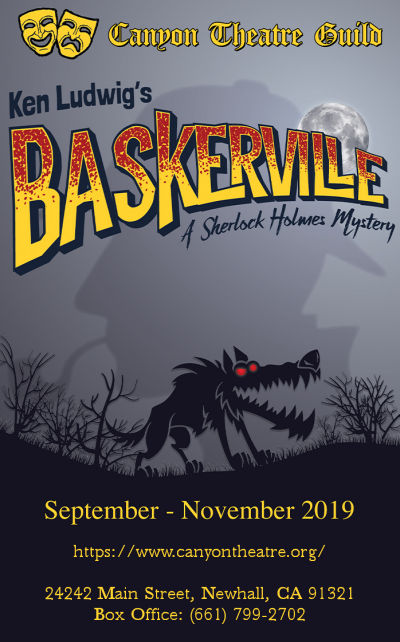 Last weekend was a weekend of murder mysteries and humor, cross-dressing and loads and loads of characters, played by very few people. Saturday brought The Mystery of Irma Vep at Actors Co-Op in Hollywood. Sunday saw us up in Santa Clarita for Ken Ludwig‘s Baskerville: A Sherlock Holmes Mystery at Canyon Theatre Guild (FB), which was being directed by the former proprietor of the former REP East Playhouse down the street (now “The Main“), O Michael Owston (FB). The former (Vep) had two actors playing about 10 difference characters; the latter (Baskerville) has five actors playing about 40 different characters. The former was at a professional membership theatre company (which primarily means they can use union actors); the latter is at a community theatre. Both were mysteries whose goal was humor, not fright. Both dealt with hell hounds and mysteries on the moor. Most importantly, both were well executed and fun to watch.

Ken Ludwig‘s Baskerville: A Sherlock Holmes Mystery is an adaptation of Sherlock Holmes‘ The Hound of the Baskervilles. Ludwig retains most of the story (read the synopsis from Wikipedia here), only changing Sir Henry to a transplant from Texas. As executed, two of the actors take the lead roles of Holmes and Watson; the remaining three actors take all the other thousand or so roles.

Initially, when the play started, I had concerns that the same “woke” issues that bothered me about Irma Vep would appear: namely, stereotypes and cross-dressing. The cross-dressing is a bit problematical and played for laughs; luckily, it only occurs one one of the early scenes and isn’t constant through the show (and is forgotten quickly). Similarly, the stereotype problem only applies to one character (the Sicilian) who only makes a brief appearance. All of the other characters portrayed to not raise any “woke” hackles.

O had to be a bit creative in staging this production, as the space is shared with a concurrently running production of Peter and the Starcatcher … meaning a shared set. This means that the set is a series of platforms, and the primary scene establishing devices are chairs and props that can be brought on, as opposed to more detailed set pieces to establish the context of Baker Street vs the Baskerville Manor on the Moor, or other specific locations. O takes advantage of this to play up the humor, especially in the early points of the play when the initial exposition is being established.

In the lead positions are Jeremiah Luther True (FB) Sherlock Holmes and Matthew Thomas Stallings (FB) Dr. Watson. True, even though his character is in the title, has the smaller role — and as is Holmes’ nature, the stiffer role. He captures Holmes well, but there have been so many Holmes portrayals over the years, it is hard to assess what “well” is given the tropes in our mind. But he comes across as suitably Holmesish. In contrast, Stallings is very strong as Watson. Stallings gets to carry the primary narrative of the story; he’s the one who does most of the interactions with the other characters and the one who does most of the leg work and investigations. He does this very well, and handles the straight-man aspects of it strongly.

The portion of the cast that really shines are the remaining three actors: Eduardo Arteaga (FB) Actor 1; Kirsten Rast (FB) Actress 1; and Tanner Burghardt (FB) Actor 2. Although I was joking earlier about thousands of roles, these three take on around 40 different roles. I was unsure about Arteaga at the start, as he was cross-dressing with a beard. But he was strong as Sir Henry and Inspector Lestrad, and worked quite well with Stallings’ Watson. Even stronger were Rast and Burghardt. They got the bulk of the numerous different roles, and were extremely strong and funny. Rast was wonderful in all her roles, especially as Beryl and one of the irregulars. Burghardt got to the loads of different characterizations; his best were Mortimer and Stapleton, but all were fun to watch (especially as he dealt with beards that didn’t want to cooperate). Looking back at the show a few days later, I remain impressed by the work of Rast and Burghardt.

Turning to the production and creative side: Set Design, Construction, and Dressing was by the director, O Michael Owston (FB),  which isnt’ a surprise given his current artistic endeavor. As I indicated, the primary set was a series of platforms that had to be adaptable to both Baskerville and Peter and the Starcatchers. Augmenting this was dressing that established the sense of place: chairs, tables, and such. Additional properties were by Laurie Morgan (FB). The primary sense of place and characters came from the costumes of Eduardo Arteaga (FB), which did a great job of establishing the individuality of each character, especially when combined with the unique performance characteristics that O brought out of the actors.  Long-time REP regular Steven “Nanook” Burkholder (FB) provided appropriate sound effects; my only quibble is that the mood-establishing music might be turned down a tad as it overpowered the actors at times. Mackenzie Bradford (FB)’s lighting design did a good job of augmenting mood and establishing time. Rounding out the production and support credits: Musetta Caing Hart (FB) Assistant Director; Nicholas Woodworth (FB) Stage Manager; Musetta Caing Hart (FB) Program Editor; Timothy Hart (FB) Asst Program Editor; Barbara Yeager (FB) House Manager; TimBen Boydston (🗳FB, FB) Executive Artistic Director.

Note that CTG labels their seats different than most theatres: Numbers represent the row, and letters represent the seat (and O and Q appear to be omitted). Thus, our seats were R2 and S2. This seemed to be an endless source of confusion for, shall we say, the “typical” Sunday afternoon matinee audience.

Baskerville: A Sherlock Holmes Mystery continues at Canyon Theatre Guild (FB) in Newhall (Santa Clarita) through November 3. It’s a funny show with strong performances, at a well-established community theatre. Tickets are available through the CTG Online Box Office; discount tickets may be available through Goldstar.

Next weekend brings Anastasia – The Musical at the Hollywood Pantages (FB). The third weekend of October brings us back to the Kavli for The Music Man at 5 Star Theatricals (FB), followed by In Trousers at the Lounge Theatre from Knot Free Productions. October concludes with Mandy Gonzalez at the Soraya/VPAC (FB) and the MoTAS Poker Tournament.