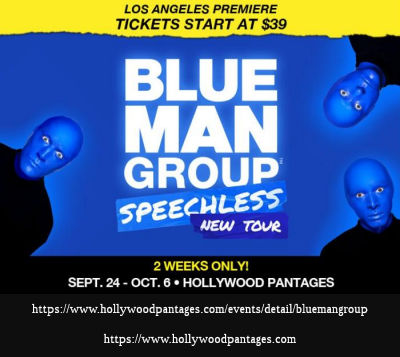 I’m not sure either change was for the better, but we’ll talk about the Monte Carlo later 🙂

In general, the Blue Man Group was, well, the Blue Man Group. Strange. Silly. Wordless. Playful and curious. Childlike and childish. There were sequences that were great (such as the paint marshmallows). Audience participation was fun. But there was something off. The energy and madness was toned down a notch. It wasn’t the craziness I remembered from Vegas.

I can’t quite pinpoint the problem. Was it the significantly larger house? Was it a seeming over reliance on technology, including a massive technological set? Was it the safety for the audience a tour provides? I’m not sure. I just know the show didn’t “wow” me as it did the first time I saw them on stage.

I do not mean to imply they were bad. I thoroughly enjoyed the show. But Blue Man Group brings a certain imprimatur, a certain cachet, a certain expectation. They didn’t quite live up to that expectation; they hit the 85-90% mark.

The cast consisted of Blue Man, Blue Man, and Blue Man, with a Blue Man in reserve. They were played by Meridian, Mike Brown, Steven Wendt, and Adam Zuick. Pick any three of four, because we have no idea who was whom. The show was written by Jonathan Knight, Michael Dahlen, and the Blue Man Group.

The Blue Man Group Speechless Tour continues at the Hollywood Pantages (FB) through October 6. Tickets are available through the Pantages web page, as well as numerous other places.

Saturday night brings Blue Man Group at the Hollywood Pantages (FB). We start getting really busy in October, starting with The Mystery of Irma Vep at Actors Co-op (FB) and Ken Ludwig’s Baskerville at Canyon Theatre Guild. The next weekend brings Anastasia – The Musical at the Hollywood Pantages (FB). The third weekend brings us back to the Kavli for The Music Man at 5 Star Theatricals (FB), followed by In Trousers at the Lounge Theatre from Knot Free Productions. October concludes with Mandy Gonzalez at the Soraya/VPAC (FB) and the MoTAS Poker Tournament.

Looking to November, it starts with A Miracle on 34th Street – The Radio Play at  Actors Co-op (FB), followed by Big Daddy the Band of 1959 at McCabes (FB) in Santa Monica.. The second weekend brings Summer at the Hollywood Pantages (FB) and The Goodbye Girl at Musical Theatre Guild (FB).  The third weekend is open, but may bring an outing of our new live theatre group at our synagogue to Eight Nights at the Anteaus Theatre Company (FB). November concludes with Bandstand at Broadway in Thousand Oaks.

December is relatively open right now, given that we lose two weekends to ACSAC, and the small theatres are often darker around the holidays. I do have a hold for December 17 for Elf at Canyon Theatre Guild. I also have a hold for January 4 for What The Constitution Means To Me at the Mark Taper Forum, but I’m waiting for the presale to start to confirm that date.