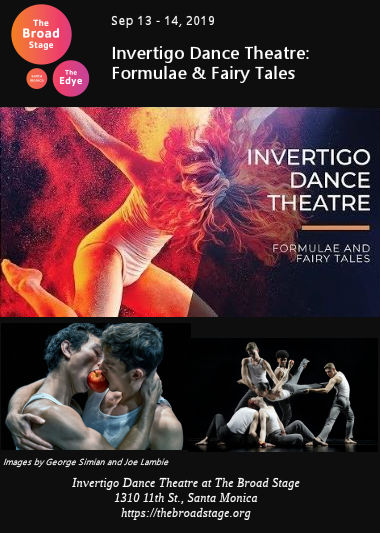 Our summer performance hiatus is over. As a side effect of Fringe burnout and the surfeit of performances that come out in July, we tend to have a lighter attendance schedule at the end of August and in early September. But that hiatus is over, and it is weekly live performance from now until December, when the conference creates another hiatus. First up: Alan Turing.

Back in early August, I received an email from The Broad Stage (FB) about an upcoming production that caught my eye. It talked about a performance that “invites us into the life of mathematical genius Alan Turing as cast into the mythologized ideas of his favorite film, Disney’s Snow White and the Seven Dwarfs.” Now I’ve been doing computer science since the mid 1970s, and computer security since the mid 1980s, so any story about Turing intrigued me. I went to the Broad web page for the event, and read the following:

Now, I’m not much of a dance person, other than in the context of a musical. I didn’t quite understand the Martha Graham company when I saw it, and I never saw what others saw in Matthew Bourne’s work. But this sounded fascinating. One does not often see pioneers of computer science on the stage, nor does one often see cryptography on stage. Computer Security, in general, gets little attention from live theatre artists. And so, with curiosity peaking, I went out to Goldstar and grabbed some tickets.

Now that I’ve seen the performance, I’m still working on processing it. Much of this is a vocabulary problem. Theatre, in many ways, is easy. We have words, we have stories. We have performance that is either realistic or mock-realism. We can typically relate what we see on the stage to what we know in real life, and can thus assess it.

Dance is much more abstract, especially in a piece where you don’t know the story ahead of time. This piece had some explanatory text, but the story was mostly told in dance and movement. The dance world has its own conventions, and if you are not fluent in them (which I am not), both understanding and describing them are difficult.

That said, the dance here was beautiful. There were feelings that were raised; feelings and images. There was the sense of cogs in a wheel; cogs in a machine; cogs in a rotor. That’s appropriate, given the nature of the Enigma. There were elements of the Snow White story, and there were clearly mathematical elements. There were notions of relationships, both conventional and non-conventional. All of these were from the movement, aided at times from the projections.

There was clearly metaphor: in particular, in the sequence using the Turing quote about how “one day ladies will take their computers for walks in the park and tell each other, ‘My little computer said such a funny thing this morning”, all the computers that were taking to the park were … apples. Could this a reference to Apples and the iPhone?

The dance also involved spoken elements, sometimes cryptic, relating the story of Turing. A repeated motif was the invocation of the Turing Test, which had slightly different construction each time it was invoked — and none of the times fit precisely what Computer Scientists understand as a Turning test (interacting with an unknown entity you cannot see, and through questions along, you make the determination of human or not).

Overall, the production was beautiful to watch. I can’t say it was what I expected, but I’m not sure what I was expecting.

We caught the last performance of Intvertigo at the Broad, although I have heard rumors that this production may be touring.

Next weekend brings Barnum at Musical Theatre Guild (FB), and the the last weekend of September brings Blue Man Group at the Hollywood Pantages (FB). We start getting really busy in October, starting with The Mystery of Irma Vep at Actors Co-op (FB) and Ken Ludwig’s Baskerville at Canyon Theatre Guild. The next weekend brings Anastasia – The Musical at the Hollywood Pantages (FB). The third weekend brings us back to the Kavli for The Music Man at 5 Star Theatricals (FB), followed by In Trousers at the Lounge Theatre from Knot Free Productions. October concludes with Mandy Gonzalez at the Soraya/VPAC (FB) and the MoTAS Poker Tournament.

Looking to November, it starts with A Miracle on 34th Street – The Radio Play at  Actors Co-op (FB), followed by Big Daddy the Band of 1959 at McCabes (FB) in Santa Monica.. The second weekend brings Summer at the Hollywood Pantages (FB) and The Goodbye Girl at Musical Theatre Guild (FB).  The third weekend is open, but I’m looking at a number of shows. November concludes with Bandstand at Broadway in Thousand Oaks.

December is relatively open right now, given that we lose two weekends to ACSAC, and the small theatres are often darker around the holidays.