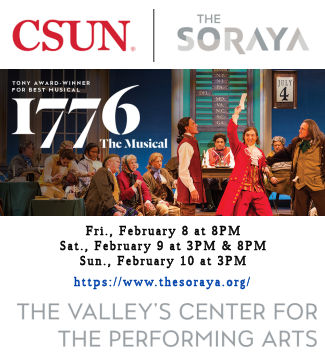 We have (well, most of us have) celebrated the rise of a new musical over the last few years that tells the story of the founding of America. A musical that has been playing to sold out houses, returning to cities over the country again and again (it will be returning to Los Angeles in March 2020). This musical, while framing the story in the modern immigrant narrative, shows the ugly personal and political battles that the founders engaged in. There was petty jealousy, there were strong disputes about how the county should move forward and establish itself. It wasn’t pretty, and the founders were far from perfect men. Even those protesting the history contain in the show aren’t trying to show the perfect of the men in the story, but to show them as even less perfect than the musical holds them out to be.

But this show wasn’t the first to put the creation of the nation on the musical stage. Fifty years ago — back in 1969 — another musical premiered that told the story of the creation of America — a musical that shared Broadway with the rock musical of its day, Hair — and bested it at the Tony Awards. That musical was 1776, with music and lyrics by Sherman Edwards, and book by Peter Stone, based on an original concept by Sherman Edwards.

1776 shares a moment in time with that other musical, Hamilton. focusing on a two to three month period in 1776. It shares only two characters with Hamilton: Thomas Jefferson and John Adams. But it makes the same point: this is a nation that is built on compromise with those you disagree with. It makes the same point: our nation was founded by imperfect, but passionate men. 1776 portrays our founders not as paragons of virtue, but as flawed men: gluttons, drunkards, womanizers, and much more. It shows how they were flying by the seats of their pants, and taking immense risks to create this nation.  It shows that many of the political battles of today existed at this nation’s founding: battles over taxes, battles over the treatment of minorities, the battles of Conservatives vs LIberals. When John Dickenson sings that people will follow the Conservatives because most people would rather protect the possibility of being rich than face the reality of being poor, that is something that one could sell in the poorest “red” precincts of this country. When Jefferson and Adams stand up for the rights of the Negro, this is a battle that is still being fought. And when Jefferson is forced to admit that he is a practitioner of that filthy practice of slavery, he is admitting complicity in the immoral practices of his time, just as the leadership of Virginia has been caught up today. It demonstrates that America was, and still is, a nation that is built upon imperfection and compromise.

So I think we have established that 1776 is an important musical to be seen — in the abstract. So why this production, and why now? First, because to see live theatre at the Saroya (nee VPAC) (FB) demonstrates that the San Fernando Valley wants first class musical theatre in the heart of the valley. Second, because in the political times we are facing today, it is important to remind ourselves of the need to compromise with those with whom we disagree, in furtherance of a larger and more important goal. Third, because the production team behind this production, McCoy – Rigby (FB), has a proven track record of doing strong theatre both at the southern edge of Los Angeles County, and now here in the valley. Lastly, because this production itself is very strong (I had only a few minor quibbles). Alas, however, the Saroya only bring in these shows for one weekend. We need to encourage them to do more theatre — both bringing in productions, as well as presenting on the Saroya stage, for the Saroya audience, more of the excellent work done by the Theatre department on campus.

This is not to say that 1776 doesn’t have its flaws. The roles for women in the production are both few and miniscule. They interact with the men more as wives; one is on for essentially two scenes and one song, and then disappears. Even some of the men have tiny roles: one song and gone. The production — mirroring those times — is excessively single hued, and does not hold up to broader casting well. There are extremely long stretches of dialogue with no music; at times this is more of a play with music than a musical. There is no latitude for creative staging: the show builds up to a single tableau at the end, and must do so for the story to work.  Lastly, as Wikipedia summarizes, there are numerous historical flaws and inaccuracies in the story. In the last case, yet again, this is just like that modern musical, Hamilton, which also adapts history for dramatic purpose.

But even in acknowledging the flaws in the work, the show is an important one to be seen for its message. Although this production has come to a close, if 1776 shows up again near you, go see it.

Luckily, the production team of Glenn Casale (FB) [Direction and Staging] and Jeff Rizzo (FB) [Musical Direction], were up to the task. They essentially used two scenic areas: the meeting room of the Continental Congress, and a space in front of a shuttered wall for all the other scenes. Within these limitations, they helped the story to unfold, with the help of the acting team.

In the lead performance position was Andy Umberger as John Adams (Mass.). Umberger captured the fire and the passion of the character well, and had a strong singing voice demonstrated in so many numbers. Working with Umberger was Peter Van Norden (FB) as Benjamin Franklin (Penn.). Van Norden’s was the one performance that didn’t set me on fire. It wasn’t bad, but he just didn’t seem to fit the character for some reason, which made the performance a little bit off. But that’s just my opinion. Rounding out the main trio was Caleb Shaw (FB)’s Thomas Jefferson (Virginia). He gave a strong and spirited performance, although his wig needed a touch more red in it to fit with the comment made by Adams about his being red-headed.

This brings us to the two women in the cast, who are relegated to ancillary characters: Teri Bibb (FB) as Abigail Adams and Ellie Wyman (FB) as Martha Jefferson. Wyman gave a standout performance both in voice and dance and playfulness during her one scene and one song (“He Played the Violin”). We see more of Bibb, but her character is more restrained. She does have a lovely singing voice.

Turning to the production and creative team: I’ve already mentioned Stephen Gifford (FB)’s Scenic Design and how that worked well. It was supported by the Properties Design of Kevin Williams (FB). I should note that I missed the nice “rip” of the dates; but I understand the need for removable dates. The Costume Design of Shon Leblanc (FB) mostly worked well; however, the red heels on the black shoes of John Dickinson were a distraction. Other than that, both the costumes and the hair / wig / makeup design of Eb Bohks (FB) seemed reasonable period and were effective in conveying the characters. Again, this is an area where there is limited creativity, as the end result has to fit Trumbull’s tableau painting of the signing. The sound design of Philip G. Allen (FB) and Leon Rothenberg (FB) mostly worked well, although there were a few annoying sound drops that I’ll attribute to mistuning on the move from La Mirada to VPAC / Saroya. Jared A. Sayeg (FB)’s lighting conveyed place and mood well. Rounding out the production credits: Julia Flores (FB) [Casting Director]; Justen Asher (FB) [Technical Director]; Patti McCoy Jacob (FB) [General Manager]; Ana Lara (FB) , Lindsay Brooks (FB), and David Nestor (FB) [Production Management]; John W. Calder III (FB) [Production Stage Manager]; Heidi Westrom (FB) [Asst. Stage Manager]; and David Elzer (FB) / Demand PR (FB) [Publicity]. 1776 was produced by McCoy Rigby Entertainment (FB), originally for The La Mirada Theatre for the Performing Arts (FB) .

The day we saw 1776 was theatrical whiplash, as we ran out of the production to head over to Hollywood for Anna Karenina at Actors Co-op (FB).  Presidents Day weekend brings  The Joy Wheel at Ruskin Group Theatre (FB) in Santa Monica.  The last weekend of February is our annual trek to the Anaheim Hills for Lizzie at the Chance Theatre (FB).

March starts with Matthew Bourne’s Cinderella at the Ahmanson Theatre (FB), followed by the annual MRJ Regional Man of the Year dinner at Temple Beth Hillel. The next weekend brings “Disney’s Silly Symphony” at the Saroya [nee the Valley Performing Arts Center (VPAC)] (FB). The third weekend of March brings Cats at the Hollywood Pantages (FB). The following weekend is Matilda at  5 Star Theatricals (FB). March concludes with us back at the Hollywood Pantages (FB) for Charlie and the Chocolate Factory.

Lastly, looking into April: The month starts with Steel Magnolias at Actors Co-op (FB) and the MoTAS Men’s Seder. The next weekend has a hold for OERM.  April will also bring Fiddler on the Roof at the Hollywood Pantages (FB) and the annual visit to the Renaissance Pleasure Faire.