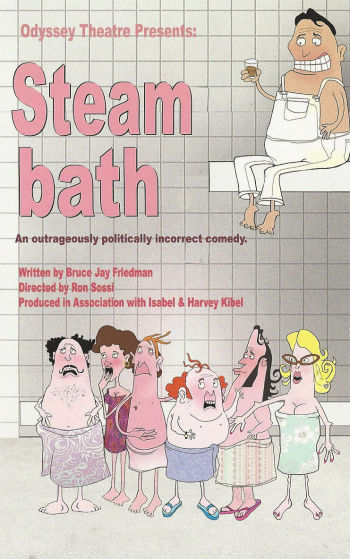 Back when I was 13, there was a production on TV that I remember to this day (although I can’t remember if I saw the original airing or a repeat): the play Steambath, written by Bruce Jay Friedman, was broadcast on our local PBS station (it might even have still been NET) station, KCET. Why was this broadcast notable?  Well, it could have been the subject: death and limbo and God as a Puerto-Rican steambath attendant. It could have been the talent: Bill Bixby, Valerie Perrine, Herb Edelman, Jose Perez, Stephen Elliott, Kenneth Mars. But for most 13 year old boys, it was the fact that KCET showed it uncensored, and you got to see Valerie Perrine’s tits (and, yes, that’s how they are referred to in the play — she doesn’t like the term “knockers”).  It is available on DVD, but I did find one scene on YouTube — and that scene demonstrates how stereotypical it was, and how reflective it was of its times. There are jokes that today would be insensitive — it is in many ways a period piece.

I mention all of this because Saturday night, we saw Steambath at the Odyssey Theatre Ensemble (FB). Yes, it had its dated aspects. But it was also laugh out loud funny.

Steambath is a comedy, but it is also a philosophical, perhaps even theological piece. When the play opens, we’re in a steambath. An older man, Tandy, has just arrived. He starts talking (as one does in a steambath) with the oldtimer there, who is constantly complaining about a man sitting on an upper bench in the steambath, being … well, gross. Spitting, clipping his toenails, etc. We also meet the other men in the bath: two gay men (or, as they are referenced in the play, the “fags”, as the term “gay” wasn’t common then), and a stockbroker. A woman comes in, takes off her towel, showers, and leaves. This gets the discussion going. Eventually, the woman returns; her name is Merideth. There’s lots of discussion back and forth while we get to know the characters, and for some, we start to get the notion this isn’t what it seems. Eventually, they figure that out as well. Specifically, they come to realize that they are dead. Tandy asks who is in charge, and he is pointed to the Puerto Rican steambath attendant. The attandant comes in, goes to a console, and starts doing god-like stuff: directing cars to crash, people to get shot, etc. Eventually, Tandy confronts him and gets him to prove that he is God. This proof takes up the remainder of the first act, and is very very funny. Pick a card type funny.

The second act gets a bit more serious, as our characters tell their stories, and one by one leave the steambath to go…. on. Tandy refuses to do so — he doesn’t accept his death. He’s trying to argue to God that he has turned his life around, and he deserves to go on. But God eventually shows him that he hasn’t changed as much as he thought, and he, too, eventually goes through the door.

Even with the what are now politically incorrect jokes, the play was very very funny. Under the direction of Ron Sossi (FB) and the choreography of Dagney Kerr (FB), the characters came to life and action was well paced. It didn’t help that God was extremely talented and funny, which is no surprise given that God was portrayed by Paul Rodriguez (FB) (who alternates in the role with Peter Pasco). Rodriguez inserted his own brand of funny, including adding some jokes that he admitted were from the future, and the characters probably wouldn’t understand. There was one particularly crude one about Monica Lewinsky, for example.

In the other lead positions were Jeff Lebeau (FB) as Tandy and Shelby Lauren Barry (FB) as Meredith (who had a well-secured towel). Both were excellent. Lebeau brought a nice warmth to Tandy creating a likable character who you didn’t want to see leave — he really did give the sense of a man who had turned his life around. Barry was also likable as the young woman into clothes, shopping, and the 1970s lifestyle; she proved a good sounding board for Lebeau’s Tandy.

In the next tier were John Moskal (FB) as the Oldtimer, and Robert Lesser (FB) as Bieberman, the other old man whose habits irritated the Oldtimer so.  Both captured their characters well. Moskal was great as the man who had been everywhere and seen everything, and thought that he knew everything. Lesser’s Bieberman captured the annoying quite well in the first act, and had an interesting story in the second.

Rounding out the steambath “residents” were Brian Graves (FB) as the Broker, and DJ Kemp (FB) and Devan Scheolen (FB) as the “Young Men” (i.e., “fags”).  Graves main role is to be athletic and concerned about business and he pulls that off quite well. Kemp and Scheolen get to have a more musical turn (you’ll get an idea if you watched the YouTube clip from the TV version). They portray the characters well and as written, but that characterization is a very early 70s view of homosexuals played for the humor. Just understand that’s what you’ll be getting, and you’ll enjoy their performance.

Rounding out the cast were Yusuf Yildiz (FB) as Gottlieb, the attendant for God; Anthony Rutowicz (FB) as the Longshoreman / Detective, and Shay Denison (FB) as the Young Girl. The latter two are smaller roles in the second act; Yildiz’s role is larger and is primarily a straight-man to Rodriguez’s comic God. He does that well.

Sunday night of Thanksgiving weekend brought Remembering Boyle Heights at Casa 0101 (FB) in Boyle Heights, which I’ll write up tomorrow. December starts with the Annual Computer Security Applications Conference (ACSAC). It will  also bring Come From Away at the Ahmanson Theatre (FB). Other than that, December is open while we recover (other than the obligatory movie on Christmas Day — our one day a year for filmed entertainment).