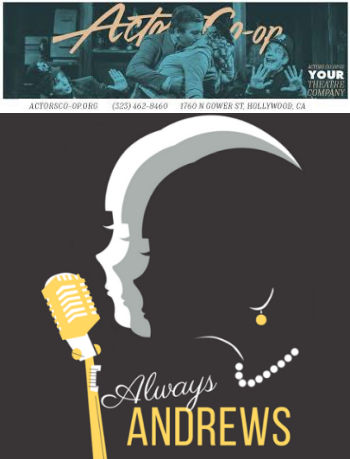 Our second show of the weekend was a much simpler production (in fact, I was thinking it could have been mounted at the Fringe Festival — it was that simple): Always Andrews, part of the Actors Co-Op Too! Summer Series at  Actors Co-op (FB) in Hollywood.  Actors Co-Op Too! is a series of short run productions used to explore new plays, grow new directors and new actors, and season the acting muscles of existing company members. In this case, company member Jorie Janeway (FB) brought in a production she had been developing with two friends, Carlyn Connolly (FB) and Katharine Quinn (FB) that was essentially a showcase of the music and history of The Andrews Sisters, a sibling group (Patty, Laverne, Maxine) that was popular during World War II. They were known for their tight harmonies, their humor, and there unique musical stylings and approaches to songs.

Janeway, Connolly, and Quinn had developed the notion for this show while working together on a different show in Virginia; they had been honing it over the years. Quinn was unavailable for this run, so Adrian Mustain (FB) jumped in with only a week or two of preparation.  The performers did two sets of Andrews Sisters songs:

I thought the selection of songs was good, although they should look to included one of the Andrews Sisters’ “injected patter” songs — listen to something like their version of “Sonny Boy” for an example. I also thought a bit more history would be good: they didn’t mention the sisters by name. One person during the talkback noted they should indicated how they got their start. I think it would also be worth noting what happened after the war: they continued during the 1950s and 1960s, and the Sherman Brothers of Disney-fame developed a Broadway show around them.

Each performer did not assume the role of a particular sister, although Jorie did most of the humorous bits. I thought that both Jorie and Carlyn had strong singing voices. Adrian’s was a bit weaker, but she noted during the talkback that it was stronger the week before, so it could have just been a touch of strain. I thought they had the movement down well, and had a good interaction with each other.

If they are still in town when next June rolls around, I suggest that they do this at the Hollywood Fringe Festival. They could easily do it within the confines of the festival — 15 minutes in, 15 minutes out — as they have no particular set and no costume changes, and it could give them some very strong exposure.

Music was provided by Chadwick Harmon on Piano and Kyle Dombroski (FB) on Drums.

We caught the last performance of this show. Next week we catch the last Actors Co-Op Too! show, Twelfth Night.

Next weekend brings the last Actors Co-Op Too! production, Twelfth Night, or What You Will at Actors Co-op (FB). The third weekend of August will be Merrily We Roll Along, a guest production at the Colony Theatre (FB).

Looking forward to September: The first weekend of September is currently open. The second has a hold date for I Dig Rock and Roll Music at the Rubicon in Ventura. The third weekend has Ain’t Too Proud at the Ahmanson Theatre (FB) on Friday, followed by Paradise – A Divine Bluegrass Musical Comedy at the Ruskin Theatre (FB) on Saturday. The fourth weekend has Rope at Actors Co-op (FB), and the fifth brings Bark: The Musical at Theatre Palisades (FB). October is still open, with only two weekends currently booked, and one with a hold date.