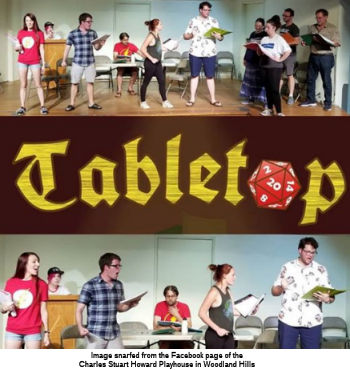 Last night, we were supposed to be seeing Jane Eyre: The Musical at the Chromolume Theatre (FB). But, alas, Chromolume has become a  a dead parrot ⚰🐦, its artistic director seemingly disappeared, and after an email of a potential resurrection, … nothing. So we scheduled something else: the first staged reading of a new musical called Tabletop about Role-Playing Gaming, at the Charles Stewart Howard Playhouse (FB) in Woodland Hills. The musical, which I believe is a first work from the authors, features music and book by Chad Sundman, and lyrics and book by Race Benaglio.

As a staged reading, there was no costumes or sets. Music was prerecorded, and sung by different performers. Actors had the scripts in their hands. There was a talkback session after the show to give the authors, and the director, Brittany Sundman, feedback on the show to help move it forward.

The story of a show, in a broad sense, was about a group of friends playing a tabletop RPG — essentially some version of Dungeons and Dragons. As the story progresses, some of the strengths they reveal in the game help them deal with their personal lives.

As this was a staged reading of a first performance, I’m going to not review or provide critiques here. We discussed the show last night with the authors. I will say that I found it a very promising work, and one whose story captured my attention and held it through the show. I’ve never been an RPGer, for the same reason I’m not up on the stage: I’m a professional audience. I’ve never had the ability to role-play in any capacity: be it at the gaming table or on the stage. That doesn’t mean I’m not an avid gamer; it is just in the realm of boardgames and strategy gaming. I’ve known many RPGer through the years — including some RPG authors. I recognized the characters; I liked the characters; I liked the growth. I hope this musical continues on and has a successful life; I’d be intrigued to see it at a future point in its life.

The performances were very strong. The cast consisted of Axel Knight (Luke), Brandon Kemmer (Brandon), Caitlyn Rose Massey (Emily, Ensemble), Canon Hamlin (Mayor, Doctor, Ensemble), David Mark Beraru (Korrow, Ensemble), Erin Goulet (Sarah), Justin Huff (Ken), Katie Lynn Mapel (Karen), Mackayla Hill (Lyla, Ensemble), Matt DeNoto (Eric), and Natalie Swanner (Valerie). I’d like to particularly call out a few of these folks.  Katie Lynn Mapel nailed it with her sardonic delivery as Karen. I truly enjoyed watching Natalie Swanner — she had a very expressive face, and was putting some lovely energy into her character that came across to the audience in the little movements and expressions. Erin Goulet was truly kick-ass with her fighting moves. Matt DeNoto’s Eric was quite strong, serving well both as the DM and exhibiting great growth in his story line. Also strong were Axel Knight’s Luke, especially in the 2nd act, and Justin Huff’s Ken in the stealth number.

On the whole, we’re glad we braved the heat to see this show. It has a lot of potential, and it will be interesting to see where it goes.

Next weekend, brings a Bat Mitzvah in Victorville, and Beauty and The Beast at 5 Star Theatricals (FB) that evening on Saturday, and the OperaWorks (FB) production “Golden Lasso” at CSUN on Sunday. The last weekend is currently open; it turns out the Muse/ique (FB) show is not that interesting. August starts with Waitress at the Hollywood Pantages (FB) on Saturday, and the Actors Co-Op Too! production of Always Andrews: A Musical Tribute to the Andrews Sisters on Sunday at Actors Co-op (FB). The next weekend brings the last Actors Co-Op Too! production, Twelfth Night, or What You Will at Actors Co-op (FB). There may also be a production of The Most Happy Fella at MTW — I’m not sure about it, but the hold date is on the calendar.