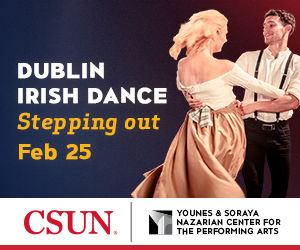 Over the weekend, we closed out our February live performances with some dance: we saw Dublin Irish Dance‘s production “Stepping Out” at the Saroya [the venue formerly known as the Valley Performing Arts Center (VPAC)] (FB). This is the “Riverdance” style of Irish Dance, although I must admit I’ve never seen Riverdance.

The production consisted of 8 musicians and 8 dancers doing what I presume is traditional Irish dance — at least that’s what they call it, although I have no idea whether the Irish dancers I know would agree. The music and the dance was technically brilliant and precise. It was beautiful to watch as they attempted to tell a story of Irish immigrants coming to America, back in the time when the Irish weren’t accepted as immigrants,

Although the production was technically brilliant, it left me… cold. I’m not sure why. The music was beautiful, and I listen to Celtic music all the time. In fact, the music sounded a lot like the recent instrumental Irish and Celtic Music podcast. The dance was precise. But unlike stage shows that I go to, there wasn’t a warmth being projected from the dancers. They were coldly precise — were they enjoying the dance? I couldn’t tell.

I think I’ll need to give this particular genre of dance another try, perhaps one day when I’m not as tired (my muscle relaxant was hitting me). It wasn’t that it was bad — it wasn’t at all. It just didn’t wow me as much as I had hoped it might.

To give credit where credit was due: The musical team consisted of Megan Burns [Vocals and Guitar], Kenneth Browne [Accordion, Banjo, Mandolin], Brian Murphy [Fiddle and Guitar], Conal Duffy [Pipes, Flute, and Whistles]; Ryan O Shaughnessy (FB) [Vocals and Guitar]; Oscar Little [Drums and Bodhran]; Marco Andrew Pes [Keys], and David Harte [Bass Guitar]. I do find it interesting that most of the musicians don’t have an identity on the Internet, not even as part of an indie Irish band. I did enjoy their sound quite a bit.

I find it telling that the program only gives bio on the choreographers. Musicians and dancers aren’t interchangable. Tell me something about these people. Celebrate them. Perhaps celebrating your performers over your staff will be reflected out.

Ob. Disclaimer: I am not a trained theatre (or music) critic; I am, however, a regular theatre and music audience member. I’ve been attending live theatre and concerts in Los Angeles since 1972; I’ve been writing up my thoughts on theatre (and the shows I see) since 2004. I do not have theatre training (I’m a computer security specialist), but have learned a lot about theatre over my many years of attending theatre and talking to talented professionals. I pay for all my tickets unless otherwise noted. I am not compensated by anyone for doing these writeups in any way, shape, or form. I currently subscribe at 5 Star Theatricals (FB) [the company formerly known as Cabrillo Music Theatre (FB)], the Hollywood Pantages (FB), Actors Co-op (FB), the Chromolume Theatre (FB) in the West Adams district, a mini-subscription at the Saroya [the venue formerly known as the Valley Performing Arts Center (VPAC)] (FB), and as of Friday, Ahmanson Theatre (FB). Through my theatre attendance I have made friends with cast, crew, and producers, but I do strive to not let those relationships color my writing (with one exception: when writing up children’s production, I focus on the positive — one gains nothing except bad karma by raking a child over the coals). I believe in telling you about the shows I see to help you form your opinion; it is up to you to determine the weight you give my writeups.

March was supposed to start with the MRJ Man of the Year dinner, but that shifted back a week. This enables us to see a remounting of Leslie Jones starring in Prez – The Lester Young Story that weekend. This is followed on the second weekend with the LA Premiere of the musical Allegiance at the Japanese American Cultural and Community Center (FB) and the MRJ Man of the Year Dinner. The next weekend brings Steel Pier at the UCLA School of Television, Film, and Theatre (FB). The penultimate Friday of March was to bring Billy Porter singing Richard Rodgers at the Saroya (the venue formerly known as the Valley Performing Arts Center (VPAC)) (FB), but that has shifted to June and that weekend brings only the joint TBH Brotherhood/MoTAS Mens Seder. The last weekend of March is currently open.

April looks to be a busy month. It starts with Love Never Dies at the Hollywood Pantages (FB) [as an aside, there was just a great interview with Glen Slater, the lyricist of that show, on Broadway Bullet that is well worth listening to]. The second weekend brings A Man for All Seasons” at Actors Co-op (FB). The third weekend brings The Hunchback of Notre Dame at 5 Star Theatricals (FB) (nee Cabrillo Music Theatre (FB)), as well as our annual visit to the Original Renaissance Faire. The last weekend of April sees us travelling for a show, as we drive up to San Jose to see friends as well as Adrift in Macao at The Tabard Theatre Company (FB).