Earlier today, a politically conservative friend of mine posted the following cartoon from Legal Insurrection: 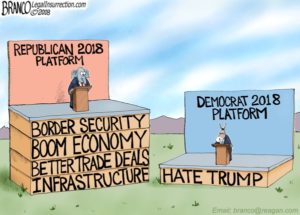 My initial reaction is the situation pictured will be about as successful as the “Hate Obama/Clinton” strategy was for the Republicans in 2016.

I’ll let that sink in a minute.

But seriously, the picture highlighted a problem and perception that I have with our progressive, resistance movement. Far too many of us are just as knee-jerk in our hatred of Trump as the Conservative side was of Obama. Look at the memes from groups like Occupy Democrats making fun of Trump. Look at the posts on Pantsuit Nation with people in fear of Trump. As you read memes from our progressive groups, ask yourself if they are the same types of memes you might be seeing from the Conservative side against Obama or Hillary. Hell, you’re still seeing them from that side against Hillary.

An aside to any Conservative reading this: We’ve given up on Hillary; you should too, and let her fade back into the historical record.

We are better than that. I like to think that liberals and progressives are well educated and critical thinkers (which is why we’re liberals and progressives). I like to think that we have in-depth knowledge of the issues; that we take the time to learn the nuances and complications before we tweet. We shouldn’t need to sink to sophomoric name calling, fat shaming, slut shaming, ad hominem attacks, and all the other silliness that I see.

The issues in the upcoming elections are critical not only to our nation, but to the world. They are complicated issues — health care, climate change, treatment of women and minorities, religious freedom, equality, economic class warfare, and much more. I like to believe we have the better positions. I like to believe that we can represent and discussion those positions, and win based on the strength of our arguments — even in the face of conspiracy theorists. Certainly, in a fact based discussion, we can demolish Trump’s position and expose them for what they really are, and who they do and do not benefit.

If our platform for 2018 and beyond is simply hatred of Donald Trump, we’ve lost. We’ve let partisanship eclipse our intelligence and common sense. Let’s win the upcoming election season not by dropping down to the level of hatred, but by rising up to the level of intelligent political discourse where we take the time to listen to the other side, and use our intelligence and critical thinking to refute their arguments and to convince them of the correctness of our positions.

Hatred never wins. Well, except when you manipulate the electoral college and district boundaries.

7 Replies to “A Lunchtime Rant: Ohm on the Range”