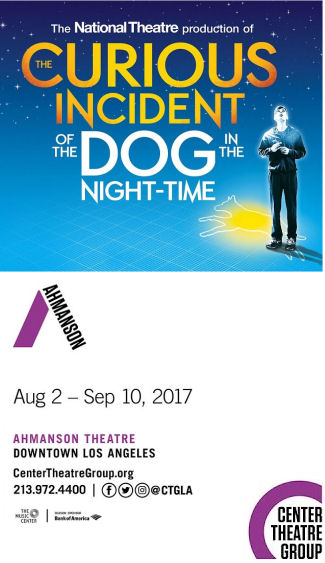 A little over 10 years ago, I picked up a fascinating book, The Curious Incident of the Dog in the Night-Time by Mark Haddon (FB). The book told the story of a murder mystery — a dog that had been found in a neighbor’s front yard, killed by a pitchfork. What was the fascinating conceit of the book was that the story was told from the point of view of the next-door neightbor, a 15 year old teen somewhere on the Asperger/Autism scale, who found the dead dog. With the help of his teacher, Siobahn, the boy writes the story of his investigation — including all his personality quirks, such as chapters numbered as primes and so forth. Along the way to solving the investigation, he discovers hidden truths about his family, and hidden strength within himself.

The book was a truly odd presentation of a story, and really gave insight to readers about what it might be like living as an Aspie-boy, and what parenting one involved. The odd nature of the story — with digressions, tantrums, and quirks was almost non-linear at times, but it drew you in and held you rapt.

For me, it truly made me appreciate Haddon as an author (as I had Gregory Maguire of Wicked before him), and I went out and devoured Haddon’s other books as soon as they hit trade paperbacks.

When I heard that Simon Stephens and the National Theatre (FB) were developing a play based on the novel, I found it difficult to conceive of how such as odd book could be transformed for the stage in a manner that preserved its uniqueness. How does one put the mind of an Aspie on stage? Yet somehow they did, and the production came to Broadway, and then went on to win 5 Tony Awards, including Best Play.

Last night, we saw the play at the Ahmanson Theatre (FB), and all I can say is (paraphrasing Steve Stanley, as I believe he has the phrase trademarked): Wow!. They did it. They captures the confusion and the noise and the order and the chaos and the methodicity and the emotional lack of emotion of the Aspie mind. This was done by the interplay of having the teacher, Siobahn, of the boy, Christopher, serve as the narrator. This was done by the use of a black box stage and animations, through the use of color, and through the use of the ensemble as interchangeable people that moved throughout Christopher’s life. This was just not economy of hiring actors; it captured the fact that Aspies often find it different to identify differences in people. It was done through the performances of the actors, the choreography of movement throughout the piece, the dissonant sounds.

I recently heard a discussion about the role of a director in a stage production, which intrigued me as I’ve always had difficulty distinguishing between what the director brings and what the actor brings. The discussion pointed out that the actor brings the individual portrayal, based on their experience and research, to the character; the director brings the whole together. The overall conception, the synthesis of creatives, and the interaction of the actors with one another and with the environment created by the production creative team (set, props, lights, sound). If that is indeed the case, then Curious Incident is indeed a director’s play, with vision of the director, Marianne Elliott, providing unified environment around Christopher’s behavior, demonstrating and illustrating the larger picture that surrounds his mind, and giving reality to the truth that he speaks.

That’s not to diminish the work of the actors. As Christopher, Adam Langdon (FB)†, captures the Aspie behavior well (although I should note  that the play never states a particular diagnosis). This includes all the quirks from the behavior when touched to the focus on something else while having a discussion, to the lack of emotion in speech and action, to the fear and panic. It is a tour de force,  a powerful performance and portrayal.
† [Benjamin Wheelwright (FB) at weekend matinee performances]

All of the other actors serve as members of the ensemble as well as their principle roles. Three, however, have only one other role besides the ensemble: Maria Elena Ramirez (FB) as Siobhan — Christopher’s teacher, Gene Gillette (FB) as Ed — Christopher’s father, and Felicity Jones Latta (FB) as Judy — Christopher’s mother.  Ramirez captured well the gentle guiding force that was Siobahn — a teacher, a confidant, a source of strength. She also served as narrator, describing things that Christopher couldn’t and effectively bringing the book to the stage. Gillette’s Ed was initially gruff and inscrutable, but as the play progressed you got to see the deep depth of affection and care and concern he had for Christopher. Lastly, Latta’s Judy came into the story length and was, for much of the story, an enigma. By the end, you could see that she initially didn’t know how to handle and deal with a child like Christopher, and this led to her — shall we say “predicament” — that drove the story. By the end, however, you could see that she was getting more comfortable with her role as mother.

Turning to the creative and production team: Bunny Christie‘s scenic and costume design was ingenious (well, the scenic design was — costumes were closer to everyday clothes). She created a black box with a graph-paper grid with LEDs at the nexii, and a series of white boxes. Everything came through doors in the box. This combined with Finn Ross‘s video design to create both the outside world and the world of Christopher’s mind. Added to that was the lighting design of Paule Constable that took the projections out into the audience to heighten emotion and set move, and the choreography of Scott Graham (FB) and Steven Hoggett (FB) to create the frantic movement that also served to establish both mood and emotion. Lastly, all this worked with the sound design of Ian Dickinson for Autograph and Adrian Sutton (FB)’s music to move the audience from order to cacaphony as appropriate. Other technical and production credits: David Brian Brown (FB) [Wig and Hair Design]; Ben Furey (FB) [Voice and Dialect Coach]; Daniel Swee and Cindy Tolan (FB) [Casting]; Benjamin Endsley Klein (FB) [Associate Director]; Taylor Haven Holt (FB) [Assistant Director]; Yasmine Lee (FB) and Jess Williams [Associate Choreographers]; C. Randall White [Production Stage Manager]; Lynn R. Camilo (FB) and Kristin Newhouse (FB) [Stage Managers]; Elizabeth M. Talmadge [Company Manager]; Bond Theatrical Group [Marketing and Publicity Direction]; Aurora Productions [Production Management]; The Booking Group (FB) [Tour Booking]; Bespoke Theatricals [General Manager].

The Curious Incident of the Dog in the Night-Time continues at the Ahmanson Theatre (FB) through September 10. Tickets are available through the Ahmanson Box Office; discount tickets may be available through Goldstar. If you want an interesting show — either from the Aspie/Autism angle or just the mystery angle — this is well worth seeing.

August theatre starts with The Curious Incident of the Dog in the Night at the Ahmanson Theatre (FB) on the weekend. We are also squeezing in On The Twentieth Century at the Pan-Andreas Theatre in Hollywood from Proof Doubt Closer (FB), as a friend is in the cast. The second weekend of August? What made sitting through The Bodyguard worth it: Hamilton at the Hollywood Pantages (FB).

I’m still scheduling September, but so far we have only The 39 Steps° at Actors Co-op (FB). There’s also the Men of TAS Golf Tournament, if any theatre company reading this wants to donate tickets to our silent auction (hint, hint). October is also filling up quickly, with Joseph and the Amazing Technicolor Dreamcoat at Cabrillo Music Theatre (FB), the Upright Citizens Brigade (UCB) at the Valley Performing Arts Center (FB), a tribute to Ray Charles — To Ray With Love — also at the Valley Performing Arts Center (FB), and Bright Star at the Ahmanson Theatre (FB). Lastly, looking into November, we have The Man Who Came to Dinner at Actors Co-op (FB), the Nottingham (FB) and Tumbleweed (FB) Festivals, a Day Out with Thomas at Orange Empire Railway Museum (FB), Spamilton at the Kirk Douglas Theatre (FB) and Something Rotten at the Ahmanson Theatre (FB). December brings ACSAC 2017 in San Juan PR, the Colburn Orchestra and the Klezmatics at the Valley Performing Arts Center (FB),   Pacific Overtures at Chromolume Theatre (FB), and our Christmas Day movie. More as the schedule fleshes out, of course, but we’re booking all the way out in mid to late 2018 already!