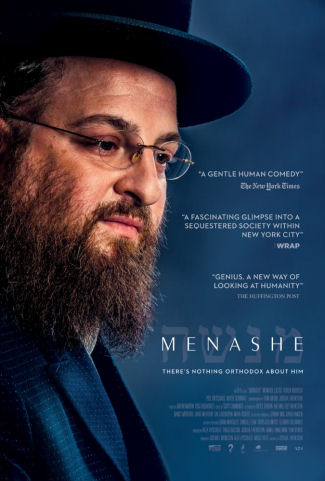 If you don’t know it by now, my daughter is a Yiddish scholar. Seriously. She’s about to head out to UW-Madison to get an MS and PhD in History, specializing in the Yiddish culture of Southern California. My wife, wanting to keep up with her, signed up for a Yiddish Class through American Jewish University (FB). As part of that class, we all (that is, my wife and daughter, myself, and my cousin and her daughter (who is now staying with us)) went to Beverly Hills to see the West Coast Premiere of Menashe, a movie shown in Yiddish with English subtitles, which was being shown as part of the Los Angeles Jewish Film Festival (FB).

Menashe is an extremely interesting movie. It tells the fictionalized-but-based-on-fact story of Menashe Lustig, a man in an extremely insular Chasidic community in New York whose wife died almost a year ago. The strictures of the community require that the children be raised in a two-parent household. As a result, Menashe’s only son has been sent to live with his uncle and his wife, something Menashe doesn’t like. The film is the story of Menashe trying to get his son to live with him, and the various trials and tribulations involved. These are not only religious issues, but financial ones as the community is extremely poor.

The film itself was an interesting view into a community that one would never normally see. The actors in the film were mostly people who had left the community, and supposedly their portrayal (other than the variety of Yiddish dialects) was pretty spot on. I found the language to be more a poetic background to the subtitles; it enhanced the authenticity of the story being told (as if you were the fly on the wall, or the worm in the lettuce).  At times the pace dragged a bit (but not as bad as the recent Jackie), but on the whole it was a very interesting film. It explored the issue from the viewpoint of someone who wanted to remain in the community, as opposed to someone who felt the only way to deal with the community issues was to escape it (something I recall seeing in another recent film about the Chasidic community, which I can’t recall the name of right now).