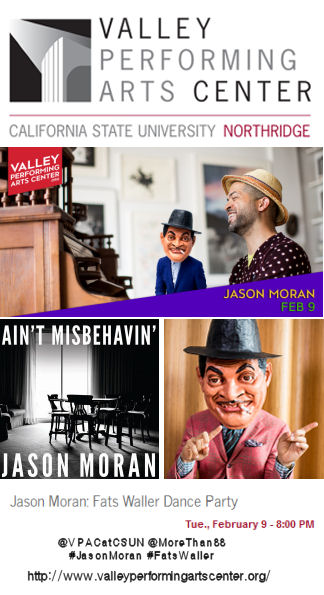 I fell in love with Fats Waller and his rhythm when I saw Ain’t Misbehavin’ at the Aquarius Theatre back in the late 1970s. That syncopated rhythm. That swingin’ sound. It was just fun, infectious music.

So, when I saw that one of the shows we could get was a tribute to Fats, I booked tickets for it. The show was called “Jason Moran: Fats Waller Dance Party“. I was expecting some modern takes on Fats Waller.

I should have read the description closer:

The Washington Post wrote of Moran’s Fats Waller Dance Party shows, “the band largely reshapes Waller’s tunes for a hip-hop ear — often by seizing on hidden beats or fleeting riffs from the original recordings and turning them into the foundation for new renditions. That happens some on the record, but things go in more varied directions, too.”

Actually, what Jason Moran (FB) and his band did was attempt to find the rhythm in the music, and completely lose the melody and the syncopation that made Fats Waller’s music special.

During the show, I made various notes. I characterized the music as “Funkifed Waller”, or “Waller Without”. I’ll note that it wasn’t just me. My taste in jazz goes more to the Big Band sound, the New Orleans sound, or the Gordin Goodwin Big Phat sound (Goodwin is a CSUN boy, having recorded with the CSUN Jazz Ensemble in the 1970s). My wife, on the other hand? Her taste goes a bit more to the modern stuff, ala Bradford or Wynton Marsalis. But even she found this stuff way too far out.

The performance was also plagued by sound problems that could have been corrected had the sound designer done their job. The drums were too loud, drowning out the singer. The singer’s sound was muddied and way under-miked, to the point that one could often see that she was singing, but not hear her. Moran attempted to talk to the audience from inside a paper mache Fats Waller head, which made him unintelligible.  All this in a hall with some of the best acoustics in town.

I’ll note that this is a YMMV — there were clearly folks enjoying the music and dancing in the mosh pit. More power to them; I’m glad they did. This show just wasn’t our style.

Ob. Disclaimer: I am not a trained theatre (or music) critic; I am, however, a regular theatre audience member. I’ve been attending live theatre and concerts in Los Angeles since 1972; I’ve been writing up my thoughts on theatre (and the shows I see) since 2004. I do not have theatre training (I’m a computer security specialist), but have learned a lot about theatre over my many years of attending theatre and talking to talented professionals. I pay for all my tickets unless otherwise noted. I am not compensated by anyone for doing these writeups in any way, shape, or form. I subscribe at three theatres:  The Colony Theatre (FB), Cabrillo Music Theatre (FB), and I just added the  Hollywood Pantages (FB). In 2015, my intimate theatre subscription was at REP East (FB), although they are reorganizing and (per the birdies) will not start 2016 shows until August. Additionally, the Colony just announced that the remainder of their season has been cancelled, so the status of that subscription is up in the air. Through my theatre attendance I have made friends with cast, crew, and producers, but I do strive to not let those relationships color my writing (with one exception: when writing up children’s production, I focus on the positive — one gains nothing except bad karma by raking a child over the coals).  I believe in telling you about the shows I see to help you form your opinion; it is up to you to determine the weight you give my writeups.

Upcoming Shows: Next weekend brings the Southern California premiere of the musical Dogfight at the Chance Theatre (FB) in Anaheim Hills on February 14.  The third weekend in February brings “Prez” at the Chromolume Theatre (FB) on February 20, and “String/Awakening” from Muse/ique (FB) on February 21. February closes with The Band of the Royal Marines and the Pipes, Drums, and Highland Dancers of the Scots Guards at the Valley Performing Arts Center (VPAC) (FB). March starts with “Man Covets Bird” at the 24th Street Theatre (FB) on March 6 (the day after the MRJ Man of the Year dinner) The second weekend of March is open, thanks to the cancellation of “Another Roll of the Dice” at The Colony Theatre (FB); I’m thinking possibly of Hollywould at The Hudson Theatre (FB). The third weekend of March takes us back to the Pasadena Playhouse (FB) on March 19 to see Harvey Fierstein’s Casa Valentina, followed by Bach at Leipzig at The Group Rep (FB) on March 20.  The last weekend of March is being held for “A Gentleman’s Guide to Love and Murder” at the Ahmanson Theatre (FB) (pending Hottix).  April will start with Lea Salonga at the Valley Performing Arts Center (VPAC) (FB) on April 1 and an Elaine Boosler concert at Temple Ahavat Shalom on April 2. It will also bring the Turtle Quintet at the Valley Performing Arts Center (VPAC) (FB), “Children of Eden” at Cabrillo Music Theatre (FB) , and our annual visit to the Renaissance Faire (Southern). April may also bring A Shred of Evidence at Theatre 40 (FB). As always, I’m keeping my eyes open for interesting productions mentioned on sites such as Bitter-Lemons, and Musicals in LA, as well as productions I see on Goldstar, LA Stage Tix, Plays411 or that are sent to me by publicists or the venues themselves.