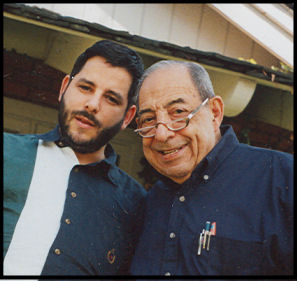 My father died yesterday. You can find the details in the blog from the automobile accident (see grandpa_a); that’s not the purpose of this post.

My father died yesterday. And I’ll miss him. This is a remembrance post, for me to let you know who he was, and to preserve it.

My father was born in Flushing NY in 1922. He was the eldest of four brothers; the son of a tailor who lived over his shop. I can’t give you too many details of the early days; Uncle Herbert can (and perhaps he will reply to this post and do so). His mother died young, when he was in his twenties, and sometime thereafter, his family moved to Los Angeles (how’s that for glossing over details). My dad went to Southwestern School of Accounting, and was a Public Accountant. He married his first wife in the late 1940s, and my brother was born in 1952. He loved my brother very, very much. He divorced that wife in 1955, and retained custody of my brother. He married my mother in 1956, and I was born in 1960. My mother was a CPA, so they formed an accounting company of their own, Faigin and Faigin. My brother died, reported due to an accident (I never knew the true details) in 1970. It devistated both my parents. My mother died in 1990 on my wedding anniversary. My father remarried a year or so later to Rae, who had lost her husband. This brought me some new wonderful family members. This should bring you up to date on the familial backstory.

So, who was my dad, and what do I remember. This is a jagged collection of memories.

I remember being in Indian Guides with him, painting rocks and bark to invite people to meetings. I remember going on Indian Guide campouts with him. It is because of this that I did Indian Princesses with my daughter, continuing the tradition. I recommend this program to anyone who is a dad.

I remember going on trips with him to East Los Angeles, to visit his clients. We would hit small mom and pop grocery stores, mexican candy companies. I’d always get sweets… and get to sort the paid bills afterwards.

I remember him taking the time to be with me.

I remember him telling bad jokes, and being enamored with old-time radio stars, such as Al Jolsen (his favorite), Eddie Cantor, Jack Benny, and so on.

I remember his teeth. Specifically, I remember how he would remove his dentures just to gross out us kids.

I remember him taking me to the Dorothy Chandler Pavillion to see musicals, starting in 1972 when my mother was too sick to attend The Rothschilds. From this came my love of musicals.

I remember him reading Robert W. Service to me, especially Bessies Boil.

I remember him, at the Passover Seder, reading the Four Sons. He loved to act, mug, and play with his voice to make a point during the story.

I remember him being active in the Masons and the Shriners, especially with his good friend, Raymond Schwartz. I remember him going to the Masonic Picnics.

I remember him playing bridge with my mom and their friends, the Cohens, the Schwartzes, and the Strausses. Perhaps this is where I got my love of gaming.

I remember him telling stories of his time in the Navy, when he was a pharmacists mate, 2nd class, at Camp Elliott, which is now part of Mirimar NAS in San Diego. He found it ironic that he was in the Navy, as he could never swim.

I remember his disorganized toolbench, where eventually you could find what you need. I still have his 30 year old power drill, which I still use today.

I remember him taking care of my mother as she died of cancer, and fiercly defending her when we would fight.

In his later years, I remember him fighting with the computer, and eventually learning to use it and to use Email. However, he could never quite get the printer figured out. I would get calls from him that stuff wasn’t printing, and it was because he had been playing with the printer queue again.

I remember him cooking. He loved to cook peppers and onions in olive oil. He made a mean spaghetti sauce, and a great pot roast in tomatoe sauce. Rae says that I got my cooking skills from him, with which I must agree, as I don’t think my mom could cook.

I remember him collecting autographs and first day covers. For many, he would frame them and put them all over the walls.

I remember his love of baseball, which never rubbed off.

I remember him loving fountain pens, just like me. He had boxes of pens, and even more ink. He’s the only man I know that has a quart bottle of Schaeffer Black Quink Ink in his supply closet. There are about 6 bottles of ink on his desk (I only have 3).

I remember him being a luddite when it comes to computerizing financies. I’m going to have loads of two-peg journal books to go through to figure out stocks and bank accounts.

I remember him being a good friend and caring about other people. After my mother died and he remarried, his new wife’s children were treated the same as his natural children, with the same love. He was a second grandfather to my sister-in-law’s children. He was there when people needed him. Until his last year, he volunteered to help seniors with their taxes.

For many years, I remember him being a staunch Republican, going counter to my mother, the strong liberal. I remember him backing Nixon and Reagan. This year, however, had he been strong enough, he was going to vote for John Kerry.

I remember him being a people person. He would just light up when he was around people, especially those that hadn’t heard his stories before.

I remember him being there for me and my family. We spoke weekly on the phone, something I will miss, talking about everything. He had good advice, which I grew to respect as I got older. To the youngsters reading this: listen to your parents. They’ve been their and made the same mistakes. They do know what they are talking about.

I remember his love for his granddaughter, “Small and Feisty”. He had pictures of her everywhere, and she loved him. I remember him taking her to Disneyland when she was three, and being there in the hospital when she had her open heart surgery at the age of four.

I remember his love for his family. He enjoyed spending time with his brothers, Herbert, Ronald, and Tom, and researching family history. When my daughter was little, we picked up a copy of Grandfather Remembers and gave it to him. He filled it out, and now it is a lasting memory for her of her grandfather. To those of you who are grandparents: take the time now to write out your memories for your grandchildren. Record an oral history. Annotate your photo albums. It is worth the time. You will create that memory that will outlive you.

I remember how he loved Yiddish and Yiddish stories. I remember him reading the Freiheit. Recently, the PRI program The World had a report on a Klezmer version of Peter and the Wolf called Pinchus and the Pig, narrated by Maurice Sendak. He would have loved it.

I remember how he loved his wives (OK, I don’t remember anything about his first wife, Jean). I remember how he loved my mother, Nancy, even through the depths of her depression, her anger, her rages, her illnesses. I remember how he rarely lost his temper (and when he did, you needed to worry). I remember when he first told me he had met Rae, and how they quickly grew to love each other. Even though there was an age difference there, I saw the deep affection that existed between them. Through this recent illness, I’ve gotten to know Rae very well, and she has moved from being “my father’s wife” to “my stepmother”. He chose well.

I remember how he touched people. A few months ago, I went to a funeral that was packed to the gills of people who loved the deceased. My father had friends all over the world, and helped many people.

In short, I remember a deeply caring man, who I really think was responsible for making me the way I am today (both for good and for bad). He does live on in me, and I think he lives on in my daughter as well. As long as we remember someone, they never die. My daughter, talking to me last night, said (paraphrased) “Dad, don’t worry. Your daddy’s soul will be reborn in someone else… and that person will be a very lucky person.”

Home again and the streets are not much cleaner
And the quaint old south side scenery
Is quaint no more
Just older than before
Go up the stairs and down the hallway
To my daddy’s door
Your son is home, Dad, and he’s found a girl
And she’s the greatest girl in all the world
I think you’ll like her, Dad, I hope you do
But if you don’t that’s alright, too
What’s new? Do you still work at the drugstore?
Is that true? Still polishing the same floor?
I missed my good old Dad
My but I’m glad to see you
[…]
So long Dad
(Randy Newman)