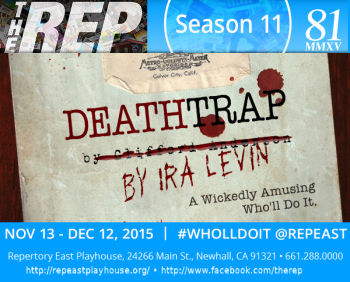 Back when I was in college, there was some homegrown text adventure game (neither “Zork” nor “Advent”) that I used to play. I always wanted to have that game have an elevator that could could find. The doors would open, and it would say, “There is a sign saying “You are on Level 3″, a keyboard mounted into the wall, and a door.”. You could then walk up to that keyboard, enter your door password, and go into the graduate terminal room. You could then log in, and thus get a real system shell.

This was a very “meta” concept: You could go into the game, walk into a terminal room, and log into a fresh instance of the game. It was self-descriptive, self-referential. In fact, in its adjectival form, “meta” is defined as something that refers to to itself or to the conventions of its genre — that is, something self-referential.  A good example would be someone writing a book about writing the book that is being written about writing a book.

Or, for another example, what about a murder mystery called “Deathtrap”, that starts out with a famous but writer-blocked playwright receiving a play from a student, called “Deathtrap”, a comedic whodunnit in 2 acts, 6 scenes, with only 5 characters, set in a Connecticut city. A play so good that the playwright wonders if he could entice the student to come to work with him, and then kill him and publish the play as his own. That, in fact, is the starting premise of the very clever whodunnit “Deathtrap”, by Ira Levin (of “Rosemary’s Baby” fame), that we saw last night at Repertory East Playhouse (“the REP”) (FB).

“Deathtrap” is about… well, I don’t want to spoil the surprises in the story, so suffice it to say that “Deathtrap” is about the writing of the comedic thriller “Deathtrap”. It is a one set, two act, five actor, six scene play. It has the distinction of being the longest running comedy-thriller on Broadway. Although I can’t tell you the plot (if you really want to know, there is always “Wikipedia”), I can tell you the players: Sidney Bruhl, a successful Broadway playwright whose specialty is thrillers, currently suffering from writers blog; Myra Bruhl, his beautiful and wealthy wife; Clifford Anderson, a student of Bruhl’s who has mailed him a carbon-copy of a one-set, two-act, five-character thriller called “Deathtrap”; Helga Ten Dorp, a Swedish author with ESP who helps the police solve crimes and who is on vacation in the area; and Porter Milgrim, the Bruhl family lawyer.

Director Mark Kaplan (FB) (assisted by Kimbyrly M. Valis (FB)) has executed the production well (one might say he did a “killer job”) with the production. I was mostly unfamiliar with the show — I think I’ve seen the movie version years ago, and all I had remembered is that an affable Chistopher Reeve was in the cast. Kaplan did a great job of not telegraphic what was to come through the behavior of the actors themselves, and kept the pacing and movement realistic and crisp. Although, as is said in the opening scene about this play, even “A gifted director couldn’t even hurt it.”

In the lead position was Derrel Maury (FB) as Sidney Bruhl. Maury created a believable playwright, seemingly friendly and creative. He gave off the aura of someone who had been writing for years. His student / mentee, Clifford Anderson, was played by Curtis Crawford/FB. Crawford, again, brought a youthful believability to the character. Reading the bios of both of these men, I believe it is because each is similar to their characters. Not speaking to whether they are capable of murder, but with respect to theatrical experience. Maury, like Bruhl, has been working in the theatre for a long time, joining SAG/AFTRA in 1967 and working onstage since the age of 12. Crawford is really a newcomer, currently studying acting at USC with only a few roles — including REP’s recent The Diviners — on his resume.

Supporting these characters were Kimberly Patterson (FB) as Myra Bruhl, Sidney’s wife; Georgan George (FB) as Helga Ten Dorp, the neighboring author with ESP; and Barry Agin (FB) as Porter Milgrim, Sidney’s lawyer. The lovely Patterson was great as Myra — realistic in her actions, and just a delight to watch. George provided some great comic relief with her movements. It is hard to call anyone portraying ESP as realistic, but George did a great job of making the character fun to watch and enjoyable offstage. Agin had a much smaller role, but worked well in the scenes that he was in.

In fact, my only comments on the show were truly at the level of nits — all easily corrected. For example, only I would notice that when Sydney called Clifford the first time, he dialed 8 digits. In those days, he would have either dialed 7 digits (555-1212) or 11 digits (1-203-555-1212); I also notice that Sydney forgot to zip his fly for the first act (which, admittedly, is something hard to correct in character while onstage once you realize it). Another in our party noted that Clifford was doing carriage return on the typewriter wrong, and that an accent was slightly off for the area. As I said: nits. None of these are significant problems that hindered enjoyment, and only an obsessive compulsive like me would pick up on them.

Turning to the production and technical side: The scenic and prop design was by artistic director of REP, Mikee Schwinn (FB). Mikee indicated that he was working on the set up until the night before opening. I’m pleased to say that the set doesn’t look like it; in fact, the set looks like the excellent sets REP had in the days of Jeff Hyde — and it is a wonderful demonstration of how Mikee is steering REP in the right direction after a rocky year. Sound design was by the always effective Steven “Nanook” Burkholder (FB). Lighting design was by Jeffrey Hampton, who I see is now listed as the REP’s Resident Lighting Designer. Congratulations, Jeff, for restoring the balance of “Jeff” in the Resident Production Artists of the REP.  Costume design was by Cory Logston (FB), and was believable. Laurie Morgan/FB was the production stage manager, assisted by Reed-Ashley Matheson/FB. REP is under the artistic direction of Mikee Schwinn (FB).

“Deathtrap” continues at Repertory East Playhouse (“the REP”) (FB) through December 12. It is an excellent production and well worth seeing. REP has moved to Vendini for ticketing, and the new ticketing website allows you to select your own seats. Tickets may also be available on Goldstar.

Normally, this would be the time and space where I would announce the REP 2016 season. Alas, it hasn’t been announced — or even leaked — to me yet. I spent sometime last night talking to Mikee about where REP is moving in 2016, and I’m excited about the plans we discussed. I don’t want to spoil the details about Mikee’s announcements, but suffice it to say there are plans in the work for greater use of the Playhouse, a return to REP as the flagship professional theatre for actors in the northern San Fernando Valley/Santa Clarita area, and an extremely busy production schedule that will broaden the opportunities for audiences and theatre lovers. I should also note, in the spirit of “full disclosure”, that Mikee has asked me to be on the advisory board of REP. In that capacity, I plan to advise in the same manner I do at work: with a focus on unbiased advice that results in mission success.

An Afternoon Note. Before we went to the REP, we were at Archway Studio Theatre (FB) for a student performance of Dracula.  I’m not doing a full review of the show here for a number of reasons (including the fact that there was no program listing all the names) — and, another “full disclosure” — my niece and nephew were in the cast. I’ll note that the kids did a very good job, especially given extremely limited rehearsal time and the fact that they had never worked with the props before. In the short time before the show, I got to see how the director, Steven Sabel (FB) worked on staging and blocking the students. After the show was a very interesting workshop, where the student actors got to play their roles against the adult actors doing the same show. It was an interesting contrast, and I’m sure it informed the students by seeing how the trained actors came at their roles. As for the student performances: in general, they were good. My only advice might be to remember to project a bit more (some had it down, some didn’t), and remember to slow down when speaking (a common problem I’ve seen at Science Festivals with students that are nervous). But I think the notion of getting kids up on stage is a great one — it provides self confidence, it improves speaking abilities, and it allows exploration of emotions and feelings in a safe environment. Archway’s adult production of Dracula (tickets also available on Goldstar) looks interesting. It has one more weekend of performances.

Upcoming Shows: Next weekend I’m on my own. I picked up a postcard for “Timeshare”  at Eclectic Theatre Company (FB) while at the Colony for Best of Enemies, and it sounded so interesting I booked a ticket for November 21. The last weekend of November sees us back at Zombie Joes Underground (FB) for the intriguingly-titled “The Jew That Saved Christmas“. December starts with High School Musical at Nobel Middle School (FB) (running December 1-4), followed by “El Grande Circus de Coca-Cola” at The Colony Theatre (FB) on December 5. During the week I become a producer, when we present The Nigerian Spam Scam Scam as the dinner entertainment at the Annual Computer Security Applications Conference (ACSAC). The weekend after the conference is open. The third weekend of December brings the touring company of “If/Then” at the Pantages (FB). The last weekend of December is held for “The Bridges of Madison County” at the Ahmanson Theatre (FB). I’m just starting to plan 2016 — I’ve been waiting on the REP schedule. So far, January shows “Bullets Over Broadway” at the Pantages (FB) on January 9, and “A Funny Thing Happened on the Way to the Forum” at Cabrillo Music Theatre (FB) on January 30. There is currently nothing on the schedule for February. As always, I’m keeping my eyes open for interesting productions mentioned on sites such as Bitter-Lemons, and Musicals in LA, as well as productions I see on Goldstar, LA Stage Tix, Plays411 or that are sent to me by publicists or the venues themselves.