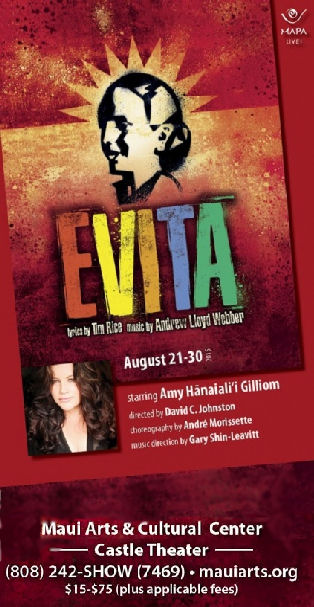 Just because we are on vacation doesn’t mean the theatre stops. When I’m on vacation, I typically try to see at least one local show. When I confirmed we were going to Maui, I started looking for what live shows would be here while we were here. The only one in our window was Evita (FB), a Maui Academy of the Performing Arts (MAPA) (FB) production at the Maui Arts and Cultural Center (MACC) (FB), which we saw last night. The BLUF (Bottom Line Up Front) assessment is that it was a very good production for community theatre, and quite enjoyable with only a few quibbles. As an aside, I’ll note that there appears to be a fair amount of theatre on Maui, including a regular fringe festival. Who knew?

We last saw Evita in a high-school performance at Van Nuys HS back in 2011. That was my wife’s first exposure to the show; I had seen the original when it was at the Shubert Theatre in Century City back when both existed back in 1980. For those not familiar with Evita, it is the second rock opera written by Andrew Lloyd Webber and Tim Rice. It concentrates on the life of Argentine political leader Eva Perón, the second wife of Argentinian president Juan Perón. The story follows Evita’s early life, rise to power, charity work, and eventual death. It is a sung-through opera, with very little non-musical spoken dialogue. You can find a detailed synopsis of the story on the wikipedia page or on the Rice/Webber page for the show.

This production of Evita was put on by the Maui Academy of the Performing Arts (MAPA) (FB) , the third annual Broadway-style production from the 35 year old arts organization (they did Miss Saigon in 2014 and Les Miserables in 2013). As you can tell from the choice of shows, they like shows with large casts (presumably, to get large community involvement). This show was no exception, with 49 people in the ensemble, 10 additional tango dancers, 13 children in the children’s chorus.

The show was directed by David C. Johnston (FB), MAPA’s artistic director, with Choreography by André Morissette (FB) and staging by David C. Johnston (FB) and André Morissette (FB).  They made some interesting choices in the casting, movement, and staging departments — not necessarily bad choices, but ones that drew my attention. The first was in the casting. If you think about Evita and the typical casting, what comes to mind? A pencil-thin Eva Perón, a relatively thin army-officer type for Juan Perón, and a tall and thin Tango dancer for Agustin Magaldi. Their choices — talented all — were a bit more on the mid-size scale. This didn’t hurt the performances one bit (and I’m sure most of the audience didn’t notice), but it did give a different look to the show. You can see what I mean in the photos accompanying the cast credits below.  I actually enjoyed the casting, and it may have been more reflective of the Argentinian society of the time (size norms have changed over time, and what might be the image in my mind might reflect more the norms of the 1980s when this show came out, vs. the Latin American norms of 1930-1940 Argentina).

The second and third issues were more movement based. The director tended to have his actors use their arms quite a bit during songs (you likely know what a mean — the tendancy to sweep one’s arms in front of oneself as one sings to punctuate everything). This got to the point where it was a little visually distracting — again, it didn’t detract from the overall performance but was a directorial choice that was bothersome. The third issue was the overall movement of the ensemble, which was a bit more simplistic than I’m used to seeing on shows such as this in Los Angeles. My guess is that this was a combination of the extremely large ensemble and the fact that the ensemble was not built from professional dancers and gypsies, but from community members. Given that, the choreography was very good; it was just not all it could have been given what I’m used to seeing. It was great for the community theatre level, and — again — I’m sure most of the audience did not notice. I’m just used to community theatre at the level that challenges the professionals (look at the work of Cabrillo Music Theatre (FB)).

In the overall scheme of things, however, those are minor quibbles. The basic performance and staging went well, with a set that consisted primarily of moving stairways and balconies, a few drop columns, and some basic props. With this simplicity, there was a strong need for the acting to establish not only story but place and time — and it did that well. The show was overall enjoyable with some very good performances. Let’s now look at those performances.

In the lead position as Eva Perón was Hawai’i’s top selling vocalist of all times (and a product of the early days of MAPA), Amy Hānaili’i Gilliom (FB). She had the perfect vocals for the role and captured the emotional performance quite well. The staging had a few odd costume changes on stage for Ms. Gilliom that were much more noticeable from the balcony (where we were sitting), but she looked beautiful in the costumes and gave a great performance. I’ll note that MAPA chose the staging that incorporated the song “You Must Love Me” from the movie, and Gilliom handled that song beautifully.

Eva’s antagonist, Che, is never mentioned by name during the show, but serves as a sardonic off-side commentator on the proceedings to provide the necessary cynical look on the situation. If you’re familiar with the concept album, you always see him as pushing his insecticide (a plot element that disappeared in the stage transition, leaving a number of musical moments where the words have been removed from the remaining music. Che was performed by Kepa Cabanilla-Aricayos/FB. He brought a much higher voice to the character (as if Patinkin wasn’t high), but worked well. The only oddity was that in a number of scenes he was part of the crowd seemingly supporting Perón; I would have expected him to be more off on the side observing instead. I’m guessing this was a directorial choice, and not a major problem. In general, I expected a strong sardonic and angry nature from the performance — this was particularly noticeable in “Goodnight and Thank You”.

Juan Perón was portrayed by Francis Tau’a/FB. Tau’a had a lovely voice for Perón and brought an appropriate stage presence, including a very touching performance in the second act.

The remaining two named characters were Danielle Dalaunay (FB) as Perón’s mistress, and Joey Schumacher/FB as Agustin Magaldi. Dalaunay (hint: don’t do a Google search on the name; unfortunately an adult industry actress also chose that name) really only has one scene and one song, but she nailed it and gave a lovely and touching rendition of “Where Am I Going To?”. Schumacher’s gave a wonderful vocal performance as Magaldi, but didn’t have the look of a tango singer that would have the teenage girls swooning.

Turning to the technical side. The set design by Dan Hays/FB was relative simple: two movable staircases, a movable balcony, and a static balcony. Simple, but effective, as they were constantly being reconfigured. These were supported by the props by Jeff Robidoux and Barbara Sedano (FB), which worked reasonably well. My only quibble was with the Argentinian flag, which was often portrayed without the sunburst. Now, it turns out that the sunburst-less version of the flag is the ornamental flag and thus a valid version. Still, I’m not sure if that was the right flag to use. The sound design by Joseph “Joe” Arias  was reasonable, but could stand for a little adjusting (some mics were problematic, and some needed their volume increased). The lighting design by Mark Astrella served to create the mood appropriately. The costumes by Vanessa Cerrito (FB) (Kenneth Peter Lee for Eva Peron) seemed appropriately period, as did the hair, wig, and make-up design by Marc Tolliver/FB and Karli Rose/FB.  André Morissette (FB)  was the costume consultant. Lina Krueger/FB was the stage manager, assisted by Tina Kailiponi/FB. Evita was produced by the Maui Academy of the Performing Arts (MAPA) (FB).

The last performance of Evita at the Maui Arts and Cultural Center (MACC) (FB) is a few hours away, at 2:00 PM HST. Tickets are available through the MACC website, but at this point I’d call the box office. We forewarned: Hurricane Ignacio, as the time I’m writing this, is a Category 4 Hurricane about 400 mi E of the island of Hawaii, with a storm track that has it running to the north and west of the islands. We’re getting wind and some rain here on the north western side of Maui; MACC is in Kahului, on the eastern side of the island (which will have more storms and winds). The show is worth seeing, but stay safe.

Upcoming Shows: September starts with Tom Paxton’s last concert at McCabes (FB) on September 12, followed by “The Diviners” at REP East (FB) and “First Date” at The La Mirada Theatre for the Performing Arts (FB). October will bring another Fringe Festival: the NoHo Fringe Festival (FB). They haven’t put up the Fringe shows yet, so I may start booking weekends. October also has the following as ticketed or hold-the-dates: CSUN’s Urinetown (end of October – 10/30 or 11/1);  “The Best of Enemies” at The Colony Theatre (FB) (Ticketed for Sat 10/10); and  “Damn Yankees” at Cabrillo Music Theatre (FB) (Ticketed for Sat 10/17). November will bring the Nottingham Festival (FB) on November 7; “A Day Out with Thomas” at Orange Empire Railway Museum (FB) on November 11; and Deathtrap at REP East (FB) on November 14. The rest of the month is currently open. As always, I’m keeping my eyes open for interesting productions mentioned on sites such as Bitter-Lemons, and Musicals in LA, as well as productions I see on Goldstar, LA Stage Tix, Plays411.