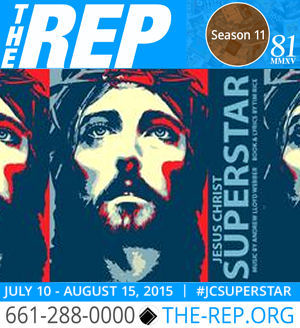 Back in early July, I attended the second performance of Jesus Christ Superstar at REP East Playhouse (FB) in Newhall. I wasn’t that impressed; the show wasn’t up to REP standards. My wife driving my daughter’s car back to her in Berkeley this weekend afforded me the opportunity to go to the closing performance of Jesus Christ Superstar. I’m pleased to say the show is 200% better. Yes, I put that in bold (well, “strong”) for a reason. This is a remarkable turnaround, and I’m delighted that the show went out with REP’s reputation for quality professional theatre intact.

So what happened? The weekend after we originally saw the show, the performances were cancelled so the show could retool. REP was reworking the show to bring in live music. Additionally, the actor playing Judas (who we had found problematic) left the show. This, combined with getting the sound mix right, made wonders for the performance — instead of leaving lukewarm, I left enthused over the performance.

As for the book…. well, the book still has its problems, but at least I could understand it a bit better now. I did find that seeing it a second time brought out some nuances I didn’t catch before. In particular, I felt a distinct parallel between the desire of Jesus’ followers to fight the establishment they didn’t like with the battles going on against the Vietnam War when this show was written. That may explain why it was so popular in early 1970s.

Chris Loprete (FB), who I had previously admired as Pontius Pilate, moved up to the Judas role and was spectacular. He sang clearly, and with the right emotion and power, and made the role work.  I also enjoyed his little nuances and reactions. This was head and shoulders above the previous performer — I was extremely impressed. It was how the role should have been played.

Moving into the role of Pilate was Kevin Becker (FB). Becker did very well with the role, with good singing and strong performance. Pilate only has a few scenes, so it is hard to say much more. His main performances come in the second act, and he was strong there.

There were also a number of other problematic areas corrected. In particular, the microphones on the actors were corrected, and you could hear everyone clearly. This was an amazing difference. I also thought that Michael Davies was much stronger in his scene as King Herod — there seem to be some nuances changed in that performance that suddenly brought forth the right tone. The remainder of the cast seems to have grown into their roles — of course, being able to hear them clearly makes a big difference. In particular, I noticed the trio (Eriel Brown (FB), Laura Norkin/FB, and I’m guessing Tara Cox/FB) and their singing and dancing much more, and it seemed to work better. I was also able to appreciate Alex Bowman (FB)’s Peter a lot more.

About the only remaining problem was that some of Jesus’ songs were at the upper end (or above the upper end) of the Benjamin Patrick Thomas (FB)’s range, and the stretch didn’t always make it. This wasn’t a major problem, however; overall, I believe that Jesus’ had gotten stronger in performance as well.

A significant change was the addition of a live band, consisting of Rick Pratt (FB), Justin G. Horwitz/FB, and Connor Pratt/FB. Live music made a significant difference, both in musical quality and musical timing. Live music for a show is a thing of beauty, and I believe and hope this is a REP tradition for the future. The band sounded wonderful.

Some things still struck me as odd: The set painting still didn’t make sense (even after having it explained — it was supposed to evoke 1970s Ocean Pacific design, but I don’t see the connections), and there were still some odd lighting flashes and points where performers were in darkness. But with all the other fixes, these nits moved to the background. Overall, I enjoyed the show much much more.

This was the last performance of Jesus Christ Superstar at REP East Playhouse (FB). For the next two weeks, J. T. Centonze (FB) moves from behind the bar to direct A Company of Wayward Saints by George Herman. J.T. is a busy man, as he is also opening Off Kilter Kilts (FB) in Pasadena. You can get tickets for A Company of Wayward Saints through the REP Online Box Office.

Upcoming Shows: Next weekend, we’re back at REP East (FB) for “A Company of Wayward Saints“. After that we’ll need a vacation … but then again we might squeeze in Evita at the Maui Cultural Center (FB) the last weekend of August. September starts with Tom Paxton’s last concert at McCabes (FB) on September 12, followed by “The Diviners” at REP East (FB) and “First Date” at The La Mirada Theatre for the Performing Arts (FB). October will bring another Fringe Festival: the NoHo Fringe Festival (FB). October also has the following as ticketed or hold-the-dates: CSUN’s Urinetown (end of October – 10/30 or 11/1);  “The Best of Enemies” at The Colony Theatre (FB) (Ticketed for Sat 10/10); and  “Damn Yankees” at Cabrillo Music Theatre (FB) (Ticketed for Sat 10/17). As always, I’m keeping my eyes open for interesting productions mentioned on sites such as Bitter-Lemons, and Musicals in LA, as well as productions I see on Goldstar, LA Stage Tix, Plays411.