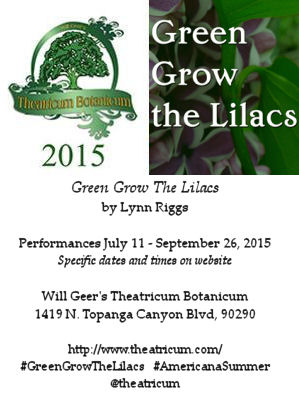 Green grow the lilacs, all sparkling with dew,
It’s a familiar tale that you thought you knew,
What’s Oklahoma! now was once much more true,
Green Grow the Lilacs will win over you

Last May, Cabrillo Music Theatre announced its 2014-2015 season: Memphis, Company, Mary Poppins, and Oklahoma!. None of which I was interesting in seeing — especially yet another production of Oklahoma!.† I’ve seen Oklahoma! far too many times, both on the stage and on the screen. Yes, it was a seminal musical back in 1943, but today it seems tired. Yet when Theatricum Botanicum (FB) announced their season, I was excited to see Green Grow the Lilacs as part of the repertoire.  Oklahoma! you see with regularity. But Green Grow the Lilacs — the play with music upon which Oklahoma! was based — you don’t see that often (after all, it only had 64 performances on Broadway). So, after a little rain delay, and a week after Cabrillo closed their very successful production of Oklahoma!, we were back for a second show at Theatricum Botanicum (FB) — Lynn Riggs’ Green Grow the Lilacs.
[†: Luckily, Cabrillo redeemed themselves with the 2015-2016 season, and we’re back as subscribers]

If you are familiar with Oklahoma!, you’re familiar with the basic plot of Green Grow the Lilacs. The cowboy Curly McClain is interested in the farmgirl Laurey Williams, who is living with her Aunt Eller Murphy in Indian Territory (eventually Oklahoma) in 1900. She’s interested in him but doesn’t want to show it, because their farmhand, Jeeter Fry, a large and potentially violent man, is interested in her and she’s scared of what will happen if she breaks it off. She has accepted an invitation to a dance party with Jeeter, making Curly take Aunt Eller. There is a comic subplot involving Ado Annie Carnes and a Syrian peddler. At the party, Jeeter makes unwanted sexual advances towards Laurey, and she runs him off. Curly proposes, and they get married. That evening, their friends drag them to the barn for the wedding night, but Jeeter shows up and sets the barn on fire. He fights with Curly, and ends up landing on his own knife. Curly is still taken away for trial. He escapes jail to return to see Laurey, but promises to go back the next morning.

If you are familiar with Oklahoma!, you’ll see some significant similarities and differences (if not, read this and come back). Some of the language was translated almost verbatim into song and dialogue, particularly the dialogue about the surrey with the fringe. However, there are significant changes in plots and subplots. In the main plot, the biggest change is the timeline and the fact that the final verdict is never rendered. There are no other girls Curly flirts with; there’s no jealousy involved. There’s no bidding on baskets. However, there are scenes that are almost directly translated into songs in the musical. The Ado Annie subplot is completely different. She’s much more timid and unsure about sex; there’s no Will Parker onstage at all. She’s there primarily as a friend for Laurie — mirroring almost the same relationship as the one between Rosalind and Celia in As You Like It. My wife commented that the story is much less centered on Laurey and Curly, and much more centered on Aunt Eller and her strength in holding things together. I’d tend to agree.

The music, of course, is completely different. GGtL features much traditional folk music: songs like Get Along Little Doggies, Old Paint, Green Grow the Lilacs, Careless Love, Skip To My Lou, Down in the Valley, and another song to the same tune as Frozen Logger. These are accompanied by the actors on the stage, almost all of who play instruments. There were numerous guitars, a banjo, an accordion, a harmonica, and various percussion devices including a washtub bass. The rendition of Careless Love was particularly beautiful and harmonious. For someone like me who loves folk music, this was a delight. In fact, I tended to like the original folk music much much more than the material Rodgers and Hammerstein developed.

To me, knowing both shows, I actually preferred Green Grow the Lilacs. The indeterminate ending seemed to feel right, the characters had the right complications to their characters. R&H simplified things and upped the humor, but sometimes the more gentle humor works better. The dialogue had a very midwestern feel to it, with loads of folk aphorisms and sayings, and midwestern behavior. The directoral team was the same as for the previous day’s As You Like It  — director Ellen Geer (FB) assisted by Jonathan Blandino/FB, and they did a wonderful job of bringing out the folksy in the characters, as well as the realism. I particularly remember watching the faces of the actors, which were mesmerizing throughout.

The acting was top right — especially when you consider that the same lead actresses had leading roles in the previous day’s As You Like It, where they played Rosalind, Cellia, and Jaques. How they remember all the dialogue astounds me. Our lead couple was Willow Geer (FB) [Laurey Williams] and Jeff Wiesen (FB) [Curly McClain]. Geer had a lovely charm about her, a friendliness and folkishness that made her perfect for the character. Her performance was wonderful — she was one of the faces I couldn’t stop watching — and her singing was delightful. She also played the banjo very well (but there’s more money in acting 🙂 ). Wiesen had a lovely singing voice and created a great character as Curly — you could see why Laurey loved him.

Aunt Eller was portrayed by Melora Marshall (FB); yesterday’s Jaques. Here she changed from a grizzed war veteran to a grizzed farmer who was worldly wise from experience. Again, she gave a wonderful portray, and combined that with lovely singing and performance on a multitude of stringed instruments (I saw guitar and autoharp).

The subplot couple was portrayed by Elizabeth Tobias (FB) [Ado Annie] and Zachary Davidson (FB) as the Peddler. Tobias was wonderful comic relief — in some ways similar to her As You Like It role, and was fun to watch in the second act when she was working on sewing, or her comic walking with the garters. Davidson was similarly humorous, especially when he was hiding or jumping around trying to sell things.

Turning to the technical side: there was much more scenic design than in As You Like It. There were numerous set pieces and properties, under the direction of property master Erin Walley. As her link shows she is a set designer, I’m guessing she did that as well. The Sound Design by Ian Flanders (FB) was much more noticeable, as there were numerous sound effects. In fact, I almost thought the noise of all the crickets was a sound effect as well — they were that good. Lighting was by Zach Moore/FB, and was mostly white. The costume designer was Randy Hozian, and was quite effective and seemingly appropriate for the period. Kim Cameron/FB was the stage manager, assisted by Jackie Nicole (FB).

Green Grow The Lilacs continues in repertory with As You Like It, A Midsummers Night Dream, To Kill a Mockingbird, and August:Osage County at Theatricum Botanicum (FB) through September 26. There appears to be two shows most weekend, usually at 7:30 PM (except 8/16 at 3:30 PM). Tickets are available through the Theatricum Box Office. Discount tickets appear to be available through Goldstar. This is well worth seeing — you don’t see the real Oklahoma every day. It is also wonderful if you love folk music.

Upcoming Shows: Next weekend is busy, with “The Fabulous Lipitones” at  The Colony Theatre (FB) on Friday, our summer Mus-ique show on Saturday, and Concerts on the Green in Warner Park (with a Neil Diamond cover band) on Sunday. The third weekend of August is calmer, but only because we moved theatre off the weekend because my wife is driving my daughter’s car back to the bay area. As for me, I might very well go back to see the revised “Jesus Christ Superstar” at REP East (FB) — they are returning to have live music and I expect that will make a significant difference. The third week of August may see us back at REP East (FB) for their “secret seventh show”, which has been revealed to be “A Company of Wayward Saints“. After that we’ll need a vacation … but then again we might squeeze in Evita at the Maui Cultural Center (FB) the last weekend of August. September starts with Tom Paxton’s last concert at McCabes (FB) on September 12, followed by right now is mostly open, with the only ticketed show being “The Diviners” at REP East (FB) and a hold-the-date for “First Date” at The La Mirada Theatre for the Performing Arts (FB). October will bring another Fringe Festival: the NoHo Fringe Festival (FB). October also has the following as ticketed or hold-the-dates: CSUN’s Urinetown (end of October – 10/30 or 11/1);  “The Best of Enemies” at The Colony Theatre (FB) (Ticketed for Sat 10/10); and  “Damn Yankees” at Cabrillo Music Theatre (FB) (Ticketed for Sat 10/17). As always, I’m keeping my eyes open for interesting productions mentioned on sites such as Bitter-Lemons, and Musicals in LA, as well as productions I see on Goldstar, LA Stage Tix, Plays411.