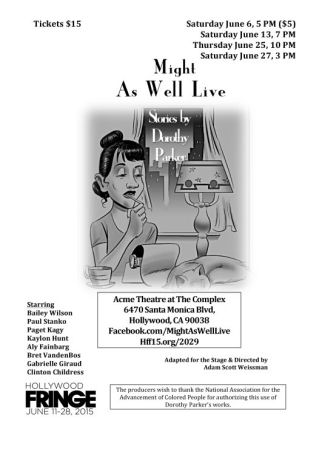 By now, you’ve probably figured out I’ve tried to participate in the 2015 Hollywood Fringe Festival (FB) as fully as I could, modulo other commitments and general unavailability on weeknights. So, when it came to the last night I could participate in the festival (I have another commitment on closing night), I looked through the Fringe catalog. Most of the shows I wanted to see were not running that night, but there was a show about Dorothy Parker that timed right. Parker was a well-known wit and commentator, and a presentation of some of her stories might be interesting. If you’re unfamiliar with Parker, you might recognize her poem I quoted in the title:

Razors pain you;
Rivers are damp;
Acids stain you;
And drugs cause cramp.
Guns aren’t lawful;
Nooses give;
Gas smells awful;
You might as well live.

Hence, this afternoon saw us at our last Fringe show, Might As Well Live: Stories By Dorothy Parker (FB) at the Acme Theatre at the Complex Theatres (FB).

Might As Well Live presented four vignettes from short stories by Parker: “The Lovely Leave, 1942”; “You Were Perfectly Fine, 1968”, “New York to Detroit, 1997”, and “The Game, Today”. Although I found them entertaining, they were not super engrossing or something that sparked the “Wow” factor. Let me describe the four stories, and then try to figure out why they didn’t hit the nerve they should have:

Thinking back over these, I think the reason they didn’t grab is that they were too short. Each of the stories was crying out for more — for a longer treatment, a deeper exploration of the characters, for something deeper than the superficial. Treating the stories as lightly as they were treated did not create the investment in the characters — you didn’t know who they were, and you didn’t really care what happened to them. They were meaningless brief scenes, when they could have been much more.

Further, even if they were to keep the scenes short, they didn’t select the stories to provide some through theme or make some through point from the overall collection. The stories seemed random, unconnected, and it wasn’t clear what point they were trying to make about Dorothy Parker other than, well, she wrote short stories.

Unless you are a Parker fan (and they are out there — after all, this was funded by a Kickstarter with 56 backers), I think this production needs some dramatalurgical work (if that’s a word). Get us more invested in these stories, even if you need to expand them a little. Connect the dots between the stories to make a point about Parker. Were these reflective of some overall attitude towards life? Towards men? Towards women? Towards society at large? What was she trying to say between the lines? Bring out those points, and this work would improve quite a bit.

Independent of the story, the performances where quiet good. I enjoyed Bailey Wilson in both of her roles — both as the overly anxious wife in “Lovely Leave”, as well as the bride-to-be who was clueless about her husband’s past in “The Game”. I also enjoyed Paget Kagy for her performance in “The Game”, as the silent instigator. It really raised the question — never explored — about why she hated Bob Lineham so much and wanted to cause him pain. Bret VandenBos’ Peter in “You Were Perfectly Fine” was also quite good. Lastly, Gabrielle Giraud was great as Jean, the woman trying to communicate with her husband, in “New York to Detroit”.

The program handed out provides no technical credits (tsk, tsk — they make you look good on stage). I’ll note that Steve Parker’s uniform was distracting — yes, it was correct army, but the insignia was a double chevron, which would have been a corporal — yet he was referred to as a Lt. (which would have been a single bar). I’m picky on this, primarily because I work with the Air Force every day. Otherwise, the costuming was reasonable, and the lighting established the mood without distraction. No credit was given for stage management. Might As Well Live was adapted for the Stage and Directed by Adam Scott Weissman (FB). There were numerous executive producers, associate producers, and special thanks, which referred to Kickstarter bonuses. In a real production sense, Might as Well Live was co-produced by Adam Scott Weissman (FB) and Bailey Wilson/FB.

This was the last performance of Might As Well Live: Stories By Dorothy Parker (FB). There is no mention yet of an extension.

Upcoming Shows: Tomorrow, it is time for something different: time to see teams of 130 young adults, ages 16-21, broken into color guard (flags, props), brass, and percussion, performing in the Riverside heat in 15 minutes shows, being judged on musical quality, precision, general effect, and individual captions. That’s right, we’ll be at the Western Corps Connection (if you don’t know what Drum Corps competitions are, read this) in Riverside. July is a month of double-headers, begining with “Murder for Two” at the Geffen Playhouse (FB) on July 3rd, and “Matilda” at the Ahmanson Theatre (FB) on July 4th. The next weekend is another double: On Friday night, July 10th, we’re seeing Colin Mitchell‘s show Madness, Murder Mayhem: Three Classic Grand Guignol Plays Reimagined at Zombie Joes Underground Theatre (FB); Saturday July 11th brings “Jesus Christ Superstar” at REP East (FB). The following weekend is another double header: “The History Boys” at the Stella Adler Theatre (FB) on Saturday (Goldstar), and “Green Grow The Lilacs” at Theatricum Botanicum (FB) on Sunday.  The last weekend of July brings our last double: “Lombardi” at the Lonny Chapman Group Rep (FB) on July 25th, with the annual Operaworks show the next day. August start calming down, with “As You Like It” at Theatricum Botanicum (FB) the first weekend of August, our summer Mus-ique show the second weekend of August, and “The Fabulous Lipitones” at  The Colony Theatre (FB) the third weekend of August. After that we’ll need a vacation … but then again we might squeeze in Evita at the Maui Cultural Center (FB) the last weekend of August. September right now is mostly open, with the only ticketed show being “The Diviners” at REP East (FB) and a hold-the-date for “First Date” at The La Mirada Theatre for the Performing Arts (FB). October will bring another Fringe Festival: the NoHo Fringe Festival (FB). October also has the following as ticketed or hold-the-dates: Kelrik Production (FB)’s Urinetown at the Monroe Forum Theatre (Hold for Sat 10/3);  “Mrs. A. Lincoln” at The Colony Theatre (FB) (Ticketed for Sat 10/10); and  “Damn Yankees” at Cabrillo Music Theatre (FB) (Ticketed for Sat 10/17). As always, I’m keeping my eyes open for interesting productions mentioned on sites such as Bitter-Lemons, and Musicals in LA, as well as productions I see on Goldstar, LA Stage Tix, Plays411.