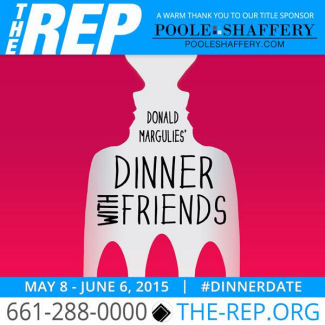 This August marks my 30th wedding anniversary. As with any relationship, my relationship with my wife has seen its ups and downs, and it has changed and adapted as the years have gone by. Relationships — especially long-term relationships — are like that. Communication is key — both verbal and non-verbal — as well as understanding and humor. With the right skills, relationships can last. Without them… you end up with a story like the one we saw last night at Rep East Playhouse (FB) in Newhall (Santa Clarita): “Dinner with Friends” by Donald Margulies.

“Dinner with Friends” tells the story of two couple — Gabe (Jack Impellizzeri (FB)) and Karen (Nancy Lantis (FB)), and Tom (Dennis Hadley (FB)) and Beth (Leslie Connelly (FB)). They have a deeply interwoven relationship: Gabe and Tom have been friends since they first met in college; Karen and Beth have been friends since they worked together at a publishing company. Further, Gabe and Karen brought Tom and Beth together 12 years ago. The two couples, like many couples do, formed an extended family (together with their two children, each). As the play opens, Gabe and Karen are having Beth over for dinner (Tom being unavailable due to a business trip); they are their usual epicurian selves, going over every detail of the food and their recent trip to Italy. Beth breaks down, informing them that she and Tom are splitting up, and describing what lead up to the breakup. After returning home from the evening, Beth is suprised by Tom (whose business trip was cancelled). Tom discovers that Beth told Gabe and Karen about the split, and is pissed that he didn’t get to present his side of the story. So he heads over to Gabe and Karen’s to tell the events as he sees them. As the play goes on, we learn the backstory of the split — as well as the fact that neither side is presenting the events without their particular spin on the story. We also see the effect of the split on Gabe and Karen, who seemingly have a solid marriage built around humor and communication. Gabe and Karen are placed in that unenviable position that happens when a close couple splits: Who do you believe? Who do you side with? Who will remain as friends, and can it be both? What does it say about us as a couple that we didn’t see this coming? It also makes Gabe and Karen subtly question their relationship: perhaps their relationship isn’t quite what they think it is.

It is at this point that Gabe uses the phrase, “The evolution of a relationship”. He believes that relationships change as practical matters take precedence over abandon. This is the real difference between the two couples: Tom and Beth wanted abandon; Gabe and Karen have learned to replace that with the practical. In fact, as the play end, Gabe tries to force the abandon, and it just feels wrong.

To me, studying the evolution of relationships what this play is about. Reading other reviews of the play, I think that’s why this play resonates with so many. In natural language — a language we can all understand —  audience members see their own relationships. Perhaps they are like Tom and Beth — not seeing the signals of things going off the rails, not realizing the reasons they came together may not have been conducive to the long term. Perhaps they are closer to Gabe and Karen, addressing things with humor (and similarly not seeing potential warning signs that might be nothing… or might just be indicative of a much longer fuse cord). The presentation wasn’t earth shattering; it wasn’t grand entertainment. But it also wasn’t contrived — it came across as a slice of real life that reflected natural relationships.

Is this play a comedy or a drama? It has elements of both; I think it tries to find the comedy in complex dramatic situations. The couple we were with seemed to view it more as a drama; in fact, they wanted more drama and conflict. They also noted the fact that the characters weren’t particularly likeable — there was no one they could empathize with. I didn’t see those problems, but I bring them up because I do think different people will react to this differently.

The performances were uniformly excellent. Under the direction of Brad Sergi (FB) (assisted by Bill Quinn/FB), the chemistry between each couple was amplified in a playful way, and they came off as realistic characters (Sergi and Quinn are the team that did such a great job on last year’s Cat). I really can’t single out any performance — they were just a perfect ensemble.

Technically, the set was simple. Tables, chairs, sofa, bed, not particularly tied to a particular place by design. It worked, proving you don’t always need a fancy design to establish place — often the skill of the actors can create the place through performance. More significant, technically, were the excellent sound effects — including the children and the car chirps. Lighting, like the set, was also simple but served to focus your attention on those portions of the stage that required focus. The technical team consisted of: Mikee Schwinn/FB (Set Design / Stage Hand), Jeffrey Hampton/FB (Stage Manager / Lighting Design), Steven “Nanook” Burkholder/FB (Sound Design), J. T. Centonze (FB) and Vicky Lightner/FB (Additional Stage Managers). Costumes and food props were provided by the cast. Dinner with Friends was produced by Ovington Michael Owston (FB) and  Mikee Schwinn/FB.

I’ll note that the program for this show was skimpier than usual. Upon inquiry, I learned that was because the sponsorship for this show materialized late. This is a demonstration of the fact that ticket sales alone are insufficient to support intimate theatre. Grants help some, but are also insufficient. Shows often depend on corporate and institutional sponsors to underwrite their costs of production; without such underwriters, production is precarious. If you are aware of a business in Santa Clarita or the San Fernando Valley — especially the northern Valley — that wants to support local cultural institutions and promote their business to attendees, contact REP East Playhouse at 661.288.0000.

Upcoming Shows: This evening brings “Violet: The Musical” at the Monroe Forum Theatre (FB). The weekend of May 23 brings Confirmation services at TAS, a visit to the Hollywood Bowl, and “Love Again“, a new musical by Doug Haverty and Adryan Russ, at the Lonny Chapman Group Rep (FB).  The last weekend of May brings “Entropy” at Theatre of Note (FB) on Saturday, and “Waterfall“, the new Maltby/Shire musical at the Pasadena Playhouse (FB) on Sunday. June looks to be exhausting with the bounty that the Hollywood Fringe Festival (FB) brings (ticketing is now open). June starts with a matinee of the movie Grease at The Colony Theatre (FB), followed by Clybourne Park (HFF) at the Lounge Theatre (FB) on Saturday, and a trip out to see the Lancaster Jethawks on Sunday. The second weekend of June brings Max and Elsa. No Music. No Children. (HFF) at Theatre Asylum (FB) and  Wombat Man (HFF) at Underground Theatre (FB) on Saturday, and Marry Me a Little (HFF) by Good People Theatre (FB) at the Lillian Theatre (FB) on Sunday. The craziness continues into the third weekend of June, with Nigerian Spam Scam Scam (HFF) at Theatre Asylum (FB) and Merely Players (HFF) at the Lounge Theatre (FB) on Saturday, and Uncle Impossible’s Funtime Variety & Ice Cream Social, (HFF) at the Complex Theatres (FB) on Sunday (and possibly “Matilda” at the Ahmanson Theatre (FB) in the afternoon, depending on Hottix availability, although July 4th weekend is more likely). The Fringe craziness ends with Medium Size Me, (HFF) at the Complex Theatres (FB) on Thursday 6/25 and Might As Well Live: Stories By Dorothy Parker (HFF) at the Complex Theatres (FB) on Saturday. June ends with our annual drum corps show in Riverside on Sunday. July begins with “Murder for Two” at the Geffen Playhouse (FB) on July 3rd, and possibly Matilda. July 11th brings “Jesus Christ Superstar” at REP East (FB). The following weekend is open, although it might bring “As You Like It” at Theatricum Botanicum (FB) (depending on their schedule and Goldstar).  July 25th brings “Lombardi” at the Lonny Chapman Group Rep (FB), with the annual Operaworks show the next day. August may bring “Green Grow The Lilacs” at Theatricum Botanicum (FB), the summer Mus-ique show, and “The Fabulous Lipitones” at  The Colony Theatre (FB). After that we’ll need a vacation! As always, I’m keeping my eyes open for interesting productions mentioned on sites such as Bitter-Lemons, and Musicals in LA, as well as productions I see on Goldstar, LA Stage Tix, Plays411.