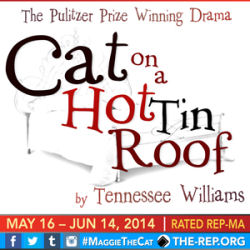 Dysfunctional families are everywhere you look. They were in the early days of England last week, and they are in the deep south this weekend. This is because functional families are, less face it, boring. Certain they are boring if you are looking to mine some comedy or drama for the stage — this is why some of the best known plays are about dysfunction. As I noted before, this weeks dysfunction was in the deep south, in the classic Tennessee Williams‘ play “Cat on a Hot Tin Roof” at REP East (FB) Playhouse in Newhall, California.

We last saw the Cat in a production at the Neighborhood Playhouse in Palos Verdes in 2009. Back then, I described the play as follows:

“Cat on a Hot Tin Roof” is a Pulitzer-Prize winning play written by Tennessee Williams. It tells the story of a decaying southern family, the Pollitts. The family patriarch (“Big Daddy”) is dying, and his two children are scrambling to get their piece of the substantial wealth, including 28,000 acres of prime land. Well, his children (his two sons Brick and Gooper) aren’t scrambling, but their wives certainly are. They are going at it like, well, cats. In one corner we have Gooper and Mae, and their four (soon to be five) children, including Dixie, Trixie, and Polly. The children are misbehaved, Mae is scheming and gossiping, and Gooper is exploiting legal angles. However, Gooper and Mae have one significant problem: Big Daddy dislikes them intensely (and Big Daddy is a nasty man). In the other corner we have Brick and Maggie. Brick is, to be blunt, a drunk. He drinks and drinks until he feels the click, which takes him away from the world. He does this to escape the loss of his only true friend, Skipper, who drank himself to death after an affair with Maggie (the depth of the relationship is left unsaid, but there are clear implications of something that was unacceptable in 1955). He also drinks to escape Maggie — it is unclear whether he hates her, but he is clearly indifferent to her. Needless to say, they haven’t been having sex or even been civil to each other. Brick has been been rapidly sinking — as the story starts, he had just broken his ankle jumping hurdles while drunk. But Maggie, eager for the inheritance, has been putting on “the face”: there is nothing wrong, there is no drinking problem, and that there might even be a child on the way.

The central theme of this play is a family destroyed by, as Brick puts it, “mendacity”: in other words, this is a family is given to or characterized by deception or falsehood or divergence from absolute truth. In other words: they lie like dogs. Or is that cats? Anyway: Brink lies to Maggie. Maggie lies to Brick. Maggie lies to Big Daddy. Big Mama lies to Big Daddy. Everyone hides everything, unless, of course, it can be used to hurt. This, of course, means they are a typical American family :-), and perhaps this is why this play has resonated so well over the years to become a classic.

Last night, certain undertone struck me differently. First, I got much more of a homosexual vibe from the play. Without changing the word, the nature of Skipper’s repressed homosexuality was clearer, and (in turn) the nature of Bricks reaction to it was stronger. This adds another potential layer to the lies: was Brick lying to himself about his desires. After all, Maggie (who was clearly a sexy young woman) seemed to have to effect on him at all; in the REP production, he even turns away from her in the final scenes. Was Brick moving from his lies to acceptance? That’s unclear.

Last week, when writing about “The Lion in Winter“, I commented that we had a playful of characters sniping at each other, with no growth in the lot of them. This made the play entertaining but unsatisfying. As a result, it is reasonable to ask: was there growth in the characters in Cat? There certainly wasn’t in the secondary characters: Goober, Mae, and Big Mama are unchanged. I do think there was some element of growth in Big Daddy — certainly there was a realization that he was facing death, and that none of his sons was suitable to replace him (hmmm, that sounds just like the conclusion in Lion). Was there growth in Brick? Harder to say, as heavy use of alcohol tends to limit ones ability to grow. I do think that, perhaps, near the end there was a glimmer of realization of his attractions; however, I don’t think it was growth that would stick. The ultimate question is: Did Maggie grow? Certainly the lie about being pregnant was uncharacteristic of her; it is unclear if that lie came from character growth and understanding of her situation, or the needs of the situation.

One thing that hit me during this play was the patriarchal nature of it, which is unsaid. This came from the realization that with all the discussion of passing Big Daddy’s wealth to his sons, there was no mention of passing it to Big Momma and her managing it afterwards. Was this reflective of the attitudes of the 1950s that tended not to view woman as capable of taking over a man’s work? One could imagine very different discussions in such a family today.

In the Rep East production, director Brad Sergi (FB) (assisted by Bill Quinn/FB) did a great job of bringing out touching performances in his actors. Chief among his finds was his cat, Maggie. Maggie was played by Emily Low (FB) in her stage debut (she does have TV experience and it a classic burlesque artist and traditional pin-up model). Low came across as a southern Marilyn Monroe-type: sexy (and knowing it), but equally scheming as well. She was always trying to be one step ahead of everyone else. This is a role that has loads and loads of dialogue (especially in the first act), and Low handled it like a trouper. She was really fun to watch.

As Brick, Anton Troy (FB) had the appropriate glistening sexy hunk vibe. He was constantly drinking during the show, and you could tell from his portrayal that the character was slowly becoming more inebriated. I’m guessing this was performance, as opposed to having actual liquor in the props (but if it was the latter, I feel sorry for his liver at the end of the run). His performance was good, and had some nuances that led to that indeterminate conclusion I mentioned above.

Turning to the technical creatives. This go around, Mikee Schwinn/FB did the set. It reminded me a bit of the Neighborhood Playhouse set. I particularly liked the large tree painted on the wall — I want one of those somewhere in the house, it was that neat. The remainder of the set was dark red lounges and chairs, and doors and walls and diaphonous curtains. These worked well; I’m less sure if it gave off the deep south vibe that it needed. Cat is one of those plays that deals with the decay of the family; this decay needs to carry to the furnishings. They need to be elegant things that have seen better days. Sound and lighting were by REP regulars Steven “Nanook” Burkholder/FB (sound) and Tim Christianson/FB (lighting), and both were effective. Costuming was by Flo Loring (FB) and Lynn McQuown (FB) and worked well. In particular, Emily Low’s sexy gown showed her, character, off very well; Anton Troy’s towel in the opening scenes did much of the same. Foley Recording was by Dennis Poore. Vicky Lightner/FB was the stage manager. “Cat on a Hot Tin Roof” was produced by Mikee Schwinn/FB and Ovington Michael Owston (FB).

Upcoming Theatre and Concerts:  Next weekend brings the musical “Lil Abner” at LA City College (directed by Bruce Kimmel, with choreography by Kay Cole). The last weekend of May is an offbeat parody musical: “Zombies from the Beyond” at the Lex Theatre. June is also busy. It starts with a CDF Conference for Karen while I see “The Fantastiks” at Good People Theatre (FB). We lose the following weekend to a Bat Mitzvah. The remainder of the month brings “Stoneface: The Rise and Fall of Buster Keaton” at the Pasadena Playhouse (FB) on June 22, and “I’m Not Just a Comic Genius” at Secret Rose (FB) on June 27. July will be busy: “Ghost” at the Pantages (FB) on 7/5, “Return to the Forbidden Planet” at REP East (FB) the weekend of 7/12, “Once” at the Pantages (FB) on 7/19, “Bye Bye Birdie” at Cabrillo Music Theatre (FB) on 7/26, and “Family Planning” at The Colony Theatre (FB) on 8/2. August then remains quiet as we work around vacations and such, but things start to get busy again in September and October. More on that later. As always, I’m keeping my eyes open for interesting productions mentioned on sites such as Bitter-Lemons, and Musicals in LA, as well as productions I see on Goldstar, LA Stage Tix, Plays411.