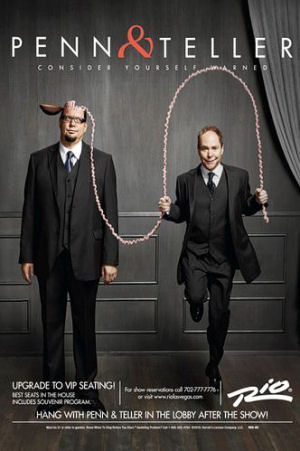 Last night we saw what is likely to be our last show for this trip: Penn & Teller (FB) at the Rio Hotel and Casino. This is a show we’ve been wanting to see for years; luckily, there were Goldstar tickets available for the period of this trip. I’ve since learned that discounted tickets are often available for Penn & Teller, and often those discounts can land you in the orchestra section, not the mezzanine where we were. Perhaps next time.

Penn & Teller have one of the longest running headliner shows in Vegas – 14 years at the Rio, 29 in Vegas. They debuted in Las Vegas in 1993 and have been performing at the Rio since 2001. The reason for their success is that they are entertaining. But they are not for everyone. If you hate atheists or libertarians, then don’t go to the show. Penn is well known for not being quiet about his beliefs (Teller is known for being quiet about everything). In this show, he is very “in your face” about his beliefs. Reading the Yelp reviews, this offended quite a few attendees; heaven forfend if your beliefs are challenged. Penn also does a lot of talking and introduction to the various tricks. Again, this offended a lot of attendees (looking at the Yelp reviews): if you want a magic act that is all flash and music, as opposed to being somewhat intellectual and preachy, then go somewhere else. Penn & Teller is intellectual magic — they consciously want you to think about their tricks, and then they pull them off leaving you even more astonished at how they did it. Further, they admit upfront that much of this is verbal misdirection… and with this, you still can’t see how they did it. Astonishing.

Penn & Teller is also a show that loves its audience. Although the show is at 9:00PM, they recommend that you arrive around 8:00 PM. This is because they open the doors about 8:20 PM, and the audience is entertained by the Mike Jones Duo (FB) (and, if you look closely, you’ll see it is Penn Jillette (FB) playing Bass). The show itself includes loads of audience participation, from before the show when you can sign an envelope and inspect a box, to all of the tricks that involve audience members. Lastly, after the show, both Penn and Teller are available outside the theatre for pictures and “meet and greet”.

The show itself is claimed to include a rotating collection of tricks from the Penn & Teller repertoire. In reality, that is likely yet another trick because they have to have the necessary supporting props and equipment, not to mention the lighting and music cues, ready. They do not provide a list of tricks or a program (well, you can purchase a program for $10). The following are the tricks I recall — I’m not going to describe them in detail to preserve the surprise (they were not presented in this order, but the first and last tricks are what were first and last):

The illusions themselves were spotless, and I found the dialogue entertaining. On every illusion, you’ll find yourself wondering how they diverted and deceived you to pull it off.

I’ll note that I read through a lot of the Yelp reviews to bring this write-up together (I didn’t write down the illusions during the show and they don’t provide a list, so I needed to jog my memory. Lots of people did not like this show because it didn’t meet their expectations or match their politics or beliefs, or they found something else to offend them. So, in the spirit of being upfront:

Advisory Notice:  The Penn & Teller show contains significant spouting by Penn Jillette of his political opinions. If you cannot stand Libertarian political positions, or having your political beliefs questioned or made fun of… don’t go. Penn also debunks psychics and belief in God. If that offends you, don’t go. Penn also makes fun of other magicians and those that believe in magic. If that offends you, don’t go. If you paid full price for your tickets, you obviously have more $$ than you need. Remember to visit the Merch store (and buy Mike Jones CD — Merch always supports the artist). If you want splash and flash and lots of pretty magician’s assistants, don’t go. This is a wordy show. If you don’t like Jazz music, arrive just before the show starts. If you want to see things close up, buy VIP seating. There is no video enhancement. This show is at the Rio Hotel and Casino, which is west of the strip (i.e., off-strip) on Flamingo, near the Gold Coast and Palms casinos. There are two shuttles from sibling Caesar’s properties: Ballys/Paris and Harrahs. If you want a show on the strip, don’t go.

We sat in the Mezzanine. This made it difficult to see many of the close-up tricks. Penn & Teller could have used video to enhance the process, but as they point out in the show, there is no guarantee that the video you see is what is happening onstage. Video can easily be manipulated. Most people do not realize that. My suggestion: Bring binoculars. We’ll do that next time.

Penn Gillette announces and introduces the staff and crew at the end of the show. This includes not only the assistant, but the crew that moves stuff on stage, the sound and light people, and the stage manager. However, there does not appear to be a list online; Penn tweeted me that it is in the souvenir program (which costs $10). Alas, I bought the Bill of Rights instead. I’m still looking for the information. [ETA: Information from Penn’s tweet]

Penn & Teller (FB) continue at the Rio Hotel and Casino.until… well, until they don’t. They have an extended contract, and both live in Las Vegas, so expect to see them here for a long time. Their show is well worth seeing (but you should be prepared for what you are getting, and if you don’t want the “preach”, then go somewhere else — there are plenty of “magic” shows in town designed for you). You can purchase full price tickets through the Rio website. You can get discount tickets almost everywhere. We got ours through Goldstar, but they are regularly at Tix4Tonight as well as numerous other sites.   Get their early if you like good Jazz.

Dining Notes: We ate at the All American Bar and Grille at the Rio. The food was tasty, but be forewarned: although they serve a black bean and quinoa burger on a gluten-free bun, the burger itself is not gluten-free. However, you can substitute the GF bun onto their other burgers. Their fries are also not cooked in a dedicated fryer, so substitute something for the fries. You can substitute roasted vegetables, but be forewarned they are overly salted (so ask them to be light on the salt). I’ll also note that the Rio is one of a few casinos that still has Keno runners and a Keno board at the restaurants. I love this — and not only to play with the crayons. I always try to figure out the odds on Keno. It is one of the worst casino games you can play, but figuring out the odds is a good mental exercise.

Small World Note: Walking through the Rio, I happened to run into a work colleague who had just driven up for the weekend. What are the odds. We should have played the slots afterwards.

Upcoming Shows: Depending on whether discount tickets are available, we might go to either Don Rickles at the Orleans or Jeff Dunham at Planet Hollywood…. or we might not.  Los Angeles theatre resumes next weekend with “Loopholes: The Musical” at the Hudson Main Stage (FB) on May 2. This is followed by “Words By Ira Gershwin – A Musical Play” at The Colony Theatre (FB) on May 9 (and quite likely a visit to Alice – The Musical at Nobel Middle School).  The weekend of May 16 brings “Dinner with Friends” at REP East (FB), and may also bring “Violet: The Musical” at the Monroe Forum Theatre (FB) (I’m just waiting for them to show up on Goldstar). The weekend of May 23 brings Confirmation services at TAS, a visit to the Hollywood Bowl, and “Love Again“, a new musical by Doug Haverty and Adryan Russ, at the Lonny Chapman Group Rep (FB).  The last weekend of May brings “Entropy” at Theatre of Note (FB) on Saturday, and “Waterfall“, the new Maltby/Shire musical at the Pasadena Playhouse (FB) on Sunday. June looks to be exhausting with the bounty that the Hollywood Fringe Festival (FB) brings (note that all Fringe dates are holds; ticketing doesn’t open until 5/1). June starts with a matinee of the movie Grease at The Colony Theatre (FB), followed by Clybourne Park (HFF) at the Lounge Theatre (FB) on Saturday, and a trip out to see the Lancaster Jethawks on Sunday. The second weekend of June brings Max and Elsa. No Music. No Children. (HFF) at Theatre Asylum (FB) and  Wombat Man (HFF) at Underground Theatre (FB) on Saturday, and Marry Me a Little (HFF) by Good People Theatre (FB) at the Lillian Theatre (FB) on Sunday. The craziness continues into the third weekend of June, with Nigerian Spam Scam Scam (HFF) at Theatre Asylum (FB) and Merely Players (HFF) at the Lounge Theatre (FB) on Saturday, and Uncle Impossible’s Funtime Variety & Ice Cream Social, (HFF) at the Complex Theatres (FB) on Sunday (and possibly “Matilda” at the Ahmanson Theatre (FB) in the afternoon, depending on Hottix availability, although July 4th weekend is more likely). The Fringe craziness ends with Medium Size Me, (HFF) at the Complex Theatres (FB) on Thursday 6/25 and Might As Well Live: Stories By Dorothy Parker (HFF) at the Complex Theatres (FB) on Saturday. June ends with our annual drum corps show in Riverside on Sunday. July begins with “Murder for Two” at the Geffen Playhouse (FB) on July 3rd, and possibly Matilda. July 11th brings “Jesus Christ Superstar” at REP East (FB). The following weekend is open, although it might bring “As You Like It” at Theatricum Botanicum (FB) (depending on their schedule and Goldstar).  July 25th brings “Lombardi” at the Lonny Chapman Group Rep (FB), with the annual Operaworks show the next day. August may bring “Green Grow The Lilacs” at Theatricum Botanicum (FB), the summer Mus-ique show, and “The Fabulous Lipitones” at  The Colony Theatre (FB). After that we’ll need a vacation! As always, I’m keeping my eyes open for interesting productions mentioned on sites such as Bitter-Lemons, and Musicals in LA, as well as productions I see on Goldstar, LA Stage Tix, Plays411.