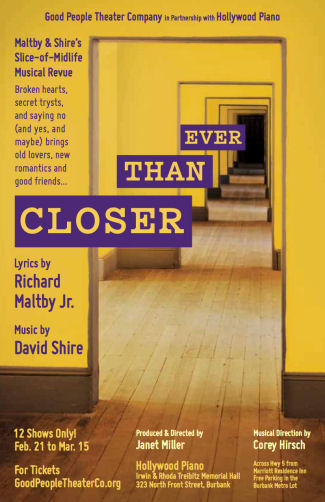 If I was to tell you that I attended a wonderful live music performance yesterday at a venue tucked away inside a music store… you probably would be thinking I attended yet another folk music concert at McCabes or Boulevard Music.  But there was nary a guitar or banjo in sight; in fact, I doubt the instruments in this room could be hung on the walls, or easily grabbed and taken out with you as you exited in an emergency. That’s because this was a special show being held in a special place — the Good People Theatre Co (FB)’s production of Maltby/Shire’s Closer Than Ever at Hollywood Piano in Burbank (produced in partnership with Hollywood Piano (FB). This new location of Hollywood Piano has a recital room, and this room was hosting the show… and providing a wonderful 9½ foot Mason & Hamlin grand piano for accompaniment. More on that in a minute.

“Closer Than Ever” is an interesting show. It is not a musical in the traditional sense — there is no story, there are no particular characters. It is really a revue of gorgeous songs written by Richard Maltby Jr. (lyrics) and David Shire (music) (FB) — many written for relationship shows and then cut. We last saw the musical back in 1992 — long before I started doing these writeups — at the Pasadena Playhouse. I have vague memories of that show: four performers on a stage in the distance, and some set of musicians on stage.

This performance had two key differences. The first is a double difference: resonance. When I saw the show for the first time, back in 1992, I was 32 with no children. In 2015, I’m 55 with a daughter in college. The songs — which sing of relationships and middle age problems and marriage and divorce and love and loss — resonate quite differently with me. Back in 1992, my favorite song was Miss Byrd, about the hidden sexual nature of the people around you. That’s a 32 year old talking — sex on the brain. In 2015 my favorite songs are different. The resonance hits more with songs like “The March of Time”, and lines that talk about being parent to your parents. The second resonance difference is a real resonance. C’mon, have you ever heard a 9½ foot Mason & Hamlin (FB) grand piano? That thing is beautiful and deep and … oh, indescribably trasnscendent. I had never thought before about how the size and shape of a piano affects the sound (or looked closely at the stringing — can you  tell I’m an engineer yet?). This was a performance instrument — a concert grand. When you look at the size of the soundboard, you realize there is a richness in the notes and in the sound that you just cannot get with your typical electronic keyboard or upright piano. Sitting up front, as we were, it was a delight.

The second difference is the difference between a venue like the Pasadena Playhouse and an intimate theatre. This was a small venue, and we were right up there with the performers. We could watch their faces, we could scrutinize their movement and even their breathing. We could watch their eyes, their expressions, their nuances. These weren’t distant actors on a stage; they were real people telling us their stories. Of course, it didn’t hurt that these were good actors, believably reacting to these songs, enjoying these songs, living and breathing these songs. This ability to be “up close” is one thing that makes intimate theatre special. As I noted with Avenue Q at REP earlier in the year, the closeness provides that different focus that makes the experience of the story extremely different than what you would get from seeing the exact same show, with the exact same performers, in a larger venue such as the Playhouse, the Pantages, or the Ahmanson. Intimate theatre — especially intimate theatre as we have it here in Los Angeles — is too special to lose. More on that later.

If you haven’t figured it out by now, I think this production — which was produced, directed, had musical staging by Janet Miller (FB) — was spectacular. It was amazing to watch the actors up close; it was amazing to watch the musicians up close; it was amazing to watch the interaction between all the parties…. and that piano. As I’ve noted before, I had trouble telling how much of this was direction from Miller, and how much of it was from the actors and musicians — but you know what? It doesn’t make a difference. It was seamless, reflecting the fact that this production was a collaboration between the artists. That love of the material from all parties comes across unspeakably to the audience and adds to the magic.

This version of Closer Than You used four singers in addition to the musicians. Some versions use six singers (3 men, 3 women), which makes songs like “Three Friends” a little less odd. The cast here did remarkably — kudos and applause to the singers (Gabriel Kalomas (FB), Sara J. Stuckey (FB), Jessie Withers (FB) and David Zack (FB)) and the musicians (Corey Hirsch (FB) at the piano and Brenton Kossak (FB) on bass). We’ve seen Kalomas before in both Big Fish and in Side Man at the REP, and he was great in songs such as “I’ll Get Up Tomorrow Morning” or “Fandango”. There were a few points where he had this odd earnest look on his face, but just a great person to watch. We’ve also seen Stuckey before — in Big, in an intimate production of Gypsy, and in the NoHo arts production of Dirty Rotten Scoundels. She was great then, and she was great now. She just soared in “Miss Byrd” and “You Wanna Be My Friend” — just spectacular in all numbers. The two other singers were new to us, but were just great. I particularly enjoyed watching the face and movement of Withers, who nailed songs like “The Bear, the Tiger, the Hamster, and the Mole” and “Patterns”. This brings us to David Zack, who had the unfortunate 🙂 chore of being the third girl in “Three Friends”, and was just great. One could empathize with him in “One of the Good Guys”, and his performance in “What Am I Doin'” was just great.

As I hinted above, the musicians were performers as well (in addition to how well they handled their instruments). Corey Hirsch (FB) did a wonderful and touching (singing) solo on “If I Sing”; and although he didn’t utter a word, Brenton Kossak (FB) just blew everyone away in “Back on Base” — both in how he worked the strings and how he reacted (or didn’t) to Withers’ performance.

Closer Than Ever continues at Hollywood Piano until March 15. Simply put: Go see it. Tickets are available through Good People Theatre; discount tickets may be available through Goldstar and LA Stage Tix. Note: During the production, Janet let skip what GPT’s production for the Fringe Festival is going to be: Stephen Sondheim’s Marry Me a Little. We’re in :-).

GPT is an example of one of Los Angeles’s many intimate (99 seat and under) theatres. It is also an example of a theatre that might be drastically hurt or changed if a proposal from Actors Equity to establish a new contractual approach for 99 seat theatre in LA comes to pass. This production had to negotiate with Equity regarding the performance space (as it was a new space), and three of the four actors are Equity. Given the ticket sales (it looks like many tickets are half price), I doubt the show could break even if it had to pay minimum wage for 3 hours for each Equity performer per performance (that’s $108 per performance) plus rehearsal costs. There’s massive agreement that the current 99 seat approach with minimal stipends is inadequate, and there’s a strong push for a tiered system based on the budgets of the show and theatre. But to move there, AEA’s proposal must be voted down. As was said in this show, “there is no ‘there’ there” — it won’t take us to a productive place. If you are an Equity member, I urge you to study the issue at the iLove 99 website (FB) and hopefully vote “no”. If you are a non-Equity actor, producer, or other creative, I urge you to let your Equity friends know about this, and to educate your professional groups about the issue — and to take a stand. For us audience members, you need to be aware that the 99-seat theatre you love (and can afford) is threatened. Spread the words, and let the actors know you support their working in 99 seat theatre. Let them know you will follow good acting and good performance at whatever venue it is made. #Pro99 #LAThtr #ILove99

Upcoming Shows: Next weekend has no theatre, due to other commitments (the MRJ Man of the Year dinner on March 7, and a Purim Carnival at TAS the next day). Theatre in March starts the next weekend with  “Carrie: The Musical” at La Mirada Theatre for the Performing Arts (FB) on March 14, a “Drowsy Chaperone” at CSUN on Friday March 20, “Doubt” at REP East (FB) on Saturday March 21, “Newsies” at the Pantages (FB) on March 28, followed by Pesach and the Renaissance Faire on April 11. The following weekend will see us back at a music store listening to a performance: this time, it is Noel Paul Stookey at McCabes Guitar Shop (FB). After that we’re in Vegas for a week — I haven’t yet determined the shows yet, but Menopause the Musical looks quite likely. We may also work in “After the Revolution” at the Chance Theatre (FB). May begins with “Loopholes: The Musical” at the Hudson Main Stage (FB) on May 2. This is followed by “Words By Ira Gershwin – A Musical Play” at The Colony Theatre (FB) on May 9 (and quite likely a visit to Alice – The Musical at Nobel Middle School).  The weekend of May 16 brings “Beer for Breakfast” at REP East (FB). The weekend of May 23 brings Confirmation services at TAS, and also has a hold for “Love Again“, a new musical by Doug Haverty and Adryan Russ, at the Lonny Chapman Group Rep (FB).  The last weekend of May currently has a hold for “Fancy Nancy” at the Chance Theatre (FB) and “Waterfall“, the new Maltby/Shire musical at the Pasadena Playhouse (FB).  June is equally crazy, as we’ve got the Hollywood Fringe Festival amongst other things. As always, I’m keeping my eyes open for interesting productions mentioned on sites such as Bitter-Lemons, and Musicals in LA, as well as productions I see on Goldstar, LA Stage Tix, Plays411.