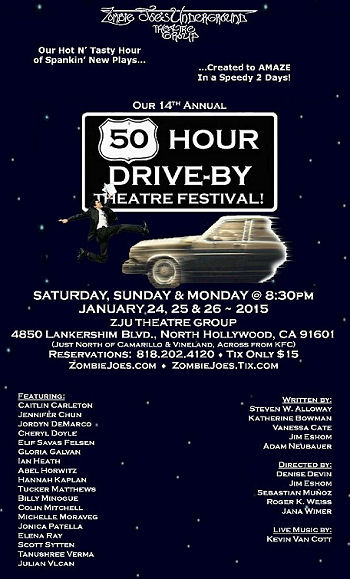 I’m not very adven­turous when I go to the theatre. If you’ve been reading my write-ups over the last 10 years, you’ll find they are pretty much positive, because I tend to see productions that have either been reviewed well in Los Angeles, or have gotten good reviews in other cities. I do see new works (especially from places like The Colony Theatre (FB)), but even then those plays have typically been extensively workshopped and dramaturged to perfection.

The downside to all this, however, is that I miss the creative energy. I see the end result, far removed from the burst of creativity and the true exercise of the acting muscle. I do rarely take the risk — when I do, sometimes it works and sometimes it doesn’t.

Last night, the presence of someone I’ve been wanting to meet on stage (Colin Mitchell of Bitter Lemons) drew me out of my cocoon of safety: he was onstage as part of the 50 Hours Drive-By Theatre Festival at Zombie Joe Underground (FB). I’ve heard of these efforts before — I know the Blank Theatre does one — but never experienced it. The closest I’ve come to the creative energy side was the Solo-palooza effort at REP after the Spring Debacle, an outgrowth of product of the “Theatre 195: Solo Performance” class at the College of the Canyons. In this program, students from the class present original solo performance pieces that have been curated with COC theatre instructor and Solopalooza director Susan Hinshaw (FB) to be both socially provocative and highly entertaining.  I found that effort fantastic.

Guess what? I loved the ZJU 50th Drive By as well.  Here’s how the process works:

This is totally unlike what I normally see, and I found it wonderful and full of energy. Not everything works, but that’s what happens when you’re on a high-wire without a net. The resulting production consisted of 5 approximately 20 minute plays (because everything at ZJU is one hour long):

Meet the Susans. (Written by Katherine Bowman (FB), Directed by Jana Wimer (FB)). This playlet told the story of three women, all named Susan Johnson, who are all married to members of the armed forces… who all have the same first name. It takes place at the birthday party for Susan Enise Johnson [Elif Savas Felsen (FB)] (the other Susans are Susan Danna [Tanushree Verma (FB)] and Susan Mary [Michelle Moraveg/FB]). An Air Force Captain (Betty [Caitlin Carleton (FB)]) arrives, with the usual bad news announcement that Michael Johnson has died. However, it is unknown which husband it is. Betty is invited to stay at the party, and the usual party drama occurs with the goal of delaying opening the envelope. During this, it is that Betty is in love with Susan Mary Johnson. It ends when all four decide to open the envelope together, and… blackout.

This playlet was generally entertaining, but didn’t really end up with anything larger in the end (i.e., it didn’t really go anywhere). Being someone who works with the Air Force, I found Carleton’s costume distracting (normal USAF cap with captains pin, white blouse, bloused tie (only the Marines do that), black skirt (should be blue), and patterned stockings (plain neutral per regs)), although her performance was good. I also enjoyed Verma’s performance and her movement with the pregnancy belly.

Patient 99. (Written and directed by Jim Eshom (FB)). This playlet was about an unknown cooperative patient, Patient 99 [Hannah Kaplan/FB], one thousand years in the future. Two doctors, Dr. X [Jordyn DeMarco (FB)] and Dr. Z [Ian Heath (FB)] are trying to get her to cooperate and use her artifact to channel the voice of the prophet. She keeps becoming more and more uncooperative. Eventually, they devise a plan to bring in her sister, Dahlia [Cheryl Doyle/FB] to bond with her (both had been snatched at the same time, while watching Mrs. Doubtfire). They inform her they will send her sister back if she cooperates, and she gives in. The playlet ends with her activating the device.

This play exhibited a little more growth in its characters, particularly in Patient 99 (and I quite enjoyed Kaplan’s performance here). Doyle was also quite good as 99’s clingy sister, and there was good interplay between the two doctors.

Half of Infinity. (Written by Steven W. Alloway (FB), Directed by Sebastian Muñoz (FB; Page)). This was basically a Frankenstein story about Frank [Colin Mitchell (FB)], an outcast who basically couldn’t get any woman to be interested in him. So he builds himself a girlfriend by stealing the face and body of Elsa Lancaster, a breast cancer patience. However, after Elsa [Elena Ray (FB)] is revived, she’s less interested in Frank and more interested in finding out who (not what) she is. Complicating this is the fact that Frank’s assistant, Ygritte [Gloria Galvan/FB, who I’ve seen before and liked in both CSUN’s Tommy and ZJU’s Christmas Carol] is really in love with Frank, but Frank is too love blind to see this. The implication, which could be due to casting, is that this blindness comes from the fact that Elsa fits the current perception of what beauty is, whereas Ygritte is a larger woman (but still quite sexy). As the scene closes, Frank finally realizes Ygritte’s attaction to him.

I liked this playlet a lot. It was cute, well performed, and I liked the interplay between all of the characters. I thought the reference to Elsa Lancaster, who played the original Bride of Frankenstein, was nice.

The Original. (Written by Adam Neubauer (FB), directed by Roger K. Weiss (FB)). This was a dark story about a group of three — Argus [Abel Horowitz (FB)], the Nemesis [Tucker Matthews (FB)], and Themis [Jennifer Chun/FB] who were hunting down clones of Attis [Billy Minogue (FB)] to eventually find and kill “the original”. Argus had odd glasses that could see the clones, the Nemesis could kill without remorse when wearing a mask, and I can’t remember Themis’s specialty. Eventually, they find Attis, and Themis kills him.

This was my least favorite of the piece. The story was relatively violent, and there was no real growth of characters. There was no one for the audience to sympathize with, and it just seemed like an excuse to use the props. I did like Matthew’s portrayal of the Nemesis.

Forever. (Written by Vanessa Cate (FB), directed by Denise Devin (FB)). This was the story of a love triangle at a reunion. We first meet the girl, Amira Kay [Jonica Patella (FB)], who encounters Jules [Julian Vlcan (FB)]. She has no interest in Jules, although he is clearly in love with her. Her interest is in Alex Mathers [Scott Sytten/FB]. Mathers, however, wants no part of Amira — he’s interested in Jules. Essentially, what we have here is a very cute and touching love triangle of girl loves gay guy who loves straight guy who loves girl, and the very humorous playlet addresses their coming to the realization that if they can’t have who they want, having the triangle will suffice.

This was very well performed, and was perhaps my favorite piece of the set. It was touching and funny and the characters were well drawn out. All of the performances were delightful, and there was an odd sensibility about the piece that set it apart from the rest. I’ll note that this piece and the Susan’s piece were the only one’s written by women.

Of the five pieces, I think my favorites were Half of Infinity and Forever. Patient 99 was second. Meet the Susans was third. My least favorite was The Original.

Overall, truly admired the creativity — this is a different type of theatre than what one sees when one goes for the known authors and known works, or even the new authors when their product is of the traditional style (90 minute-120 minutes, 1-2 acts). This is much more theatre on the edge, and the creativity is invigorating. As with acting, this is not something I can do. I can be creative and come up with a solution to a problem quickly, yes… but writing it as a play, blocking and laying it out, rehearsing and memorizing it is beyond me. Powerpoint charts — no problem (in my area of expertise). But for those who can create like this… I salute them.

Turning to the technical… umm, what technical? ZJU has minimal sets, and the lighting is a bunch of par lights with nary a Leko in the bunch. Jeri Batzdorff (FB) and Zombie Joe handled the props. The production manager was Adam Neubauer (FB) and Zombie Joe, together with Ellen Runkle. Music was by Kevin Van Cott (FB). The 50 Hour Drive By was produced by Zombie Joe.

The last performance of the 50 Hour Drive By (for this year) is in about an hour. Better run fast and hope they have tickets.

Upcoming Shows: The last weekend of January concludes with the Cantors Concert on Sat January 31 at Temple Ahavat Shalom, followed by a concert performance of the musical Redhead at Theatre West (FB).  February and March pick up even more. We have a Bat Mitzvah on Saturday, February 7, so there may not be theatre that weekend (but who knows). The next week brings two shows: “Loch Ness” at the Chance Theatre (FB) on February 14 and “The Threepenny Opera” at A Noise Within (FB) on February 15. The weekend of February 21 is open; I’m hoping to find discount tickets for Saturday for Chavez Ravine at the Kirk Douglas. February closes with “The Road to Appomattox” at The Colony Theatre (FB) on February 28. March is equally busy, with the MRJ Man of the Year dinner on March 7, “Carrie: The Musical” at La Mirada Theatre for the Performing Arts (FB) on March 14, a hold for “Drowsy Chaperone” at CSUN on Friday March 20, “Doubt” at REP East (FB) on Saturday March 21, “Newsies” at the Pantages (FB) on March 28, followed by Pesach and the Renaissance Faire on April 11. Other than the Faire, April is pretty much open. Additionally, there’s a Marcy and Zina concert at Pepperdine on Tuesday, February 3; alas, as it is a weeknight, I probably won’t make it. As always, I’m keeping my eyes open for interesting productions mentioned on sites such as Bitter-Lemons, and Musicals in LA, as well as productions I see on Goldstar, LA Stage Tix, Plays411.