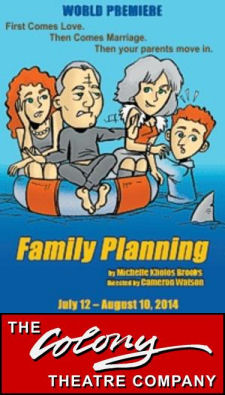 What’s a young adult family’s worst nightmare? Losing your job? No, you can start over. How about your parents moving back in with you, to live, for an unspecified period of time? That’s truly scary. That’s also the basic premises of the comedy “Family Planning” by Michelle Kholos Brooks (FB) in its last weeks at  The Colony Theatre (FB) in Burbank, which we saw last night.

“Family Planning” tells the story of Sidney (Dee Ann Newkirk (FB)) and Michael (Jack Sundmacher (FB)). Sidney is an artist who is working from home; Michael is an unspecified businessman who has recently quit his regular job to start a new Internet business. They have the freedom to do this because, after Sidney’s parent’s divorced, they didn’t sell the family house in Westchester County, NY. Instead, after renting it for a bit, they offered it to Sidney and Michael to live in. However, there appear to be strings. After some setbacks (which I won’t disclose because they are part of the humor), Sidney’s father, Larry (Bruce Weitz) has moved back in with them. After years of being a hard-driving businessman, Larry has gotten into yoga and all that goes with it. As the story begins, Sidney and Michael are attempting to have a little, ummm, adult fun in the living room while the “visitor” in the back of the house is asleep. They are interrupted (because, as Teenagers from Outer Space notes, sex isn’t funny, but frustration is) by a knock at the door. It is Diane (Christina Pickles (FB)), Sidney’s mother, who has suddenly come back home leaving her 2nd husband behind in Birmingham AL. At this point, Larry comes out, and the two of them start going at it tooth and nail.

That’s the setup, and there are loads and loads of humorous details as the story swiftly (90 minutes, no intermission) moves towards its resolution. I won’t spoil the story with the details, but suffice it to say that the situation rang true. We’re currently dealing with a parent in assisted living, and we could just imagine the horror if she had to move in with us. I know others in the same situation… so much so that I truly appreciated the line “You’re truly sexy when you’re thinking homicidal thoughts about your parents.”.

Normally, I don’t laugh out loud at shows — even comedies. Often the comedy is predictable, or the jokes are mundane or obvious. This show was different: there were numerous laugh-out-loud moments with unexpected twists and turns. The ending, of course, is predictable: the situation must be reconciled. The journey to get there is a hoot. Cameron Watson (FB), the director, did an excellent job at keeping the story moving forward, and making the characters behave and interact in a realistic fashion. There wasn’t a minute where I felt the show was dragging.

As I noted, the performances were quite believable — and you could tell the actors were having fun with this. Dee Ann Newkirk (FB) and Jack Sundmacher (FB) were a believable couple with good chemistry; the nuances of their behavior made this very believable. Bruce Weitz and Christina Pickles (FB) were also believable as the parents. For the most part, their behavior was also belivable; alas, there were a few line hesitations that shouldn’t have been there the penultimate week of the run. They weren’t enough to be a problem, but they were like the occasional “pop” in a vinyl LP — just a little distracting.

The scenic design was spectacular. David Potts outdid himself in creating a believable suburban house (with supporting scenic art by Orlando de la Paz. John McElveney (FB), as usual, did the set dressing and properties design, and I felt bad at the quantities of props this show must go through (and the clean up afterwards). The costume design was by Kate Bergh, and seemed to reflect that age and disposition of the people wearing them. The sound design was by Steven Cahill (FB), who outdid himself with the wonderful scene-interstitial music. Lighting was by the resident Colony lighting designer, Jared A. Sayeg (FB), and established the mood quite well. Dale Alan Cooke (FB) was the Production Stage Manager.

“Family Business” continues at the Colony for one more week, until August 10th. Tickets are available from the Colony Box Office online.

Upcoming Theatre and Concerts:  August continues with “Family Planning” at The Colony Theatre (FB) on 8/2. This is followed by “Buyer and Cellar” at the Mark Taper Forum on 8/9, and “Broadway Bound” at the Odyssey on 8/16 (directed by Jason Alexander). I’m also thinking about a new musical, “It Happened in Roswell: An Intergalactic Musical” at the No Ho Arts Center on Sunday, 8/17. The following weekend we’ll be on vacation in Escondido, where there are a number of potential productions… out of the many available, we have picked “Two Gentlemen of Verona” at the Old Globe on Sunday, 8/24, and “Pageant” at the Cygnet in Old Town on Wednesday, 8/27.  I’ll note that what they have at the Welk (“Oklahoma“), Patio Theatre (“Fiddler on the Roof“), and Moonlight Stage (“My Fair Lady“) are all retreads and underwhelming. August will end with “An Adult Evening of Shel Silverstein” at REP East (FB). September is filling out. So far, the plans include “Earth/Quaked starring Savion Glover” as part of Muse/ique in Pasadena on Sun 9/7,  “Moon Over Buffalo” (Goldstar) at the GTC in Burbank on Sat 9/13, “Bat Boy: The Musical” at CSUN for the Friday night before Slichot (9/19), “The Great Gatsby” at Repertory East (FB) on Sun 9/21,  “What I Learned in Paris” at The Colony Theatre (FB) on Sat 9/27. October, so far, only has one show: “Pippin” at the Pantages (FB) on 10/25, although I’m looking at “Don’t Hug Me, We’re Married” at the Group Rep (FB) for either Sat 10/11 or Sat 10/18 (when Karen is at PIQF). November is back to busy, with dates held or ticketed for “Big Fish” at Musical Theatre West (FB) on Sat 11/1, “Handle with Care” at The Colony Theatre (FB) on Sat 11/8 (shifting to avoid ACSAC), a trip out to Orange Empire Railway Museum to see my buddy Thomas on 11/11,  “Sherlock Holmes and the Suicide Club” at REP East (FB) on Sat 11/15, the Nottingham Festival on Sun 11/16, and “Kinky Boots” at the Pantages (FB) on Sat 11/29. As for December, right now I’m just holding one date: “She Loves Me” at Chance Theatre (FB) in Anaheim on 12/20. As always, I’m keeping my eyes open for interesting productions mentioned on sites such as Bitter-Lemons, and Musicals in LA, as well as productions I see on Goldstar, LA Stage Tix, Plays411.