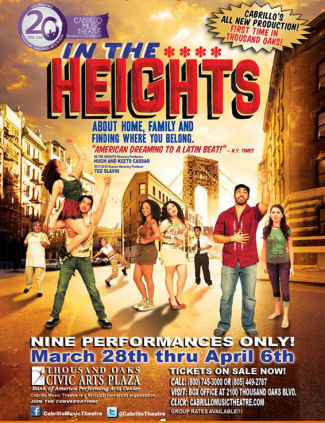 Back in 2010, I made my first visit to Washington Heights. Although the touring production of “In The Heights” at the Pantages might have been good, I had so much trouble with the accents and the sound that I couldn’t understand anyone. As a result, it was a scenic mess. So I was pleased when I learned that Cabrillo Music Theatre was launching one of the first regional productions of “In The Heights“. We went there last night, and I’m pleased to say to say that this is one of the strong productions I’ve seen out of Cabrillo in over 10 years of shows there. Further, it had a spectacularly energized audience with a new demographic. That’s a win-win. If you have the opportunity to get out to Cabrillo Music Theatre (FB) to see this afternoon’s final show, do it. It is well worth it.

“In The Heights”  (book by Quiara Algría Hudes (FB), music and lyrics by Lin-Manuel Miranda (FB)) is primarily the story of Usnavi, an immigrant from the Dominican Republic who runs a bodega in Washington Heights, a barrio in New York. Usnavi is not the only character: it is the story of Usnavi’s assistant; the story of the Rosario family who run a taxi service, and whose daughter, Nina, has just dropped out of Stanford; and the story the salon next to the bodega: the owner Daniela, her friend Vanessa. It is also the story of Abuela Claudia, who immigrated from Cuba and has served as grandmother to Usnavi. When Abuela wins $96,000 in the lottery, we see how the money affects the life of this community. The website for the show describes this generally as follows: In the Heights tells the universal story of a vibrant community in Manhattan’s Washington Heights – a place where the coffee from the corner bodega is light and sweet, the windows are always open, and the breeze carries the rhythm of three generations of music. It’s a community on the brink of change, full of hopes, dreams and pressures, where the biggest struggles can be deciding which traditions you take with you, and which ones you leave behind. If you read the full synopsis, you’ll see this is a complicated interwoven story. This is a story where it truly helps if you can hear the words of the dialogue and songs. The Pantages blew it in 2010. Cabrillo, on the other hand, was spot-on.

It is important to note, however, that the success of the Cabrillo production is due to much more than the sound quality. It was a combination of the elements, from the lead players to the ensemble, from the direction to the choreographic team, from the quality of the (imported) set to some of the best spot usage I’ve ever seen at Cabrillo. Speaking of spots, let me highlight some of what I loved.

Let’s start with the background, for they are part of what makes this show. This is one of the strongest ensembles I’ve seen in any Cabrillo show. Under the strong direction of Morgan Marcell (FB), who also recreated the original Broadway choreography of Andy Blankenbuehler (FB) (with the help of José-Luis Lopez (FB) as Associate Choreographer), the ensemble was always moving. They were in the background, filling the barrio with people going about their daily business. They were dancing — spectacularly I might add — in a style that wasn’t your stereotypical musical. They were all shapes and sizes, because real life doesn’t look like the world portrayed in magazines. They were interacting with the main characters — not necessarily with words, but with movement. In short, they were a joy to watch. It is hard to pick favorites, but one that kept catching my eye was Natalie Iscovich (FB).  It wasn’t just her movement (which was great); it wasn’t just her look (which seemed unique to me). I think it was the joy of her interaction and the fun she was having that drew the eye too her; she just seemed to really be into it and that fun projected out. But my calling her out does not mean the rest of the ensemble were phoning it in. To the contrary, they all seemed to be inhabiting and enjoying these characters; this joy in the background just brought this musical to life. The remainder of the ensemble consisted of Marcos Aguirre (FB), Risa Baeza/FB, John Paul Batista (FB), Charlotte Chau-Pech/FB, Ariella Fiore (FB), Javier Garcia/FB,  Andrew Retland/FB, Tiago (FB), Shaun Tuazon (FB), and Elizabeth Maria Walsh (FB).

Now let’s turn to some of the lead players — again, all were very strong. In the lead position was Lano Medina (FB) as Usnavi. Lano handled the hip-hop dialogue very well — although at times a little fast for these ears to pick up. Good singing voice, and a wonderful performance. Perhaps even more impressive to me were some of the female leads — in particular, Ayme Olivo (FB) as Nina, who just blew me away with the beauty and power in her clear voice. Also strong was Rachae Thomas (FB) as Vanessa — yet again, another strong strong voice.

The supporting named characters were also equally strong, and each had their moment to shine. Again, you could see that they were all truly enjoying this show and having fun with these characters. That’s such an important thing — actors shouldn’t look like they are acting — they need to inhabit and become one with their characters, and then they just shine with that joy and their performance hits it home. This is why it is so hard to single out any of the supporting performances. I can easily think of moments where each just shone. The supporting characters were Frank Atuhello Andrus Jr./FB (Benny), Jonathan Arana (FB) (Piragua Guy), Tami Dahbura (FB) (Abuela Claudia), Anna Gabrielle Gonzalez/FB (Carla), Chala Savino (FB) (Daniela), Benjamin Perez (FB) (Kevin Rosario), Celina Clarich Polanco (FB) (Camila Rosario), and Robert Ramirez/FB (Sonny).

Musically, In The Heights has a wonderful Latin-flavored score with lots of energy.Under the musical direction and leadership of Brian Baker/FB, the 14 piece orchestra did a great job, although I wished at times for a bit more volume or energy (but, more like, I was spoiled by the cast recording). Darryl Archibald (FB) was the music supervisor, and Darryl Tanikawa (FB) was the music contractor. [ETA: Another review I read noted that the tour at the Pantages only had a 9-piece orchestra; this was the first time since the original Broadway production that the full score was used.]

Turning to the technical side. The sound design by Jonathan Burke (FB) was excellent — this show is so much better when you can actually hear what the actors are saying and singing. The Pantages needs some schooling on this, but they are getting better. The lighting design by Jean-Yves Tessier was excellent (and he has one of the best bios around), I was even more taken by the use of the spots (which for a change were neither overdone nor the standard white spots). The set was not developed by Cabrillo but came from Port City Equipment Rentals in Charleston SC (another review I read clarified these were the original Broadway sets). Props were by Alex Choate. The costumes were originally designed by Colleen Grady for the Walnut Street Theatre in Philadelpha PA. This wardrobe was supervised by Christine Gibson, with Cassie Russek (FB) doing the hair and makeup design. Gary Mintz was the technical director. Brooke Baldwin/FB was the production stage manager, and Anthony Sierra/FB was the assistant stage manager. Cabrillo Music Theatre (FB) is under the artistic direction of Lewis Wilkenfeld (FB).

Today is the last performance of In The Heights at Cabrillo Music Theatre (FB). You can likely get tickets through the Thousand Oaks Civic Plaza box office.

At the beginning of this post I mentioned the audience. This audience was the largest I’ve ever seen at a Cabrillo show. More importantly, it was younger than the typical theatre audience — this show — and its publicity — reached out and touched a nerve in Ventura County. This is a good thing, and I hope this brings in a lot of new subscribers to Cabrillo. The quality of the show certainly made me think about resubscribing. Alas, it wasn’t quite enough to overcome the hurdle of the mix of shows (all of which I’ve seen recently), and the fact that my wife and mother-in-law can no longer handle the stairs to our sets (so I usually sit apart from them — they’re in the last row, and I’m in our seats in row B).

Upcoming Theatre and Concerts:  Next weekend is brings “The Tallest Tree in the Forest” at the Mark Taper Forum on April 12. The following weekend brings a benefit at REP East (FB): “A Night at the Rock Opera“. The last weekend of April will bring Noel Paul Stookey at McCabes, as well as the Southern California Renaissance Faire. Current planning for May shows “The Lion in Winter” at The Colony Theatre (FB), and “Cat on a Hot Tin Roof” at REP East (FB), as well as “Hairspray” at Nobel Middle School. I may also be scheduling “Porgy and Bess” at the Ahmanson. June is mostly open pending scheduling of an MRJ meeting, but I will try to fit in as much of the Hollywood Fringe Festival as I can. As always, I’m keeping my eyes open for interesting productions mentioned on sites such as Bitter-Lemons, and Musicals in LA, as well as productions I see on Goldstar, LA Stage Tix, Plays411.