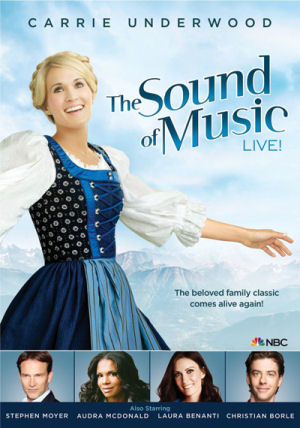 We tend to look back on the past through rose colored glasses. We think travelling by plane in the 1950s and 1960s was so much more elegant and refined than today’s cattle cars, but it really wasn’t. Similarly, we look back on the “Golden Age” of Television — live TV from the 1950s and 1960s — as something special, but it really wasn’t. Sets weren’t fancy, performances were hit or miss, and there were numerous imperfections (anyone who has watched rebroadcasts of the live Peter Pan will remember it). But through the rose-colored glasses of time it seems better, and so NBC tried to capture that magic last night with a live production of “The Sound of Music“, starring Carrie Underwood, Stephen Moyer, Audra McDonald, Christian Borle, and Laura Benanti. Although I only meant to watch 20 minutes, I ended up watching the whole thing. In short, I thought it was a reasonable effort — it was imperfect, but it wasn’t unwatchable. Here are some short comments regarding the production — certainly not a full review as I don’t have the time (further, I don’t think you need the full review treatment).

First and foremost, this was a remake of the stage production, so all you Julie Andrews-loving, Carrie Underwood-hating people out there… shut up. It is wrong to compare this to the movie, which used a rejiggered script with songs in different places, and had the money and time to get perfect scenery and to retake and retake until it was just right. This production, although rehearsed, was a single live take that could not be redone. Comparing it to a full movie is apples and oranges. Compare it to other stage productions or equivalent live stage musicals on TV. [I’ll note that most of the “hating” reviews I’m seeing are upset that this wasn’t their benighted movie, believing that the movie is the musical. The stage production existed for years before the movie.]

That said, the production had a very 1950-ish feel to it. Although this was a remake of the stage production, it didn’t feel like a stage production — it felt like an odd hybrid with much more elaborate sets that were obviously on sound stages, but that lacked the framing limitations of the proscenium arch. Stage productions often use simple sets that permit you to use your imagination. Here, the realism of the sets made you wish for the movie and its larger scenery, but the limitations of the sound stage and the live nature of the performance (which limited camera angles and cutting) amplified the artificial nature. This was common for 1950s and early 1960s TV, but is completely uncommon to today’s audience.

The larger problem with this production was the casting and direction. Each of the lead’s casting was wrong in various ways…

Audra McDonald had the perfect voice for the Mother Superior, and she played the role with class and style. Of course, historically, the casting was incorrect and thus felt off, but her performance more than made up for it.

Carrie Underwood wasn’t the train wreck many made her out to be. Her singing was strong, and I had no problem with her voice or accent. I certainly (and perhaps this is heresy) preferred her to the lilt Mary Martin always had. People forget that Julie Andrews did Maria with an English accent (as did Sally Ann Howes), Mary Martin had some Texas twang in her voice, and other brought vaguely American accents. There’s no correct accent for Maria (unless someone does Austrian). However, she wasn’t the best Maria that I’ve seen (and I’ve seen a few — most recently Shannon Warne in the 2011 Cabrillo Music Theatre production (who was excellent), but also the earlier Cabrillo production with Christina Saffran Ashford, the 1978 Los Angeles Civic Light Opera (LACLO) production with Sally Ann Howes, and the 1972 LACLO production with Florence Henderson), but she certainly wasn’t bad in the role. She had a youthful enthusiasm that was fun to see, and I’m sure she would have improved in the role if she was performing it 8-shows a day for a few months. But this was her first major acting performance after just a little rehearsal, and so there were a more than a few wooden moments. But she remembered all of her lines, and never expressed contrary emotions. How much the wooden-ness was due to the director, as opposed to the actress or a lack of chemistry with her other main lead, I’m unsure. Certainly the director could have helped her more during rehearsals. But still, not that bad. My major complaint was more that she was the same size as some of the children, which was jarring.

As an aside: Could the director have chosen someone better for the role? Most assuredly. Would that choice have been the same draw, and pulled in the same audience to see if she could pull it off? Quite likely not. From the point of view of the network, which was more important: Having quality actors that those “in the know” would tune in to watch, or having actors with a greater risk of failure and thus getting a larger audience to see them fail? Do I really need to answer that question? This is television, where ratings trump quality every day. If you want quality entertainment, television is not your first choice. It exists, yes, but it rare and doesn’t get the ratings, and is more likely found on specialty channels than legacy broadcast networks. This production did exactly what the network wanted: it drew ratings, and probably sufficient ratings for them to attempt a stunt like this again. Given the dearth of theatrical musicals and variety on the major networks, this is not a bad thing. At least NBC is demonstrating itself as a network that at least thinks about theatre.

Stephen Moyer was more of a problem. The Captain required more seasoning given the character’s history, and Moyer did not convey that seasoning, nor did he have the strength of voice of a Theodore Bikel or others I have seen in the role, such as Edward Mulhare. Another problem was that he had little chemistry with Underwood’s Maria. Underwood-haters are quick to blame this on Carrie Underwood and her acting. However, I’m more inclined to blame in on Moyer — Underwood had spunk and was appealing, if not perhaps too upbeat. Moyer just didn’t seem to click with her.

Christian Borle, although a great actor, was just off (to me) as Max. He played it much more comically, and came off much more gay than I’ve seen in other portrayals (especially when compared to someone like Werner Klemperer). He seemed unrealistic. This, I believe was a directoral problem, as his singing was great. I’ll note that most reviews I’ve read praised Borle in the role. He performed well, but had notes in his performance that seemed untrue to that character at that time. As an aside, I saw a recent article on Kveller about things you never think about during this musical, and one was Max. He was obviously both gay and Jewish, and just let a war hero escape the country. He didn’t have a happy future in the 3rd Reich.

Laura Benanti was perhaps the best casting in a role that always comes off as wooden and stiff. She did attempt to bring life to the role and interacted well with the rest of the cast. She had more chemistry with Moyer, and perhaps might have been better as Maria (after all, IIRC, she has done Cinderella on Broadway… and has done Maria in one of her first Broadway shows). But she wouldn’t have drawn the eyeballs — outside of the theatre community, few have heard of her. Remember: Her presence didn’t save the one series she was in.

Most of the children worked reasonably well — I still remember the lovely interplay of Maria and Leisl in the final reprise of “Sixteen Going On Seventeen” — but poor little Gretl was just miscast. She was cute, but she really couldn’t sing.

One last problem: Live performances… and even more so live stage performers… feed off the response of the audience and their reactions. The audience and the performers are a symbiotic whole, and this is what makes live theatre unique. This performance moved from soundstage to soundstage with no audience. This contributed to the stiffness of the production. It is also one reason why movies are different beasts, and 100% faithful adaptations rarely work: the stage production is paced for the stage, with scenes and timings designed for audience reaction and scene changes. Without the live stage and those constraints, the artifice becomes visible and hinders the production. If you want to film a stage production, treat it as a stage production and film a real live performance (even if you invite an audience).

In any case, those are my quick thoughts on the production. I went in planning to only watch 20 minutes, and then catch up on Big Bang Theory, but I ended up watching the entire production. It wasn’t unwatchable, but it wasn’t perfect. In short, it was a great example of what the “Golden Age of Television” was really like, and if NBC tried this again with a different musical, I’d likely watch.