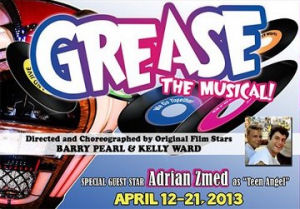 Most people are familiar with the musical “Grease“. You’ve seen the movie or you’ve heard the music; perhaps you’ve even seen a production. I know that I am — I’ve seen the movie, have three different versions of the cast album on my iPod (1972, 1994, 2007) … plus the movie, and have seen increasingly professional productions over the years (including the excellent Nobel MS production and the less excellent Van Nuys HS production). Last night we added to our roster the strong regional production at Cabrillo Music Theatre. This production was very good, but it also illuminated some things about Grease that I hadn’t noticed before. Let me elaborate.

One problem with being so familiar with the property is that they all start to blur in one’s head. This isn’t helped by the various versions out there blurring things. The production at Nobel MS, for example, combined a number of scenes and songs from the movie with cuts and edits from the school version. Stage productions over the years have rearranged songs or added movie songs (notably the 2007 revival). Add to this that many people are overly familiar with the movie version, and expect that to be the stage version (I heard that from people sitting around me). Cabrillo’s version was the official licensed version, which is the original 1972 production without any of the revival changes. There are a number of things that worked well in Cabrillo’s production — and a few that didn’t. So let’s look at the production in four areas: book, direction, performance, and technical.

As I alluded too above, most people believe they are familiar with Grease, but that familiarity is with a blurred version in one’s head. Wikipedia provides a good synopsis of the original story, which concerns two groups of quasi-gangs in a 1950s-era Chicago high school. One, the “Pink Ladies”, consists of Betty Rizzo, Frenchy, Jan, and Marty (Beauty); the other, the Burger Palace Boys, consists of Danny Zuko, Kenicke, Doody, Sonny, and Roger. The story concerns the relationship between Zuko and Sandy Dumbroski, a girl Danny met over the summer at the beach. Sandy shows up unexpectedly at Rydell High, and Danny must balance being cool with his friends and the “good girl” he wants. Sandy, meanwhile, is integrating into the Pink Ladies, and dealing with the clash of lifestyles and morals. Other characters in the story include Patty Simcox, the cheerleeder; Eugene, the nerd; and Miss Lynch, the English teacher. I should note that the book, music, and lyrics for Grease are by Jim Jacobs and Warren Casey; Jacobs was in the audience last night.

When Grease premiered on Broadway, it was not received well by the critics, but was loved by audiences. Last night while watching the show, I could see why critics at the time didn’t like it. The music in Grease is an amalgam between traditional musical music that moves the story along and illustrates the inner thoughts and motivations of the characters, and more novelty numbers that serve as a backdrop for something else. Critics hate those backdrop numbers, and last night they screamed out at me as well. For example, if one was to drop “Magic Changes” from the story, not a whit of meaning is lost. Similarly, “Freddie My Love” introduces an aspect of Marty’s character that is never mentioned again, and one could replace “Hand Jive” with a generic 1950s song without the loss of story. On the other hand, some numbers (such as “Sandra Dee” or “Summer Nights” are critical to the plot. One thing that all the music has, however, is fun. The score is something that is just fun to listen to (and Cabrillo’s production is strong in this regard, as they always have an excellent orchestra). However, the book is beyond our ability to change — and I know that many of the changes that have been done to integrate movie material haven’t significantly improved the book.

Normally, one is not aware of the direction of a show. The skills of the actors combine with the skills of the directors to make the portrayals realistic; just like the sound design, the direction blends into the background and the show becomes a harmonious whole. Occasionally characters will burst out into song, but this is part of the suspension of disbelief one sees in the musical theater (and something directors fight when turning a musical into a movie). This production of Grease was directed by Barry Pearl and choreographed by Kelly Ward. For the most part the direction and dance worked well, but there were some puzzling choices. The first — and the most jarring for me — was the decision for many of the musical numbers to have the actors grab large wired microphones for the musical numbers. These were unnecessary for either sound design or the story, and their use served only to distract. It would be much better — and more realistic — if the use of such microphones would have been only where they would be used in real life. The second jarring decision was the casting for Cha Cha. Not the actress — who was great — but the decision to make the character (described in the script simply as “homely “) be fat and slovely. I don’t recall this choice from any version I have seen — usually Cha Cha is more homely in spirit and behavior and not particularly overweight. When this choice for Cha Cha is combined with the script’s behavior for Jan and Roger, there is a bit more size-ism in the production than I feel is necessary.

Other than those choices, the direction and movement worked reasonably well. I particularly liked how the various couples were highlighted during the “Hand Jive” (although I wish Cabrillo had augmented this number with more dancers — I’m sure they had teen kids that would love to be on stage, and it would have made it more of a real high school dance). I also enjoyed the enthusiasm brought out in the cast during “We Go Together”, and the emotion brought out during both “Alone at a Drive-In Movie” and “There Are Worse Things I Could Do”.  The staging of “Beauty School Dropout” (the Teen Angel number) was cute, although not all of the irony of the words of the songs came out in the angel’s performance.

As usual, the cast was very very good. In the lead positions were Michael Cusimano (FB) and Natalie MacDonald/FB as Danny Zuko and Sandy Dumbrowski. Both were great performers and had strong singing voices, and this made a wonderful Cabrillo debut for both. The remainder of the “Burger Palace Boys” consisted of Harley Jay* (FB) (Kenickie), Nick Tubbs/FB (Doody), Ryan Quick/FB (Roger) and Nick Bernardi/FB (Sonny). All were good; there were standout performances by both Jay and Quick. I particularly enjoyed Jay’s voice, and the personality of Quick in his interaction with Jan. Speaking of Jan, the “Pink Ladies” consisted of Katherine Malak* (FB) (Betty Rizzo), Tessa Grady (Frenchy), Claire Bermingham (FB) (Marty), and Kimmy Zolozabal (FB) (Jan). Malak’s Rizzo was very strong in all her numbers, and was particularly touching in “There Are Worse Things I Could Do”. Grady’s Frenchy was also very good; Grady is always fun to watch on the Cabrillo and she did her best to bring some fun to Frenchy. Particularly fun to watch was Zolozabal’s Jan — she brought a lot of fun and enthusiasm to the role, and one’s eye was just drawn to her.

Notables in the remainder of the cast were Veronica Dunne as Patty Simcox, who brought an extreme amount of enthusiasm to the role (including doing cartwheels during the final bows) and Francesca Barletta/FB as Cha-Cha DiGregorio, who projected a memorable personality in what is a small role.  Also notable was Adrian Zmed* (FB) as Teen Angel. Admittedly a cameo role, Zmed had fun with the camp aspects of the song and role, although I wish he had paused a little more for emphasis after some of the musical phrases. Rounding out the cast were Michele Selin (Miss Lynch), Adam von Almen/FB (Eugene Florczyk), Travis Dixon (Vince Fontaine), and Jon Robert Hall (FB) (Johnny Casino).
[* indicates members of Actors Equity]

Lastly, let’s look at the technical aspects of the program. The set was designed by Valley Youth Theatre in Phoenix, AZ, with additional scenic design by Hana Kim. The set left me a little baffled — I couldn’t understand why there was an odd keyboard platform near the top of the stairs, nor why a high school in 1959 would have a big picture of James Dean. The sound design was by Jonathan Burke and (aside from the previously mentioned hand-mic problem) was reasonably good, although there were a few problems during the “Mooning” number with the actor’s mics. Lighting was by Design Partners Inc and Kim Killingsworth, and was for the most part OK. There were some odd transitions, particularly during the opening number when the spot would move from one side to the other (note: the problem wasn’t the switching of the spot; it was the effect during the transition). Christine Gibson was wardrobe supervisor, using costumes from the FCLO Music Theatre. Cassie Russek provided the hair and makeup design. Gary Wissmann was technical director, and the everpresent Allie Roy was the production stage manager (assisted by Morgan Zupanski).

A few notes about the audience at this show. First, the balcony was about half full — this is the best I’ve seen at a Cabrillo show in a long time and was a great thing to see. Alas, much of the audience was addicted to their smart phones. The minute intermission started — boom — out came the phones and there were these little squares of light everywhere. Also, Cabrillo appears to have changed their policy and was allowing food and drink in the balcony. I don’t mind this for the occasional candy bar or cookie or water bottle, but these were bags of chips (crinkling during the 2nd act) and open cups of beer (worries about spillage). I’m not sure this is a wise policy, and I hope last night was an aberration.

Upcoming Theatre and Concerts:   April concludes with a winetasting at Temple Ahavat Shalom. May is busy in a different sense, with two concerts — Elton John in Las Vegas on May 4, and (tentative) Michael Feinstein at VPAC on May 11. May also brings “Falling for Make Believe” at The Colony Theatre and “To Kill a Mockingbird” at REP East. Lastly, continuing the look ahead, June will bring (tenative) “The Scottsboro Boys” at the Ahmanson Theatre, “Priscilla – Queen of the Desert” at the Pantages, and (tentative) Sweet Charity“ at DOMA. July is currently more open, with “9 to 5 – The Musical” at REP East in the middle of the month, and “Legally Blonde – The Musical” at Cabrillo at the end of the month. August is currently completely open due to vacation planning and the potential Nottingham Faire. I’m also keeping my eyes open as the various theatres start making their 2013 season announcements. Lastly, what few dates we do have open may be filled by productions I see on Goldstar, LA Stage Tix, Plays411, or discussed in the various LA Stage Blogs I read (I particularly recommend Musicals in LA and LA Stage Times).