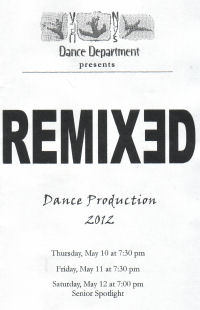 Last night, we went to Van Nuys HS for what will be our last performing arts performance there (most likely). It was the final show for the 2012 Dance Class at Van Nuys, and the final show that our daughter would be in. As such, it was a bittersweet moment. It brought back memories of the first time we came to Van Nuys HS in 2009 to first see their performing arts program. It’s been a journey, and we thank all the teachers that brought our daughter and her friends this far–especially Marque Coy in the technical theatre program, Mike Nakauchi in the dance program, and Randy Olea in the drama program.

On to the show… the show had three acts: a senior spotlight, followed by two normal Dance Production acts. I’m not going to comment on all the performances, just a select few that I particularly remember.

Senior Spotlight. Of course, the highlight of the senior spotlight to me was the program “Georgia”, which Erin choreographed and danced. It is hard to describe — it was a modern interpretive dance — almost primitive. I’ll edit this to add a link to the you-tube of it once it is uploaded. The other performance that I liked was “I Can Be Anything You Like!” by Mayra Martinez and Myelle Bossett (probably because I really liked the music).

Act II. Numbers I liked in Act II included the Senior Dance, cheoreographed by the Jazz and Hip Hop Team Officers and danced by a large number of seniors, “Pink Panther”, choreographed by Jayy Rodriquez, JDT and performed by Alex Geronilla, Layla Chatthoranongsak, Tatyana Saldana, and Natalya Shoaf, “Candy” choreographed by Joseph Cayanan, Aliam Jiles, Diane, Ronamae Septimo and performed by the Hip Hop Dance Team, and the finale “Pure Rock You”, choreographed by Mike Nakauchi and performed by everyone. This act also had another song from Chicago which was performed reasonably well, but I would have preferred if they had done “Hot Honey Rag” and had stronger tap. But that’s just me being a Chicago geek.

Upcoming Theatre, Concerts, and Dance: The remainder of May brings the Spring Railfest at Orange Empire, “The Great American Trailer Park Musical” at REP East, and it may also bring “Follies” at the Ahmanson. Oh, and May also has my daughter’s HS graduation. June is more open, but does feature both “Addams Family” and “Million Dollar Quartet” at the Pantages. July I”ve been keepling light until we know the orientation schedule at UC Berkeley and our vacation schedule. As always, open dates are subject to be filled in with productions that have yet to appear on the RADAR of Goldstar or LA Stage Alliance.