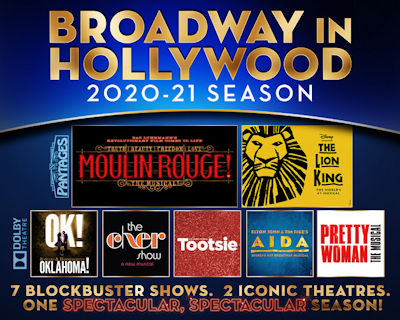 This morning, the Hollywood Pantages (FB), also known as Broadway in Hollywood (FB), announced their 2020-2021 season.  It consists of seven shows, although I’m sure more will be added:

So, here are my thoughts:

First, that’s an awfully long stretch for the Pantages and Dolby to be dark. Hamilton is scheduled to run at the Pantages from March through November 22. But from November 22 2020 through June 2021, there’s nothing seemingly planned for the Pantages. Either a refurbishment is in order for The Lion King, or there is more to be announced.

Similarly, the Dolby is quiet from July 26 (end of The Bands Visit) to November 3. Where are the shows that typically come in during September and October 2020. Oddly quiet. There must be more shows in the works. There are also no shows at either theatre for the lucrative Christmas 2020 season. Oklahoma closes, and the Dolby is dark until March, and the Pantages is dark through June. Really odd.

Also notable are the shows that are missing. Hadestown, of course, is going to the Ahmanson Theatre. But there are other significant shows that have announced tours: The Prom; You’re a Good Man, Charlie Brown; The Lightning Thief;  Ain’t Too Proud ( Going to the Ahmanson); An Officer and a Gentleman (ETA: Going to Broadway in Thousand Oaks). Then there are the musicals that are expected to tour — in particular Beetlejuice. I really expected The Prom (Ahmanson: 20-21), Ain’t Too Proud(Ahmanson: 20-21), and Beetlejuice at the Pantages. Two other tours — although more likely at the Ahmanson — are the Harry Potter play currently at the Curran, and To Kill a Mockingbird (update: Mockingbird has been announced for the Ahmanson). But Broadway in LA doesn’t do plays, although it might make an exception for Harry Potter.

As for what they do have on the season: All are good shows, with only two real retreads. The Lion King hasn’t been around for a while, and it will be nice to see it on stage again. Aida is an interesting choice. Hasn’t been in LA since it was first done at the Ahmanson; we saw it a few years ago in Portland. Hadn’t heard it was being revived and going on tour. The other shows are good, although none bring the big sparks.