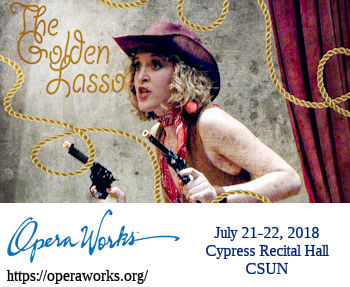 One of the more interesting shows we go to every year is the culmination of the Advanced Artists summer session at OperaWorks (FB). We saw this year’s show last Sunday; the writeup has been delayed due to my preoccupation with the “map project” for my highway pages (this is where I’m adding maps for each highway to that highway’s pages; I’m up to Route 228, as of the time of posting).

Back to Operaworks. Operaworks is a program for up and coming opera singers. They all know how to sing, but being a successful performer in the world of Opera involves much more. Operaworks teaches them that “much more”. It teaches them the business of opera; it also teach them how to perform and interact as a character on the stage. The program that we see is the culmination of that teaching. The class works together to pick a theme for the show. They then create their characters, determine their interactions, and select arias that convey the message of that interaction. These arias are rarely from the same show or the same composer. The result is a new 3-act opera crafted from a mish-mash of arias, with a plot that is often some pastiche of current culture. The performers seem to be having great fun with this creation; it is far from your normal staid opera.

I am certain that the theme for this year’s show was crafted around the class makeup: 24 girls, 1 guy. What better to parody than “The Bachelor”. In this case, it was a web series called “Cow Country Bachelor”, where a single guy, Vinnie Mahal, was the target for a lot of wannabees. The three acts all related to the show: The first act was at the regional auditions for the show; the second act was at a training facility for drag queens being used by the show; the third act was at Vinnie’s mansion where he was making the final selections. As for the title? Instead of a rose, he gives a “golden lasso”.

The characters reflected the creativity of the artists. Here’s a typical character bio to give you an idea:

Gwendolyn Gray is a thirty year old woman in mid-life crisis. She is klutzy, chatty, and unobservant. Her occupation as a chicken sexer is quite demanding, yet she finds time to attend every speed dating event in town. Her biggest fear is matching her clothing day to day.

This year’s show was quite entertaining.

In the first act, we are introduced to a number of different characters who want to be on the show, as well as the producer and wrangler, and a videographer. Memorable characters were Lou Ann, a character who entered the competition drunk; Kathy “Honey” Fayette, who keeps trying to get on the show; and Chastity Bliss White, who had the most unique look of the various characters. Memorable performers, a week out, were Alexandra Logue, Julia Gmeiner, and Suzanne Ramo. Best bios were Harvey Wendell and Angelina Bacciagalupe. Performers, their characters, and their arias were as follows (in performance order); the pianist was Douglas Sumi (FB) (Harvey Wendell):

In the second act, we are at a boot camp for another set of contestants. Memorable characters were Myra Francis Walker, who kept needing higher and higher shoes until she was on stilts; Gwendolyn Gray, who has a hilarious sequence involving waxing; and Dorie Galford, who keeps going after the shoes. Memorable performers were: Gemma Balinbin, Olivia Hacker, and Nina Polachek. Best bios were Linda and Myra Francis Walker. Performers, their characters, and their arias were as follow (in performance order); the pianist was Michelle Alexander (FB) (Sergeant Senta):

In the third and final act, we get to meet the bachelor. We also meet a bunch of injured and bruised contestants, as well as the one woman that our bachelor was hoping would show up. Memorable characters were Clara Belle, who had anger management problems; Nina Mae, the woman of Vinnie’s desire; and Charlotte Ann Weathersby, who had the freedom to speak up. Memorable performers were Vinell Mahal, and Nicole Anderson. Best bios were Charlotte Ann Weathersby and Clara Belle. Performers, their characters, and their arias were as follows; the pianist was again Michelle Alexander (FB) (Sergeant Senta):

Overall, these summer Operaworks shows are entertaining, and you get to see singers learning the business of being characters. It is remarkable to watch. It is also a great way to get a taste of Opera without paying the big bucks for a 3 hour show. I look foward to next year.

The last weekend of July is currently open; it turns out the Muse/ique (FB) show is not that interesting. August starts with Waitress at the Hollywood Pantages (FB) on Saturday, and the Actors Co-Op Too! production of Always Andrews: A Musical Tribute to the Andrews Sisters on Sunday at Actors Co-op (FB). The next weekend brings the last Actors Co-Op Too! production, Twelfth Night, or What You Will at Actors Co-op (FB). There may also be a production of The Most Happy Fella at MTW — I’m not sure about it, but the hold date is on the calendar.

Looking forward to September: The first weekend of September is currently open. The second has a hold date for I Dig Rock and Roll Music at the Rubicon in Ventura. The third weekend has Ain’t Too Proud at the Ahmanson Theatre (FB) on Friday, but the weekend itself is open. The fourth weekend has Rope at Actors Co-op (FB), and the fifth is currently open. Looks like I need to book some dates in September! October is equally open, with only two weekends currently booked, and one with a hold date.