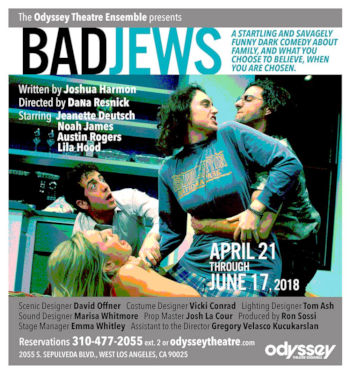 Friday night. I could have been at the synagogue, celebrating Israel’s 70th Birthday. But no, I was at the theatre. I’m a bad Jew.

Conincidentally, that was the title of the show we saw at the  Odyssey Theatre Ensemble (FB) — Bad Jews, written by Joshua Harmon. We missed Bad Jews the last time it was in Los Angeles (at the Geffen, in 2015); this time the timing was right for us to make it (and, coincidentally, another of Harmon’s plays, Significant Other, is currently at the Geffen). The description of the show just made it sound so intriguing:

After a beloved grandfather dies in New York, leaving a treasured piece of religious jewelry that he succeeded in hiding even from the Nazis during the Holocaust, cousins fight over not only the family heirloom, but their “religious faith, cultural assimilation, and even the validity of each other’s romances.”

The story itself is centered around the two Haber brothers, Jonah and Liam, their cousin Daphna Feygenbaum, and Liam’s girlfriend, Melody. Their common grandfather — a holocaust survivor — has died, leaving a Chai necklace. The essence of the play centers around who wants — and who deserves — the necklace.

The characters are constructed in — at least from this Jew’s perspective — a stereotypical way. Liam is the typical secular Jew — atheistic in belief, and barely Jewish in heritage, with the typical non-Jewish blond and blue-eyed girlfriend. Davna is the type you meet at a Jewish summer camp: wearing her liberal and Israel-supporting Judaism on her sleeve; she’s strongly proud of it, but you don’t know how deep under the surface that pride goes. Jonah is more of an enigma: quiet, not wanting to make any trouble, the good kid. Melody is the non-Jewish girlfriend of no particular outward religious faith, but perhaps the most religious and moral of them all.

The play itself was at times laugh out loud funny, and at times darkly angry. My wife came away from it a bit disturbed. She felt the characterization of Daphna was too much of the “Jewish bitch stereotype”. It wasn’t something that would have been noticed three years ago when the play first arrived in LA, but in today’s #MeToo environment with a great sensitivity of how women are portrayed, it was a bit problematical. I also saw stereotypes in Melody: there was the immediate assumption that anyone blond and blue eyed was non-Jewish. Melody could very easily have been Jewish and just not saying anything; the question was never asked. We both noted that the playwright was a man: could this have been a problem with a man writing a role for a woman, and thus putting his perception of what Jewish women are into the characters, with them being shaped by a real Jewish women. This then raised the question of where the director, Dana Resnick (FB), came into shaping the play. After all, the current revival of My Fair Lady has been slightly reshaped for the modern era and a more liberated Eliza; was there enough directorial leeway to reshape the characters in a more realistic way (or was it forced by the dialogue). It was something we couldn’t answer, but we felt it was an interesting debate.

Other than that, we felt that the debate captured in the show represented a dilemma common with younger Jews today: what constitutes a “good Jew” in the modern era? Which character was the most deserving of the Chai? They all had legitimate claims. It is certainly a play that will leave you asking that question.

The performances themselves were strong. As Daphna, Jeanette Deutsch (FB) embodied the modern Jewish woman esthetic quite well. In other words: I remember her type from camp; I knew them and know them, and she captured it well. I thought she just went to the edge; my wife felt her a bit over-strident.

As her cousin, Jonah, Austin Rogers (FB) was much more in the background, not wanted to get involved. He didn’t scream; he observed and provided the rational foil for the characters around him.

As his brother, however, Noah James (FB)’s Liam was a different story. He was in your face and argumentative, seemingly wanting to pick a fight.  I will never forget the scene of him screaming at Dephna.

Lastly, Lila Hood (FB) captured the outsider nature of Melody quite well. Although all the characters had remarkable facial expressions, hers spoke the most while she watched the other characters arguing. She had an entire dialogue and reaction going on in that face that said volumes. She was just fascinating to watch.

As an ensemble, the four worked well together and had a believable family nature. As I said above for Lila, just watch their facial expressions. These actors are saying loads with their reactions while the other actors go at it. I don’t know if this is direction or something organic from the actors, but it was just a joy to watch.

Ob. Disclaimer: I am not a trained theatre (or music) critic; I am, however, a regular theatre and music audience member. I’ve been attending live theatre and concerts in Los Angeles since 1972; I’ve been writing up my thoughts on theatre (and the shows I see) since 2004. I do not have theatre training (I’m a computer security specialist), but have learned a lot about theatre over my many years of attending theatre and talking to talented professionals. I pay for all my tickets unless otherwise noted. I am not compensated by anyone for doing these writeups in any way, shape, or form. I currently subscribe at 5 Star Theatricals (FB) [the company formerly known as Cabrillo Music Theatre (FB)], the Hollywood Pantages (FB), Actors Co-op (FB), the Chromolume Theatre (FB) in the West Adams district, a mini-subscription at the Saroya [the venue formerly known as the Valley Performing Arts Center (VPAC)] (FB), and the Ahmanson Theatre (FB). Through my theatre attendance I have made friends with cast, crew, and producers, but I do strive to not let those relationships color my writing (with one exception: when writing up children’s production, I focus on the positive — one gains nothing except bad karma by raking a child over the coals). I believe in telling you about the shows I see to help you form your opinion; it is up to you to determine the weight you give my writeups.

The third weekend of April has one more show: The Hunchback of Notre Dame at 5 Star Theatricals (FB) (nee Cabrillo Music Theatre (FB)) on Saturday. The last weekend of April sees us travelling for a show, as we drive up to San Jose to see friends as well as Adrift in Macao at The Tabard Theatre Company (FB).