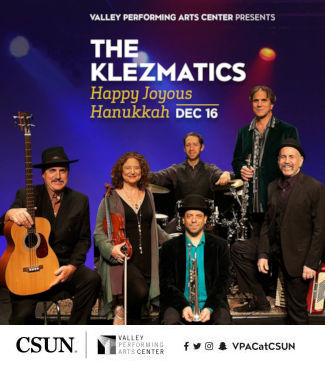 Can you think of a better way to celebrate Chanukah Hump Day (the 5th night) than to go to a concert of Chanukah Klezmer music by one of the best Klezmer bands around? I can’t.

So you can guess where we were last night. Why weren’t YOU there?

The Happy Joyous Hanukah concert by The Klezmatics (FB) at the Saroya (the venue formerly known as the Valley Performing Arts Center (VPAC)) (FB) was VPAC/Saroya’s last concert of 2017; it was also our last currently ticketed live performance event of 2017 (it is looking less likely that we’ll see A Christmas Story at CTG as they aren’t putting tickets up on Goldstar, and the Music Center celebration isn’t a ticketed event). It was the perfect way to send out the year, with toe-tapping klezmer music.

The show consisted of a number of songs from the Klezmatic’s album Happy Joyous Hanukkah, a few songs from their latest album Apikorsim, and a few other songs from other albums. Almost the entire band was there; Frank London wasn’t as he was out recuperating from surgery.

During the show, I was struck by the connection between some of my favorite styles of music: folk, bluegrass, celtic, and klezmer. They really are elements along a continuum, often united by the fiddle or other stringed instruments. The Klezmatics happily channel Woody Guthrie; Celtic musicians play Bluegrass. Of course, there are even broader connections. I know of Jewish Bluegrass musicians (Nefesh Mountain), and of course, we all know that the Talking Blues is the spiritual parent of Hip-Hop (and I’m even familiar with Bluegrass Rap music (Gangstagrass). I think it goes to show that musical “styles” are just labels, and don’t distinguish good from bad. Good music is what you like; bad is what you don’t.

I liked the music last night. Toe-tapping, energetic music. Great to get one out of a funk, if you had wandered into one. Great to bring out the joy of the holiday. If you get the chance to see the Klezmatics, do so.

I only have one question: They mentioned they have a staff Yiddishist. How do I find my daughter a job like that 🙂 ?

By the way: If you don’t know about the venue (the Saroya (the venue formerly known as the Valley Performing Arts Center (VPAC)) (FB)), you really should. This is a gem of a concert hall on the campus of Cal State Northridge, in the center of the West Valley, the square formed by US 101, I-405, CA 118, and CA 27 (Topanga). Take a look at their upcoming schedule on their website, and I’m sure you’ll find something you’ll enjoy.

Ob. Disclaimer: I am not a trained theatre (or music) critic; I am, however, a regular theatre and music audience member. I’ve been attending live theatre and concerts in Los Angeles since 1972; I’ve been writing up my thoughts on theatre (and the shows I see) since 2004. I do not have theatre training (I’m a computer security specialist), but have learned a lot about theatre over my many years of attending theatre and talking to talented professionals. I pay for all my tickets unless otherwise noted. I am not compensated by anyone for doing these writeups in any way, shape, or form. I currently subscribe at 5 Star Theatricals (FB) [the company formerly known as Cabrillo Music Theatre (FB)], the Hollywood Pantages (FB), Actors Co-op (FB), the Chromolume Theatre (FB) in the West Adams district, and a mini-subscription at the Saroya [the venue formerly known as the Valley Performing Arts Center (VPAC)] (FB). Through my theatre attendance I have made friends with cast, crew, and producers, but I do strive to not let those relationships color my writing (with one exception: when writing up children’s production, I focus on the positive — one gains nothing except bad karma by raking a child over the coals). I believe in telling you about the shows I see to help you form your opinion; it is up to you to determine the weight you give my writeups.

There is still the possibility that we’ll squeeze in a performance of A Christmas Story at the Canyon Theatre Guild (FB). More likely is going to the  58th Annual L.A. County Holiday Celebration, as they are featuring Klezmer Music from 3-6pm on Dec 24, and we can take advantage of Metro to avoid the traffic. Of course there will also be the obligatory Christmas Day movie — who knows — perhaps it’ll be the upcoming The Greatest Showman. Afterward: The obligatory Chinese Food.

If I can get tickets, January will start out with the Jason Graae/Faith Prince concert at the Rubicon Theatre (FB) in Ventura [tix]. The next weekend brings Aladdin at the Hollywood Pantages (FB). The rest of January is currently open, as January tends to be a quiet theatre month. We’ll see what fills up.

February is busier. It starts with the Cantor’s Concert at Temple Ahavat Shalom (FB). The following weekend brings our first Actors Co-op (FB) production of 2018: A Walk in the Woods. Mid-week brings opera: specifically,  Candide at LA Opera (FB). That is followed the next weekend by the first production of the Chromolume Theatre (FB) 2018 season, Dessa Rose. The month concludes with a hold for James and the Giant Peach at the Chance Theatre (FB) in the Anaheim Hills, and tickets for Dublin Irish Dance Stepping Out at  the Saroya (the venue formerly known as the Valley Performing Arts Center (VPAC)) (FB).

March was supposed to start with the MRJ Man of the Year dinner, but I’ll miss that because they pushed back from their advertised date right on top of my non-refundable tickets to the LA Premiere of the musical Allegiance at the Japanese American Cultural and Community Center (FB). This is followed by a HOLD for Steel Pier at the UCLA School of Television, Film, and Theatre (FB). The penultimate Friday of March brings Billy Porter singing Richard Rodgers at the Saroya (the venue formerly known as the Valley Performing Arts Center (VPAC)) (FB). The last weekend of March is open for theatre, but there will be the Men of TAS Seder.  Currently, we’re booking all the way out in mid to late 2018! We may also be adding a CTG subscription, given their recent announcements regarding the next season.