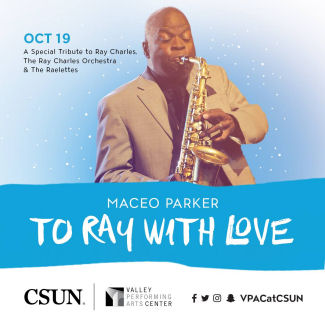 Last night saw us back at  The Soraya [the venue formerly known as the Valley Performing Arts Center (VPAC) (FB)] for a night of Jazz: Maceo Parker (FB)’s tribute to Ray Charles (FB) [who died in 2004], featuring the Ray Charles Orchestra and the Raelettes (Katrina Harper (FB), Karen Evans (FB), and Elaine Woodard (FB)). Alas, I had no paper and thus didn’t note down a set list. Musically, the orchestra was spectacular with a swinging sound that went well with both Parker’s voice and sax. The Raelettes joined for the latter third of the show and added some wonderful dimension and fun to the voices onstage.

That’s not to say the show didn’t have its problems. Here’s what I noted, from most to least annoying:

An artist’s manager should know proper show etiquette.  People attending a concert should know how to behave. I shouldn’t need to be saying any of the bullets above.

The drought has ended, and the last three months of 2017 are busy busy busy. The third weekend in October brings Bright Star at the Ahmanson Theatre (FB) on Saturday; on Sunday, I’m going to see a thriller penned by the fellow through whom we get our Saroya (VPAC) subscriptions, Schaeffer Nelson (FB) — Mice at the Ensemble Studio Theatre LA (FB) in Atwater Village. The weekend before Halloween brings This Land at Company of Angels (FB) in Boyle Heights

Looking into November, we start with the Nottingham Festival (FB) in Simi Valley, followed by The Man Who Came to Dinner at Actors Co-op (FB). The following weekend brings a Day Out with Thomas at Orange Empire Railway Museum (FB), as well as The Kingston Trio (FB) at the Kavli Theatre in Thousand Oaks (FB). The third weekend will bring Edges at the CSUN Theatre Department (FB) on Friday, the Tumbleweed Festival (FB) on Saturday, and Spamilton at the Kirk Douglas Theatre (FB) on Sunday. Thanksgiving Weekend will bring Something Rotten at the Ahmanson Theatre (FB) and hopefully Levi (a new Sherman Brothers musical – join the Indiegogo here) at LA Community College Camino Theatre (FB). November concludes with the Anat Cohen Tentet at the Saroya (the venue formerly known as the Valley Performing Arts Center (VPAC)) (FB).