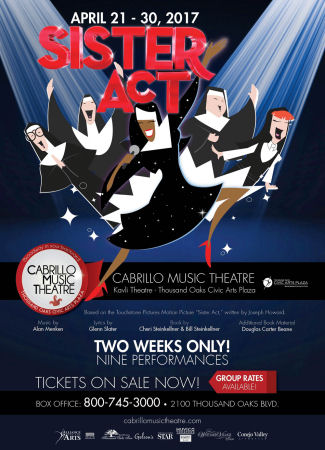 Ten and a half years ago we were subscribers at the Pasadena Playhouse (FB) when they presented the premier  of a troubled new musical, Sister Act. At the time, we could pinpoint a few suggestions, but overall, we enjoyed the musical, stating, “Wow! Call out the choir and sing it to the rafters, because this show has success written all over it.” (this was, of course, before I had realized that “Wow!” was trademarked by another professional audience member in Southern California). We had no problems with either the book by Cheri Steinkellner (FB) and Bill Steinkellner (FB), nor with the music by Glenn Slater (FB), nor with the lyrics of Alan Menken (FB). In fact, we looked forward to the cast recording. Since that November day, this little musical went off to Atlanta and then to London, where it had cast member changes, and saw extensive reworking of the book by Douglas Carter Beane. It got a cast recording, and then went off to Broadway — with some more book changes and song changes. It opened on Broadway, got some Tony nominations, but didn’t get a new cast recording. It went on tour, and came to the  Hollywood Pantages (FB) … where we didn’t see it, because we had seen it in Pasadena. A few years after that, it was released for regional productions, and Cabrillo Music Theatre (FB) picked it up for this season. This is a long way of saying that last night saw us in Thousand Oaks, revisiting the delightful musical Sister Act, and still wishing for a cast recording that had all the songs in the show in it.

Since we saw the show in Pasadena, some character names have been changed. A few songs have been added, and some have been dropped.  But the basics of the plot, which go back to the 1992 movie, have remained the same: black jive lounge singer witnesses a murder and turns police informant, and needs to go in hiding from her crime gang boyfriend. The police decide to hide her in a fading Catholic Church, amidst a superfluity (gee, and I thought the term was gaggle) of nuns. Mostly white nuns. Yeah, she won’t stand out at all. In any case, the Mother Superior objects and the two clash like oil and water. But this of course is the movies (and later, the theatre), so they must learn to love and appreciate each other. In this case, it happens by our nun-in-hiding taking over as choir director, and teaching the other nuns to repurpose 1950s and 1960s pop songs as Catholic anthems (and which, since that can’t be done in the theatre, to develop new songs that sound like 1950s and 1960s pop anthems but are not). These new songs bring new people into the church and save the church from being sold and the nuns dispursed. They also bring the spotlight to the church, leading the gangster boyfriend and his, umm, gang to figure out where the nun-in-hiding is hiding. A chase then ensues, which in the movie takes place in Las Vegas, but since the Las Vegas set was stolen by the gang from Honeymoon in Vegas, the theatre chase takes place in the nunnery itself. But in the end, everything comes together: the convent is saved, the Mother Superior and the nun-in-hiding grow to appreciate each other, the nun-in-hiding falls in love with the cop-who-hid-her (who had a crush on her in high school — fancy that!), and the gangsters, as in any show, turn into song-and-dance-men.

So what rewriting was necessary? Think of the plot as a skeleton. A certain series of adaptations were made to put the plot on the big screen. Not all of those work when one translates to the more limited stage, and so that movie plot was reworked for the first stage version. But there were rough spots still. Some songs didn’t work. Some points that may have been clear before — in particular, whether the conversion of the nun-in-hiding, Doris Collins → Deloris Van Cartier → Sister Mary Clarence, was a religious one or just an appreciation. Some character names were changed to — well, I don’t know why, perhaps to make them more stereotypical. The humor was punched up to a form that works better on the stage. The general consensus is that the changes worked — they made a better show. I do know they removed one song I liked from the London cast album, pretty much for logical consistency: the nuns sounded too good singing it, and it was before they were supposed to start singing well.

This is where the compare and contrast comes in. There probably aren’t many audience members that saw it in both 2006 and 2017. We did. We liked it then, and we liked it now. I think that, in general, they improved the story, tightened the songs, and created a production that worked. Further, Cabrillo executed that new production well, under the direction of Misti B. Wills. Wills created the cohesive whole of the cast, bringing them together to create a family that shows to the audience: these nuns really care about what they are doing and each other. That’s a key aspect to this story. She also helped them play for the humor. In fact, the show was so funny we had some folks behind us constantly saying, loudly, “Gee, that’s funny!” But I digress (they were also crushing their water bottles, whistling in my ear during the curtain call, and screaming that everyone should stand up, they were so good). Theatre newbie audiences. Sheesh.

One of the strengths of this production is the cast. Let’s start at the top, with our nun-in-hiding, Deloris Van Cartier → Sister Mary Clarence. I enjoyed the original, Dawnn Lewis, and I can imagine how strong Patina Miller (FB) must have been on Broadway (but, alas, she’s now been shuffled off to a desk job in the State Department), but Daebreon Poiema (FB) was spectacular. She had the comic chops, the dance moves, the personality, the look, and most importantly, the killer voice to take and own this role. I could name some numbers, but she is great in all of them.

Our group of thugs was led by Dedrick Bonner (FB) as Curtis, supported by David Kirk Grant (FB) (Joey), Kenneth Mosley (FB) (TJ), and John Paul Batista (FB) (Pablo). Their roles, alas, are written very shallow and stereotypical, but the script is what it is. They do their best with it, shining in numbers such as “When I Find My Baby” and “Lady in the Long Black Dress”.

The savior of Deloris — no, not that savior, the other savior (Officer Eddie Souther) — is portrayed by Wilkie Ferguson III (FB). Ferguson expressed a very pleasant, and affable personality that interplayed well with Deloris; he also did a very nice job with “I Can Be That Guy”.

The named members of our murder of nuns — wait, murders are for crows, who also dress in black — our superfluity of nuns were Cabrillo regular David Gilchrist (FB) as Monsignor O’Hara, Debbie Prutsman as Mother Superior, Francesca Barletta (FB) as Sister Mary Patrick, Karla J. Franko (FB) as Sister Mary Lazarus, Hallie Mayer (FB) as Sister Mary Martin of Tours, and Chelsea Morgan Stock (FB) as Sister (Novitiate) Mary Robert. Gilchrist, as usual, played the comedy well — we’ve seen him in quite a few roles now, and he is just a great character actor. Prutsman made a strong Mother Superior and played off Poiema quite well, especially in the opening scene of Act II and the reprise of “Sister Act”. Barletta, who again, we’ve seen many times, brought great humor and the requisite sillyness to Sister Mary Patrick (the original Kathy Najimy role). Franko’s Mary Lazarus has the requisite crustiness and handled the rap chops quite well. Lastly, Chelsea Stock, who astounded as Sister Mary Robert. Who knew such a big voice could be in such a small package? To quote Steve Stanley, “Wow!”.

Dancing and movement was choreographed by Michelle Elkin (FB), and was mostly 1950s and 1960s group dance movement, as opposed to the more intricate ballet we saw recently in An American in Paris.  What is more note-worthy is that Elkin was also the choreographer back in 2006 for the Pasadena Playhouse production.

Sister Act: The Musical plays for one more weekend at Cabrillo Music Theatre (FB). Tickets are available at the box office and through Ticketmaster. Discount tickets may be available through Goldstar.  It is a very enjoyable show.

Upcoming Shows: The last weekend of April brings the Renaissance Pleasure Faire on Saturday, and the new musical The Theory of Relativity at Harter Hall/Charles Stuart Howard Playhouse (FB) on Sunday. Lastly, looking to May, the schedule shows that it starts with My Bodyguard at the Hollywood Pantages (FB) the first weekend. It continues with Martha Graham Dance and American Music at the Valley Performing Arts Center (VPAC) (FB). The third weekend brings the last show of the Actors Co-op (FB) season, Lucky Stiff, at Actors Co-op (FB). May concludes with Hello Again at the Chromolume Theatre (FB), and hopefully Five Guys Named Moe at Ebony Repertory Theatre (FB).  As for June? Three words: Hollywood Fringe Festival (FB). That, barring something spectacular cropping up, should be the first half of 2017.