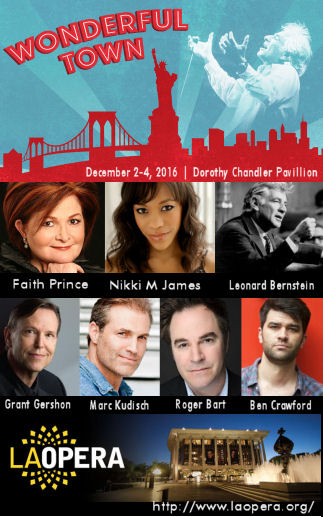 The first time that the musical Wonderful Town (music by Leonard Bernstein, lyrics by Betty Comden and Adolf Green) trod the boards of the Music Center‘s Dorothy Chandler Pavilion, it was in July 1975 under the auspices of the Los Angeles City Light Opera, in a production starring Nanette Fabray. This weekend, Wonderful Town returned to the Chandler, this time in a staged concert production as part of LA Opera‘s celebration of the 100th Birthday of Leonard Bernstein. It was truly a delight to see a form of musical theatre return to the Chandler; it had been absent since the LACLO decamped to the Pantages in the early 1980s. Even more so with this particular show, which demonstrated that after 63 years, it could still sparkle with delight and penache.

As for me, the desire to see Wonderful Town was part of my quest to see shows that I had only heard. I had only hear the original cast CD of Wonderful Town; the 2003 revival is on my wish list. The delight of the show does not come through on that cast album; the stories and personalities are a little flat. Last night put the pieces together, and I look forward to hearing the revival with more modern orchestrations.

The story of Wonderful Town is based upon is Joseph Fields and Jerome Chodorov‘s 1940 play My Sister Eileen, which in turn originated from autobiographical short stories by Ruth McKenney first published in The New Yorker in the late 1930s and later published in book form as My Sister Eileen. It tells the story of Ruth Sherwood and her younger sister Eileen, who come to New York from Ohio to find fame and fortune: Ruth as a writer, and Eileen on the stage. The plot is light and there are a batch of colorful characters — Mr. Appopolous who owns the building from which they rent a room; Speedy Valenti, who owns a nightclub; Robert Baker who works at a local newspaper; Helen and Wreck, a couple in the building. The characterizations are similarly broad: Ruth is an extremely smart and brash writer who turns off men with her intelligence, Eileen is a ingenue who charms all the men around her. It is very easy to see how this became an early sitcom on TV. You can find the full plot synopsis over on the Wikipedia page.

The LA Opera production, unlike the previous LA Civic Light Opera production, was a concert staging. The principals were all on chairs on the stage, on-book,  going to podiums when they were singing or speaking. They were backed by LA Opera chorus, and joined on a few numbers by a set of dancers. The orchestra and conductor was similarly on-stage. There were no sets other than some projections; the primary props were hats to distinguish different characters. Everyone was dressed in black. This doesn’t mean it wasn’t fun to watch — the cast and the singers appeared to be having great fun with the show. The concert performance was adapted by David Lee, who also served as the director. Choreography was by Peggy Hickey.

As I noted above, this was the first time I had heard the music in context. There was definitely that Bernstein feel and flair to the music, and the lyrics by Comden and Green seemed much fresher than one might think after 63 years. As always, songs like “Ohio” were earworms, but other songs made much more sense, such as “One Hundred Easy Ways”, “Conga!”, “Conversation Piece”, and “My Darlin’ Eileen”. On the album, you can’t see how these advance the story; on stage, you can. Note to self: I must get that 2003 revival album.

The leads in this production were spectacular. In the primary positions were Faith Prince (FB) as Rose Sherwood and Nikki M. James (FB) as Eileen Sherwood. Prince brought her wonderful comic timing, singing voice, and flair and love of the material to the role. One could clearly see she was having fun up there in all her numbers, but especially in songs like “Conga!” James was also a delight to watch, capturing the role with perfection and comic fun. She was also having fun with the dancing, both in the “My Darlin’ Eileen number and in the scenes at the Viage Vortex”.

On the male lead side was Roger Bart (FB) in far too many roles to list them all (but particularly as the narrator and almost every other major character), and Marc Kudisch (FB) as Robert Baker, the editor of the Manhattanist. Bart was a comic whirlwind, changing characters, voices, and characterizations at the drop of a hat. Literally. He would change hats constantly, and with each hat taking on a new role, from narrator to Speedy Valenti to Delivery Boy to Chick Clark (Newspaper Man) to Policeman to Shoreman. Incredible. Kudisch only had one role — the older newsman Robert Baker — but he nailed it. He was particularly touching in his number “It’s Love”.

Finally, turning to the creative credits: the wonderful projections were by Hana S. Kim. They exhibited a depth and playfulness I hadn’t seen before. Lighting design was by Azra King-Abadi. There was no credit for sound design; I got the distinct feeling that the actors were not amplified, and the wonderful sound we were hearing was through the projection of their voices in the hall alone. Take that, Ahmanson acoustics! Additional production credits: Jim Carnahan CSA (Casting Consultant), Trevore Ross (Assistant Director), Lyla Forlani (Stage Manager), Jeremy Frank and Miah Im (Musical Preparation).

I believe there is one more performance of Wonderful Town tonight.

Ob. Disclaimer: I am not a trained theatre critic; I am, however, a regular theatre audience member. I’ve been attending live theatre and concerts in Los Angeles since 1972; I’ve been writing up my thoughts on theatre (and the shows I see) since 2004. I do not have theatre training (I’m a computer security specialist), but have learned a lot about theatre over my many years of attending theatre and talking to talented professionals. I pay for all my tickets unless otherwise noted. I am not compensated by anyone for doing these writeups in any way, shape, or form. I currently subscribe at Cabrillo Music Theatre (FB), the  Hollywood Pantages (FB), Actors Co-op (FB), the Chromolume Theatre (FB) in the West Adams district, and a mini-subscription at the Valley Performing Arts Center (VPAC) (FB).

Past subscriptions have included  The Colony Theatre (FB) (which went dormant in 2016), and Repertory East Playhouse (“REP”) (FB) in Newhall (which entered radio silence in 2016). Through my theatre attendance I have made friends with cast, crew, and producers, but I do strive to not let those relationships color my writing (with one exception: when writing up children’s production, I focus on the positive — one gains nothing except bad karma by raking a child over the coals).  I believe in telling you about the shows I see to help you form your opinion; it is up to you to determine the weight you give my writeups.

Upcoming Shows:  Next week brings the CSUN Jazz Band at the Annual Computer Security Applications Conference (ACSAC), and Amalie at the Ahmanson Theatre (FB). The third week of December brings  The King and I at the Hollywood Pantages (FB). December concludes with an unspecified movie on Christmas day; and a return to our New Years Eve Gaming Party.

Turning to 2017, January currently is quiet, with just Zanna Don’t at the Chromolume Theatre (FB) on January 16. We may get tickets to Claudio Quest at the Chance Theatre (FB) on January 28. February 2017 gets back to being busy: with Zoot Suit at the Mark Taper Forum (FB) the first weekend. The second weekend brings 33 Variations at Actors Co-op (FB). The third weekend has a hold for the WGI Winter Regionals. The last weekend in February brings Finding Neverland at the Hollywood Pantages (FB). March quiets down a bit — at least as currently scheduled — with the MRJ Man of the Year dinner,  Fun Home at the Ahmanson Theatre (FB) at the beginning of the month, and An American in Paris at the Hollywood Pantages (FB) at the end of the month.