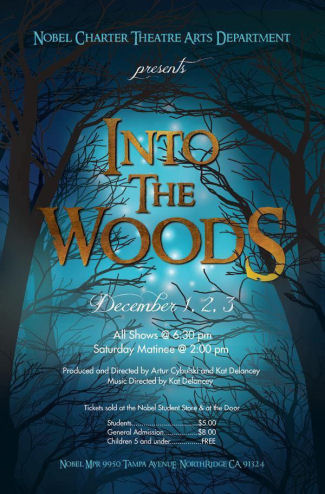 Life is a journey, and there are many lessons to be learned along the way. A number of these lessons are captured in Stephen Sondheim‘s 1987 musical Into The Woods, which is currently trodding the auditorium boards at Nobel Charter Middle School (FB) in Northridge. Last night, we went to the Alumni Night performance of the show (essentially, a preview for a receptive audience before opening; our daughter was involved with their charter productions the first two years). I’ll note that this was the first production under new leadership for the Nobel Charter Theatre Arts Department. The founding teachers have moved on to bigger and hopefully better things: Fanny Araña to the position of Magnet Coordinator for Van Nuys High School, and Jean Martellaro to the English Department at Porter Ranch Community School. The Nobel Drama program is now under the direction of Kat Delancy and Artur Cybulski (FB); this production was not only a trial by fire for the students, but a trial by fire for the teachers as well. They certainly didn’t choose something easy for the first show, but that’s the Nobel way — bigger and better, every time.

Into the Woods, with music and lyrics by Stephen Sondheim and book by James Lapine, is not an easy show. Unlike past Nobel shows, Sondheim shows have complex melodies and complicated lyrics. They also tend to have much deeper meanings within. Into the Woods is one such show. Although relatively accessible through its use of common fairy tale tropes (Jack in the Beanstalk, Little Red Riding Hood, the Baker and his Wife, and many others), Sondheim and Lapine weave these multiple stories into a morality piece, teaching many life lessons about the distinction between the fairy tale world and the real world. If there was any overriding themes to the piece, they are embodied in the statement that “Children Will Listen”, and “Be Careful What You Wish For”. It is at times a dark and foreboding piece; there are numerous meaningless deaths. It doesn’t hide the horror in the stories, but ends on an uplifting note (unlike, say, Sondheim’s Sweeney Todd) — you can teach your children. Whether the middle-schoolers performing this were able to pick apart all the lessons in this show I don’t know. I hope that its development provoked some interesting discussions. I’m of the firm belief that theatre can teach more than drama — it can challenge the mind and the spirit, it can be a space to explore dangerous ideas in a safe way.

I’m not going to try to summarize the plot — you can read it over on the Wikipedia page.

Most schools, when presented with a piece such as Into The Woods, retreat to the safety of the licensed “Junior” version. This brings the running time down from three hours, and is essentially just the first “happy” familiar half. It eschews some of the more questionable themes that one might not want to expose to young minds (never mind the fact that those minds have been long exposed to those themes through the Internet). The Nobel Drama team opted instead to license the full version, and pare down much — but not all — of the second half. In particular, they excised the notion of the princes cheating on their wives and of the affair in the woods. They also changed some words here and there (I particularly remember Jack’s mother’s line, where the word “touched” was changed), and I noted that some songs (in particular, the reprise of “Into the Woods” at the end of Act I) were cut (removing my favorite lines, “The closer to the family, the closer to the wine”, and “Slotted spoons don’t hold much soup.” — always great advice to remember). But those unfamiliar with the show probably wouldn’t catch all of that.

They also made some changes particular to a middle-school large cast: they split the narrator into two, and preserved the movie’s distinction from his being the old man, and they added a choral ensemble that came in on major numbers such as “Into the Woods”. This worked just fine; I particularly liked the effect of the ensemble on the show.

[ Note: Unlike my other writeups, I’m not going to attempt to link all the performers. Few, if any, will have professional pages; it seems odd to be linking to Facebook pages of middle-school students. Plus, there are so many of them 🙂 ]

Before I talk about the performance, I must note that this was a middle school cast, at a public school. There was a wide variety of talent, much of it raw. Some songs and performances were a little bit off, but this was head and shoulders above the typical middle school performance you might expect. This being a school and not professional, I’m not going to cite any particularly weak performances (especially as this was essentially a preview and problems are still being worked out). I will note, broadly, the importance in a Sondheim show of making sure that all the words of the song are clear, and that they are said/sung in a way that the audience can here them. There’s lots of hidden meaning in those words; for impact, they need to be clear.

Within the performances, there were some gems I would like to particularly highlight. First and foremost was the production’s Cinderella, Natalie Chavez. She had a very strong voice and handled the songs wonderfully; she also performed and emoted well. Her performance of “No One is Alone” was just spectacular. She is someone I hope will continue in the field — she just really impressed me.

Also strong in both vocal and performance were James Averill’s Jack and Harmony Nielsen’s Witch.  Averill impressed me from the start in the opening prologue with his strong, clear voice, and he seemed to be having a lot of fun with the role. Nielsen was also having fun with the role, and her “The Last Midnight” was just great.

Also worthy of note were the princes, Joseph Gelardi and Derek Bradford. They had the performance aspect down great, capturing the essence of “we’re charming, not sincere”. Quite fun to watch. Also good performance-wise were Gannon Ripchik’s Baker, Sarah Borquez’s Baker’s Wife, and Nina Krassner-Cybulski’s Red Riding Hood.

Jordan Ellison and Erin Miller did a good job as the narrators.

Kat Delancy and Artur Cybulski (FB) served as the directors and producers. The choreography was by Abi Franks, Kamryn Siler, and Daniela Johns.

Turning to the technical side: Long gone are the early days of the program, with no microphones, and lighting that couldn’t be adjusted and was overloading the electrical system. This performance had theatre quality sound and full theatrical lighting, reflecting work by sound engineer Tommy Chavez and Lighting Designer Artur Cybulski (FB). As this was a preview, there were some balance problems between the music and the vocals; those should be adjusted by tonight’s opening performance. The scenic design of Ben Tiber and Artur Cybulski (FB)  was also very strong, with one of the best sets I’ve seen at Nobel in ages. Again, I remember the early days of building the set for Grease; my my how this program has grown. Costumes and props were  on loan from Golden Performing Arts.

There were numerous other adult production staff, but you are likely tired of all these names by now.

P.S.: If you want to see a professional production, note that Into the Woods will be coming to the Ahmanson Theatre in April. Discount tickets are currently on Goldstar.

Ob. Disclaimer: I am not a trained theatre critic; I am, however, a regular theatre audience member. I’ve been attending live theatre and concerts in Los Angeles since 1972; I’ve been writing up my thoughts on theatre (and the shows I see) since 2004. I do not have theatre training (I’m a computer security specialist), but have learned a lot about theatre over my many years of attending theatre and talking to talented professionals. I pay for all my tickets unless otherwise noted. I am not compensated by anyone for doing these writeups in any way, shape, or form. I currently subscribe at Cabrillo Music Theatre (FB), the  Hollywood Pantages (FB), Actors Co-op (FB), the Chromolume Theatre (FB) in the West Adams district, and a mini-subscription at the Valley Performing Arts Center (VPAC) (FB).

Past subscriptions have included  The Colony Theatre (FB) (which went dormant in 2016), and Repertory East Playhouse (“REP”) (FB) in Newhall (which entered radio silence in 2016). Through my theatre attendance I have made friends with cast, crew, and producers, but I do strive to not let those relationships color my writing (with one exception: when writing up children’s production, I focus on the positive — one gains nothing except bad karma by raking a child over the coals).  I believe in telling you about the shows I see to help you form your opinion; it is up to you to determine the weight you give my writeups.

Upcoming Shows:  December theatre continues with a staged concert of Wonderful Town being performed by the LA Opera at the Dorothy Chandler Pavillion. The next week brings the CSUN Jazz Band at the Annual Computer Security Applications Conference (ACSAC), and Amalie at the Ahmanson Theatre (FB). The third week of December brings  The King and I at the Hollywood Pantages (FB). December concludes with an unspecified movie on Christmas day; and a return to our New Years Eve Gaming Party.

Turning to 2017, January currently is quiet, with just Zanna Don’t at the Chromolume Theatre (FB) on January 16. We may get tickets to Claudio Quest at the Chance Theatre (FB) on January 28. February 2017 gets back to being busy: with Zoot Suit at the Mark Taper Forum (FB) the first weekend. The second weekend brings 33 Variations at Actors Co-op (FB). The third weekend has a hold for the WGI Winter Regionals. The last weekend in February brings Finding Neverland at the Hollywood Pantages (FB). March quiets down a bit — at least as currently scheduled — with the MRJ Man of the Year dinner,  Fun Home at the Ahmanson Theatre (FB) at the beginning of the month, and An American in Paris at the Hollywood Pantages (FB) at the end of the month.